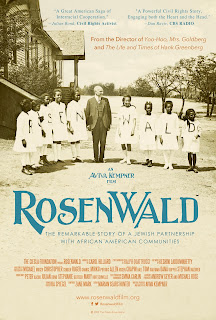 The documentary film Rosenwald tells the inspiring story of Julius Rosenwald, an immigrant’s son who became CEO of Sears, Roebuck & Company and used his wealth to support equal rights for African Americans during the Jim Crow era. His support of education, the arts, and housing for middle-class African Americans left a legacy that influenced the Civil Rights Movement and continues to resonate today. Rosenwald is told through archival film and photographs, feature film clips, and interviews with historians, museum curators, poets, Rosenwald family members, African American leaders, and Rosenwald school alumni.

- From the Rosenwald teaching guide

- From the imdb.com page for Rosenwald

Growing up in the South I had heard the name of Julius Rosenwald and was familiar with some of his philanthropy, but never realized the scale of what he accomplished until I watched this documentary. The movie begins with Julius' life and how he rose from a clothier to an owner and officer of Sears, Roebuck & Company. Because of the company's meteoric growth, Rosenwald's wealth ballooned. Under the tutelage of Rabbi Emil Hirsch and later from the writings of Booker T. Washington, Rosenwald began to get involved in philanthropy, focusing largely on the lack of educational and social opportunities available to blacks. One area of focus was helping build YMCAs and YWCAs for blacks by donating a portion of the money needed. In order to build a sense of ownership and control for the communities, Rosenwald challenged those who it would benefit to raise the remainder of the funds.

This would be an approach he would use when Washington asked Rosenwald for help with Tuskegee Institute and other educational opportunities for blacks. For the schools, Rosenwald would contribute a percentage, usually a third of what was needed. Those that would benefit were asked to raise the rest as well as build and maintain the schools. I see numbers ranging from 5300 to 5500 schools built throughout the Southern U.S. on this Rosenwald model. Given the climate in the South at the time, the schools became targets for arson and vandalism, but the determination of the black community to provide educational opportunities not available in the alleged "separate but equal" framework insured most schools would succeed. At one point, it is estimated that one-third of black students in the South attended a Rosenwald school.

Rosenwald didn't limit his gifts only to schools. He commissioned and contributed to housing developments developed specifically for blacks and established the Rosenwald Fund. This fund awarded money to schools as well as setting up fellowships, grants, and other funding to blacks showing artistic promise. The Fund would benefit such recipients as Langston Hughs, James Baldwin, W.E.B. DuBois, Ralph Ellison, Marian Anderson, and many others. Needless to say, Rosewald's influence stretched very far.

One of my favorite quotes from Rosenwald had to do with the esteem given to those with wealth, highlighting his own self-deprecation:

"Most people are of the opinion that because a man has made a fortune, that his opinions on any subject are valuable. Don't be fooled by believing because a man is rich that he is necessarily smart. There is ample proof to the contrary."

Julius Rosenwald deserves to be featured and promoted, and I hope this movie goes a long way toward doing that. What he was able to achieve with the funding of his projects can still be seen and felt today.

If you are looking for the movie, be aware there are two versions and they may show differing dates of release. The initial release of Rosenwald was one disc, containing the movie and a few bonuses. A couple of years later a two-disc version was released, with the second disc containing commentary about and interviews with those associated with the movie or the fund/schools.

Rosenwald rambles at times, but still gets my highest recommendation.

The National Trust for Historic Preservation has a searchable database of Rosenwald schools as well as a Preserving Rosenwald Schools booklet
"Of the 5,357 schools, shops, and teacher homes constructed between 1917 and 1932, only 10–12 percent are estimated to survive today."

Under the Kudzu is a movie that "traces the history of two Rosenwald schools in Pender County, NC. built during the segregation era. Alumni and former teachers share their experiences in this moving documentary about the African American sacrifice for education." I have not watched it yet, but plan to since it is currently streaming free for on Amazon Prime.