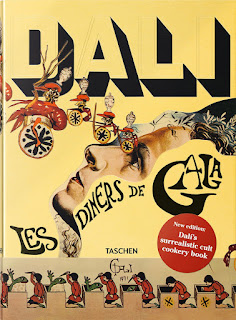 Since I missed this when it happened three years ago...
From MyModernMet.com back in 2016: Salvador Dalí’s Eccentric Cookbook Is Being Reissued for the First Time in Over 40 Years.

First published in 1973, Les Diners de Gala was a bizarre dream come true—a cookbook filled with surreal illustrations and recipes inspired by the lavish dinner parties that Dalí and his wife Gala organized. The parties were legendary for their wild opulence, with guests often required to dress in costume and wild animals left to roam free around the table.

Acclaimed publisher Taschen is reissuing the cookbook, available for pre-order, as only 400 of the original publications are known to exist. The book, which includes 136 recipes divided into 12 chapters, is arranged by courses—including aphrodisiacs. Aside from his illustrations, Dalí’s musings are scattered through the publication, giving insight into his philosophy on gustatory delights.

I wasn't familiar with this or the "companion" book that came out in 2017, Los Vinos de Gala. Fortunately my library has a copy of the cookbook, so I've placed a hold on it just to get a feel for the otherworldly I'm sure is inside it. I have a feeling it will be The Gallery of Regrettable Food writ large. Or maybe not. As NPR notes,

Though it's Dalí's cookbook, not all of the recipes originated in the artist's kitchen. He thanks the chefs of famous Parisian establishments like Michelin-starred Lasserre and La Tour d'Argent, art-nouveau bistro Maxim's and historic railway restaurant Le Train Bleu — originally known as Buffet de la Gare de Lyon — for their "highly gastronomical recipes." But it's the presentation of the dish, not the recipe, that earns a place on the table of a surrealist dinner party.

I'm much more interested in the wine book just to see how to make viniculture surreal, but it should be a strange trip all the same. For a glimpse of one of Dalí's parties:

i remember when this first was published... i'll see if i can get the library to order a copy... tx

I remember plenty of things from around that time, but not the cookbook's release.

Evidently the reissue was a big thing as well and I completely missed it, too. Guess I'm destined to catch up on a lot of things.

lol... me too, my memory gets more selective every day...