How to Think about War: An Ancient Guide to Foreign Policy by Thucydides 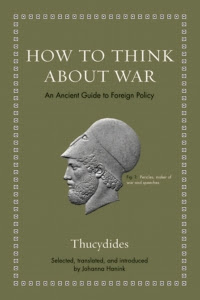 How to Think about War: An Ancient Guide to Foreign Policy by Thucydides
Speeches from The History of the Peloponnesian War
Selected, translated, and introduced by Johanna Hanink
Princeton University Press, 2019
Hardcover, 336 pages
Ancient Wisdom for Modern Readers Series

I had not read any of the releases in Princeton University Press' Ancient Wisdom "How to" series but I wanted to find out what was in this volume. The title and subtitle are a little misleading since the six speeches from Thucydides' The History of the Peloponnesian War address more than simply war and foreign policy. The speeches, just like the work as a whole, look at human nature, imperialism, justice, human behavior, power, and so much more. Regardless, the speeches provide a good introduction to Thucydides for anyone that hasn't read the History, which as Hanink notes in the Introduction, can be "long, dense, and difficult." That might be a little overstated since someone like me can stumble my way through it, but I definitely remember being turned around at times when I read it. That being said, the work is intensely rewarding for the effort put into reading it. Think of this volume as a "highlights" reel, not capturing everything but giving you some of the high points.

are especially rich in abstract reflections on war, human behavior, and what today we call political theory. It is also undoubtedly "in the speeches that much of the most explicit analysis of the nature of Athenian imperialism appears." ... This volume seeks to make the speeches more accessible by presenting them together, in a new translation that is faithful to the Greek but which also aims to be fresh and approachable. (xviii)

I like the focus on speeches since these were set pieces in Thucydides' History. He admits that they aren't precisely what was spoken at the time but they retain the spirit of what was said. Obviously this allows him latitude in constructing the speech to make the point(s) he wants the reader to take away from the passage. Hanink quotes C. W. MacLeod, who sums up that when Thucydides characters speak, "they are doing so with something to say, something to hide, something to achieve at a particular time and place." (liv) All of the speeches are by Athenians (and who provide one side of the Melian Dialogue). This focus by Hanink on the Athenian perspective opens "a window onto one particular community's influential and fascinating, but also extraordinarily tendentious and slanted, vision of the world and of itself." (xlvi) Speeches also lay out the reasoning in the speaker's attempt at persuasion toward or explanation for their goal.

Hanink's introduction provides an overview to Thucydides and the History and her notes for each speech help place the excerpts in context and summarize the points the speaker makes. She notes a common theme within the excerpts: "Each of the speeches in this volume contains remarks upon the origin, validity, and character of the Athenian empire." (xx) On the surface, the speeches are full of praise for Athens, laying out the reasons why it is superior to the rest of the Greek world. Thucydides undermines these messages by showing Athenian actions after the speeches that could be antithetical to what was just said. Those actions can be unsettling, although they aren't shown here, so the reader of just the speeches will miss Thucydides' implied criticism of Athens (although Hanink does provide some summaries). Even so, there is enough included in the speeches to realize not everything is as claimed. Pericles' first war speech anticipates future criticism he knows he will hear when the war turns difficult, and while inciting the Athenians to war he also cautions not to make it a war to expand their empire. You hear echoes of these exhortations in his last speech where he defends his strategy. The lofty rhetoric and praise in the funeral oration sets up an ideal of Athens that is impossible to live up to, and the plague that follows will demonstrate how short the Athenians fall in measuring against those principles. The Sicilian Debate essentially turns into farce from the speakers' political maneuverings for personal gain and glory, but the pending slaughter and devastation of the Athenian army on the island looms ominously for the modern reader who already knows the outcome.

It is the Mytilenean Debate and the Melian Dialogue, though, that are the most unnerving of the speeches. In explaining the harsh reaction of Athens to cities that rebel, Athenian representatives demonstrate a political realism that makes the reader realize Athens doesn't care about justice or other lofty ideals when it comes to other cities. Their only concern is Athens' own interests, regardless of the brutality involved. Even when there is a just outcome, such as sparing the Mytilenians from complete destruction, the reasons behind it (allowing them to live so Athens can collect their tributes) have nothing to do with justice or any other lofty ideal. I've listed the speeches included below this post and linked them to my amateurish attempt to summarize and comment during my first reading of the History.

The Ancient Wisdom series reminds me of classical handbooks (for lack of a better term) that used to provide writings from a particular classical writer or extracts around a particular topic from various ancient authors. Their stated goal is to present "the timeless and timely ideas of classical thinkers in lively new translations," ... making "the practical wisdom of the ancient world accessible for modern life." Regarding translation, Donald Kagan noted that Thucydides' "style is often very compressed and difficult to understand, so that any translation is necessarily an interpretation,” and Hanink herself said "Thucydides’ Greek is so difficult that even ancient native Greek speakers struggled with it." As Mary Beard has pointed out, this has implications in balancing the quality of the translation (making it easy to read) against capturing the character and flavor of Thucydides' text. I will say Hanink's translation is more direct and modern than the "older" translations I've read (Hobbes, Crawley). I'm not sure why the Greek text of the speeches are included, maybe to pad out the book or more likely to give it the "classical handbook" feel.

I like the idea of making these classical texts "accessible," even if that means excerpts instead of the complete works. I'd like to encourage reading all of Thucydides' History since it is a master class in strategic thinking, foreign policy, imperialism, and human nature, as well as covering the complexities of the Peloponnesian War. I understand if you're not ready for that level of commitment, though, and I highly recommend How to Think About War as a suitable précis for sections of the History. Hopefully it will move you to explore more!

The Speeches
(with book and chapter numbers from The History of the Peloponnesian War; links are to my posts on that section)
On Justifying a War: Pericles' First War Speech (1:140-144)
On Dying for Your Country: Pericles' Funeral Oration (2:34-46)
On Holding the Course: Pericles' Last Speech (2:60-64)
On Realpolitik: The Mytilenean Debate (3:37-49)
On Ruthlessness: The Melian Dialogue (5:85-113)
On Launching a Foreign Invasion: The Sicilian Debate (6:8.4-24)

Excerpts from the book:
Introduction
Chapter 1
The Greek text presented is from the Loeb editions, which can be found online in editions 108, 109, 110, and 169), although the Oxford Classical Text edition was used for translation.

Podcasts with Hanink about the book:
The History of Ancient Greece Podcast, which can also be found here
Carnegie Council (audio and transcript)

Hanink's article at Eidolon: The Twists and Turns of Translation