It's been a while since I've fallen out of love with baseball, but I still enjoy a good baseball movie. Here are a couple of films I've watched recently that I can highly recommend. 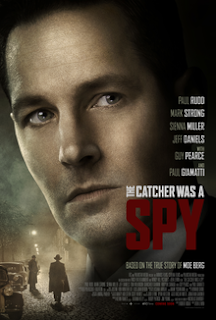 The first is The Catcher Was a Spy, based on the 1994 biography The Catcher Was a Spy: The Mysterious Life of Moe Berg by David Dawidoff. I was already familiar with the story about Moe Berg, a middling major league catcher who played important roles for the U.S. war effort during World War II. The first incident came when Berg was included with an all-star baseball team visiting Japan and playing goodwill games with Japanese baseball teams. He was included because he was able to quickly learn languages, plus he had visited Japan two years earlier (a fact not included in the movie). Having contacted MovieTone News before the team left, he carried a movie camera with which he was able to film parts of Tokyo Bay and other important industrial and military sites in Japan. Several years later (after Pearl Harbor) he made the films available to the U.S. military.

Berg gained a government position during the war and eventually applied and worked for the Office of Strategic Services. The movie focuses on this part of his life, especially the mission he was given to attend a lecture by Werner Heisenberg in Switzerland. He was to evaluate if Germany was close to achieving an atomic bomb or if he thought Heisenberg would help them build them. Berg was given the green light to assassinate Heisenberg if he thought it necessary to stop the German's project. The irony in the mission plays with the Heisenberg uncertainty principle—regarding the status of the German atomic bomb project, can Berg successfully measure/evaluate both the position (where they are at) and velocity or momentum (will Heisenberg help them succeed soon)? Paul Rudd captures the complexity of Berg and the remaining cast provides strong support. Fortunately the movie skips his later life, which isn't a pretty picture in Dawidoff's book.

This interview with director Ben Lewin at the Sloan Science & Film site gives some background on how he became involved in the film and how some of the actors prepared for their roles.


Official trailer for The Life and Times of Hank Greenberg

The Detroit Tigers had an AA farm team where I grew up, the Montgomery Rebels of the Southern League. I got to see such players as Alan Trammell and Lou Whitaker on their way up to the majors, as well as some rising stars on other teams such as Vida Blue. I became a minor fan of the Tigers, and even though his career was over I appreciated Hank Greenberg's accomplishments. If you're not familiar with this all-star, Aviva Kempner's documentary The Life and Times of Hank Greenberg is a great place to start. Anchoring first base for the team during the 1930's (later moved to the outfield), Greenberg was an all-star hitter and one of the greatest sluggers to play the game. He also became one of the first major Jewish sports stars. Detroit, at this time, was a hotbed of anti-semitism but Greenberg displayed class and courage, realizing he was in the spotlight and would be judged harsher because of it. Greenberg also became a friend to Jackie Robinson during his rookie year and supported him during the struggles Robinson faced.

Kempner has become an accomplished documentarian, and in this, her first release, she pieces together interviews from sports figures, family members, celebrities, and fans to provide an engaging story arc of his life and career. Greenberg's Jewishness is the central focus of the story, but his accomplishments transcend trying to pigeonhole him with any identity. From the film's website:

“Hammering Hank” Greenberg’s career spanned the years when our country faced the enormous challenges of the Great Depression and World War II. He played first base and outfield for the Detroit Tigers from 1933 to 1946 and for the Pittsburgh Pirates in 1947. Known as a self-made star and notorious for his hours of daily practice, Greenberg was recognized by sportswriters as “one of the greatest power hitters.”

In 1938, he achieved tremendous fame when he fell two homeruns short of matching Babe Ruth’s record of sixty home runs in a single season. He was chosen Most Valuable Player in 1935 as a first baseman and again in 1940 as a left fielder. He batted in more than one hundred runs per season seven times in his career. His lifetime batting average was .313 and his career home run total was 331. In 1956 he received baseball’s highest honor when he was voted into the Hall of Fame.

The highlights of his inspirational career constantly made the national headlines and captured the imagination not only of sportswriters but also of his loyal fans. His l938 attempt to beat Babe Ruth’s home run record was followed closely in the press and by baseball fans all over America. In May 1941, Greenberg again made headline news as the first star ballplayer to enlist in the Armed Services. In June 1945, he was the first ballplayer to attempt a comeback after so long an absence from the sport. He did so successfully by hitting a home run in the first game he played upon his return. In l947, Greenberg set another benchmark when he became the first major league baseball player to earn more than $100,000 per year.

It turns out there is a tie-in between the two movies: Aviva Kempner is making a documentary about Berg currently titled The Spy Behind Home Plate that is scheduled for release later this year. Have fun with these or other baseball movies as the season starts.