Do you keep track of your books?

Yesterday I was in a used bookstore and they had several Library of America books in good shape, ranging from $8 to $12. I wanted to pick up several of them, but a few of the books were by authors that had multiple volumes in the series. A couple of them I knew I didn't have, but a couple of books I wasn't sure if I had them or not (due to forgetfulness and a family member "borrowing" and not returning one). I was wishing I had a list or database of some sort to check against, so I was wondering if anyone kept track of their books for just such a situation. It seems like overkill, but I'm not always going to be able to text my boys to send me pictures of the bookcase so I could see if I already had a certain book.

I thought I wouldn't need such a list for too many books or series, but after buying a used history book to replace one I thought I had culled (and had not), I'm wondering if I need to include more in such a database/list. So do any of you keep such a list for your books? And if so, how do you do it?

Thanks! Oh, by the way, here's the first picture my son sent me to make sure he had the right bookcase. I'll need to take better pictures of the bookcases on our landing and post them after I rearrange them to fit the latest acquisitions. They came about totally by accident, but I dearly love them. 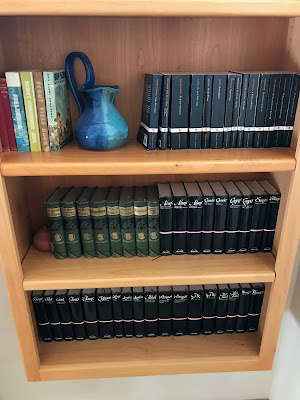 Beautiful. If you haven't already, you might investigate LibraryThing:

I have almost 2,800 books cataloged, and it's helped me several times in situations just as you describe.

I love those Library of America books too, and wish I had more.

I'll check it out. Thanks!

Yeah, I've been slowly picking up some of the LoA books since I got their first releases (Poe) when they started. I had to limit myself yesterday, but I will be revisiting that store as soon as I can afford it.

No, and thank goodness for that, but I do not really buy so many books anymore.

I'm trying not to, but seem to be failing. Although I did have a few sizable culls this year. They still seem to be finding a way into the house, though.

i began just writing down what i read in a common book. i always meant to alphabetize or catalog in some way, but time in it's inexorable tide... so now i have multi-pages of books in no sort of order; each time i want to look up one i have to leaf through a hundred or so pages, but it's too late to do anything about it... soo: quandary...

I have that problem, too, and need to find a better system for keeping up with things. Although that was one reason for having the blog.

We don't keep any kind of list (I know one person who does, obsessively, and she checks it before she buys anything new), and we buy books--new and old--constantly and end up with multiple editions of quite a few titles. We just don't worry about it, as it sometimes comes in handy when we are both reading the same book (as we are presently, with Middlemarch). We each read different translations of Proust, and tend to like different translators of dead Russians, too. So it all works out, and we don't believe in the concept of having "too many" books.

Just for the record, I can't make fun of anyone that keeps such a list since I used to do that with my album collection. My former album collection, that is. But then, that was when I thought I was going to buy and run a record store. How plans get so far off track...

I like the idea of comparing different editions/translations (and I've done it by myself...and hope to post on it later this year). I often do it myself when reading something I have on the shelf that has minimal notes/references as compared to other editions that have more detailed annotations (available from the library).

Mary and I usually read different translations of Dostoyevski and compare scenes. We are both highly opinionated and generally (and pointlessly, I admit) defend the translations we're reading. It beats watching television.

I keep track, on my blog, of the books I've read, but that is no help at all with the immense TBD backlog.

As long as it doesn't descend to the level of Dan Akyroyd in Point/Counterpoint on SNL, I'm sure it's all good.

I completely understand about the backlog...all too much. Good luck with yours!

Another vote for LibraryThing. I collect first editions of my touchstone writers and am often in a secondhand bookshop trying to recall whether I have a first of a particular edition.

I've checked it out and it looks like what I need for certain series. Thanks for the additional vote.

I can see where that can cause confusion...knowing you have a certain book but uncertain as to what edition. Good to hear you have a method to sort it out.