An appreciation and note of gratitude for David Womack

I received word that David Womack, a true mentor and influence on my life, passed away on July 11, 2018. For someone that had such a huge, giving heart, it's a sad irony that it was that physical organ that failed him.

For a few semesters when I was in college, I lived at his house in Tuscaloosa. At the time I appreciated all he did, but I wasn't capable until much later to fully fathom what all he had done for me. His selfless actions in the service organization we were a part of was truly inspirational.

It's my fault that a post thanking him for all he did has not appeared here before now, so I guess I'm trying to make up for it. The best I can hope to do is pass on to my boys his spirit of service and dedication to others.

So here's a totally embarrassing pic (yeah, I'm in there somewhere) taken outside of David's house, I'm guessing from the fall of 1982. The poses are an inside joke... 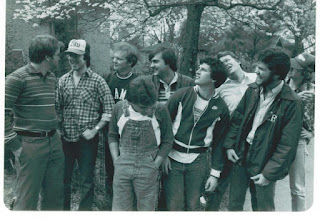 David Womack died July 11 at Druid City Hospital of congestive heart failure, but leaves an inspiring legacy through hundreds of members of Circle K (CK) whom he advised for decades at the University of Alabama (UA). He also was District Administrator for CK for years.

David’s calling for the past 43 years was developing young people into leaders in community service. Under David’s Leadership, The University of Alabama’s Circle K and the Alabama district had students elected to district and international offices. Trophies and plaques were won by his members, the Alabama District, and by David himself. Circle K chapter scrapbooks won awards. He was a Tuscaloosa Kiwanian for years, served a term as president and was on the board at the time of his death. His most prized Kiwanis award was the 1989 Circle of Service Award, created to “recognize & honor an individual within Kiwanis International who has made the most outstanding contribution to all of Circle K International.