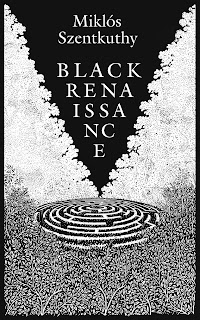 Contra Mundum Press has made available some excerpts from the forthcoming book Black Renaissance by Miklós Szentkuthy, the second volume in his St. Orpheus Breviary series. The samples can be found at this link. Needless to say, I'm excited and looking forward to the release.

The sample contains the beginning of the introductory essay by Nicholas Birns, "Startling Dryness: Szentkuthy's Black Renaissance." An earlier version of Birns' essay can be found in the July 2013 special issue of Contra Mundum's journal Hyperion. The journal also contains more of the second section on Brunulleschi than the sample does.
Note: I initially assumed Birns' essay in the book was the same as the earlier online version. Contra Mundum kindly let me know the essay has been updated and revised and I have corrected my comment. Thanks for the correction!

A few excerpts from back cover of the book (the last page of the sample), parts of which were also used on the cover for Marginalia on Casanova:

Black Renaissance, the second volume of the St. Orpheus Breviary, is the continuation of Miklós Szentkuthy's synthesis of 2,000 of European culture. St. Orpheus is Szentkuthy's Virgil, an omniscient poet who guides us not through hell, but through all of recorded history, myth, religion, and literature, albeit reimagines as St. Orpheus metamorphosizes himself into kings, popes, saints, tyrants, and artists. ... "Orpheus wandering in the infernal regions," says Szentkuthy, "is the perennial symbol of the mind lost amid the enigmas of reality. The aim of the work is, on the one hand, to represent the reality of history with the utmost possible precision, and on the other, to show, through the mutations of the European spirit, all the uncertainties of contemplative man, the transiency of emotions and the sterility of philosophical systems."

There's more on the back cover of the three characters dominating the book, and the introductory essay goes into detail about why St. Dunstan was chosen as the opening/guiding saint chosen for Black Renaissance. I'll close with some comments from Szentkuthy’s prospectus for the first volume, which provides a guide to the series:

The name “Orpheus” expresses the underlying conceptual tone: Orpheus wandering in the underworld is an eternal symbol of the brain straying among the dark secrets of reality. The aim of the work is, firstly, to portray the reality of nature and history with ever more extreme precision, and secondly, to display through variations in the history of the European mind an observer’s every uncertainty, the fickleness of emotions, the tragic sterility of thoughts & philosophical systems. The reason for placing the epithet “Saint” before “Orpheus” is because the work seeks to portray both European history and the vegetative world of nature from an essentially religious, supernatural viewpoint. Although both the lives of the saints, as well as the other figures, famous books, and cultural manifestations of history are, in point of fact, nothing more than different features of a lyrical self-portrait, the various roles and masks of the author as it were, the work is in essence “religious,” because form love to politics the emphasis throughout is on the battle of the body-politic of God and the body-politic of the world.

Thanks for the post. Birns' essay has been rewritten so the version in the book is different from the one published in Hyperion some years ago.

Thanks for the clarification. I will correct my comment.

Ohhh, you know I'm going to need this. I see that St. Orpheus' Breviary consists of TEN VOLUMES, and the first one was published in English 5 years ago. I hope I won't die before the rest are translated? Did you get a review copy? I'd ask for one but I haven't read vol. 1 yet and presumably I should, which could take a while given that it doesn't seem too easy to get.

The subject matter in the books is so wide-ranging that I don't think it matters which order you read them in, at least the first two. Definitely read the samples to see if you enjoy the style. Szentkuthy covers so much ground in such detail that I feel ignorant in comparison...it's definitely an education.

I didn't ask for a review copy because my time is so limited and I feel like I've let several publishers down for not posting (or not in a timely manner) when I have gotten copies. I have already ordered the book, which you can do directly from Contra Mundum's website.

I have no doubt that I will be totally unable to wrap my brain around it! But I'm interested in Euro nationalism issues lately and the essay brings that up, so I'm inclined to give it a go.

I'm interested to hear what you think about him. I was hoping to get this before an upcoming trip, but I think I waited too late to order it. Worst case is it's waiting for me when I get back.