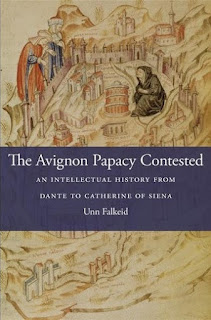 The aim of this book has been to explore some of the most significant critics of the Avignon papacy, critics who in many ways came to prepare the ground for the harsh disputes in the coming two centuries in Europe. The critics have been selected because of the strength and originality of their arguments, their authorial voices in the contemporary debates, and the general impact of their work on later generations. ... Despite their striking dissimilarities—an expelled Florentine poet [Dante Alighieri], a physician trained at the University of Padua and later a rector at the University of Paris [Marsilius of Padua], a Franciscan friar and theologian from England [William of Ockham], a humanist at the papal court in Avignon [Francis Petrarch], a princess from Sweden [Birgitta of Sweden], and an uneducated young woman from the Sienese popolo grasso [Catherine of Siena]—these thinkers shared a series of factors. Primarily, their works were produced during the era of the Avignon papacy, which they all profoundly despised. ... [E]ach of them challenged in specific ways papal power and the papacy's stay in souther France, and they all played key roles in contemporary public debates. Moreover, a network of people and events links them together, and some of them probably even met each other in person as well. Finally, together they offer us a rich and detailed glimpse of the bitter and multifaceted conflicts over the legitimacy of the Avignon papacy from 1309, when the pope settled in Provence, to Pope Gregory XI's final return to Rome in 1377. (176-7)

I remember my interest in the 14th century began when I read Barbara Tuchman's A Distant Mirror in high school. I knew I didn't understand everything going on, but the turbulence she described was fascinating to me. Plus it was the first time I heard or read about the Avignon papacy. I'm going to go out on a limb and predict this book won't be on too many holiday wish lists or "best of" lists, but it's one of my favorites of the year. Unn Falkeid has produced an overview of leading literary criticism of the papal move to Avignon in the 14th century as well as providing detail on how some of the critics' works addressed the problems they saw. There is a wealth of scholarship in this book, but Falkeid's "hope is that this book will spur on further interest. There is still much to explore...". (177) I'm in full agreement since there's quite a bit more I want to delve into after reading her book.

So what were these writers contesting? One area they focused on would be the struggle for power, both within the Catholic Church and between the church and states. Before the move to Avignon, Pope Boniface VIII issued the Clericus lacios bull in 1296, stating jurisdiction over clerics and their property was not subject to lay powers. Boniface later issued the bull Unam Sanctam in 1302, firmly asserting the pontiff's power over secular rulers. The pope, in other words, had full power on earth for spiritual and temporal matters. Even though this bull was later annulled by Boniface's (short-term) successor, the marker had been laid for the desired power of the papacy.

Pope Clement V moved the papacy and supporting cast to Avignon in 1305, where he and the next six popes resided until Pope Gregory XI moved the papal court back to Rome in 1377. Several of contesting writers saw Rome as the proper center for the church, but things didn't necessarily work out well on that front. Despite the return to Rome, the papacy was not fully embraced or welcomed. Political and religious turbulence flourished as religious schisms were on the horizon. Falkeid asserts in the introduction that she doesn't intend to give a detailed account, historical or otherwise, of the Avignon papal era. Instead she explores how writers of the time responded to the "Babylonian Captivity of the Papacy" and their political and religious implications.

The move from politically unstable Rome (and "Italy") to the more peaceful and pliant location of Avignon in southern France provided an opportunity for the papacy to bolster its power and wealth. Soon after Pope Clement V moved the religious court to this crossroad of trade and religious travel, Italian companies established trade/bank divisions located there, clearly following the money and power. They recognized what others would eventually see as the papal court bolstered their power and wealth in three main ways. First was the nomination of benefices, or appointing clergy to ecclesiastical offices. This move made priests, cardinals, etc. more indebted to the papacy. Second, Pope John XXII (1316 - 1334) began a system of papal taxes that created "an intricate, specialized fiscal system, which, together with the spoils from the newly banned Templars, rapidly developed the papal curia into a court that outshone all the secular courts in Europe in power and wealth." (21) Third was the growing power of the papal seat itself as it adopted a monarchical structure. This consolidated power and money insulated the pope not just from state leaders but also from high-ranking religious leaders attempting to challenge his power. Even with this consolidation of power and the resulting economic growth, the papacy would still have to navigate the tense political situation in Europe. It was the excessive claims of ecclesiastical power that led to much of these writers' criticisms.

Each chapter of the book provides a case study showing how the six figures tried to cope with the precarious situation that the Avignon papacy had created. Dante, Marsilius, Ockham, Petrarch, Birgitta, and Catherine did not only come to have a decisive influence on the political events of their time; as well as being significant political agents, their literary works dominated the agenda of the contemporary political and intellectual debates, with far-reaching effects for the political discourses of early modern Europe. (6)

Falkeid goes into some detail for these authors' criticisms and their suggested solutions. My brief notes here will cover only a few highlights of what she presents in the book. Dante, in Paradiso VI and Monarchia reveals how enamored he was with the Roman Empire. In Paradiso VI, Dante presents emperor Justinian looking at the separation of the powers of church and state and both of their divine origins. Since man has a dual nature of "the corruptible body and the incorruptible soul," man has two realms where he needs guidance. The emperor and the pope have similar missions but in different spheres, so the papacy's infringement on secular power caused Dante to lay out his concerns in Monarchia. Marsilius of Padua's Defensor pacis (The defender of peace) agreed with Dante that the church's creeping jurisdiction into political/secular matters was something to resist. Where Dante viewed both church and empire as divine gifts, though, Marsilius viewed both institutions as human inventions. Therefore power in each was to be derived from the people. Justice in each realm would be recognized by their smooth functioning, something sorely lacking in the 14th century. William of Ockham's Breviloquium de principatu tyrannico (A short discourse of tyrannical government) focuses on divine and natural rights granted as all human beings' fundamental liberties. This work, presented in the form of court testimony, examines the limitation of human rights granted by God and nature, which existed before any papal power. Because Ockham believed the pope's actions countered many of these divine and natural liberties, the pope was committing heresies.

In the mid-14th century, the writers Falkeid highlights begin to combine their attack of the physical location of the papacy with the ecclesiastical reforms that needed to be made. Petrarch's letter to Cola di Rienzo shows the author wading into the political fray after Cola's 1347 revolution in Rome. Petrarch's letter marks a trend in viewing papal legitimacy tied to its return to Rome. Birgitta of Sweden's Liber celestis revelaciones (Celestial book of revelations) records her visions as filtered through her scribes, translators, and confessors. Birgitta weaves politics and theology together as she presents herself as a widow of Rome, offering advice on how the miserable state of the church could be improved. Catherine of Siena's letters emphasized that it wasn't enough for the papacy to return to Rome—reforms were needed, too. While working as a peacemaker between warring factions in Italy, she made it clear she believed in the separation of powers between secular and ecclesiastical rule. She pointed out that the religious rulers would benefit from reforming the church in addition to returning to Rome. Not only benefiting the church, she predicted such moves would settle the chaos she witnessed in Rome.

By involving themselves in the political and ecclesiastical questions of the day, these writers helped shape some of the political thoughts of their time. While the book isn't meant as a complete overview of the times or of each author, it can serve as a wonderful introduction that should spur further investigation into the times and writings. Very highly recommended, especially for readers with some knowledge of the period.


A few of the books referenced

Great commentary. This sounds so interesting. Political and theological history is so interesting. I also found A Distant Mirror fascinating and like yourself, it sparked me interest in the period.

I have been really digging into some of that history, so this book hit the spot. I realize it's not going to be for everyone, but if it's in your area of interest it's extremely well done.