The Red Sphinx by Alexandre Dumas 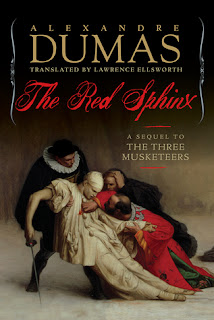 What is clear and undeniable in this painting is that it depicts a man of mind and intelligence, and nothing more. Here is neither heart nor spirit—fortunately for France. In the vacuum of the monarchy between Henry IV and Louis XIV, with a king so weak and diffident and a Court so turbulent and dissolute, among princes so greedy and faithless, to bring order out of chaos required a brain above all.

God created this terrible automaton [Cardinal Richelieu], placed by Providence exactly between Louis XI and Robespierre, in order to crush the great nobles, as Louis XI had crushed his "grand vassals," and as Robespierre would crush the aristocrats. From time to time, like red-stained comets, there appear these machines of history, these great harvesters that advance of their own accord, cropping the field of state, remorseless, relentless, stopping only when their work of scything is done.

So Richelieu would have appeared to you on that evening of December 5, 1628, when, aware of the hatred that surrounded him, he was nonetheless intent on the great projects he contemplated: exterminating heresy in France, driving the Spanish from Milan, and expelling Austria from Tuscany. He it is who appears before you in his study, trying to speak without betraying himself, to see without revealing, that impenetrable minister whom the great historian called the Red Sphinx. (103-4)

Two weeks ago, as I'm waking up from anesthesia after surgery, I find myself babbling on about the Thirty Years War. To feed into whatever loopy mania I'm having at the time, the anesthesiologist says he is a history buff. We talked for a while...what about, I have no recollection. I vaguely remember mentioning that he might want to check out The Red Sphinx, which was most likely the proximate cause of my Thirty Years War fixation. Who knows? Certainly not me, although if so, it clearly stuck with me through other states of consciousness.

Alexandre Dumas began writing La Comte de Moret late in his career, failing to finish it before his death in 1870. It had been serialized in 1865-66, but the paper Dumas was writing it for went bankrupt. Since much of the book is about Cardinal Richelieu, over time it came to be known as The Red Sphinx. The bulk of the novel shows Cardinal Richelieu conducting the affairs of state and navigating the political intrigue of the French palace. Translator Lawrence Ellsworth appends to the unfinished end a novella originally published by Dumas as The Dove in 1850. Maybe it's not quite the perfect ending Ellsworth claims, but it does continue and provide a satisfactory ending to one of the storylines of The Red Sphinx.

The action picks up a few weeks after the end of The Three Musketeers, but throughout the book the musketeers are never mentioned, while Monsieur de Tréville garners one mention. Dumas begins by looking at the maneuverings and conspiracies regarding love and politics in the upper crust of French society. Along with eminent people, Dumas weaves in little-known historical figures, fitting them into the story to his advantage. The cast of characters, in appearance and reference, is substantial. Fortunately, Ellsworth includes a valuable guide to the more important characters in the story (fictional, historical, and in-between) as well as online supplementary notes and comments. In addition to narration, Dumas includes real and fictional historical documents such as memoirs, diaries, and histories of the period to lend an authoritative air to the novel.

After setting the stage through secondary characters, Dumas begins to focus on Cardinal Richelieu and his network of intelligence gathering. The Cardinal's dual goals center on retaining power while guiding France through a tumultuous period as it is led by a weak king. Because his enemies are just as ruthless as he is, Richelieu knows if something happens to Louis XIII he won't be alive at the end of that day. But Richelieu remains cool and analytical, usually staying several steps ahead of his foes. Dumas has added complexity and an appreciation of the Cardinal well beyond that of TTM. Dumas also delves quite a bit into Louis XIII and his weak, vacillating nature.

Even though the plot meanders, the various episodes consistently hang onto the general framework for most of the novel. Dumas shows Queen Anne and the Queen Mother Marie de Medici scheming with others in Europe to depose Louis in favor of his younger brother Gaston, duke of Orléans. At the same time Richelieu attempts to counter their moves, he also carries out an investigation of the assassination of Henri IV (Louis XIII's father). Despite the serious sounding nature, there is still plenty of humor consistent with that of TTM, whether through characters' comments or Dumas' pointed asides and aphorisms.

The last third of the novel proper focuses on the War of Mantuan Succession in Italy, a side show in The Thirty Years War. (Readers of Umberto Eco's The Island of the Day Before will recognize the siege of Casale.) The attention also begins to shift, away from the Cardinal and toward Comte de Moret, Louis XIII's illegitimate half-brother, his role in the war and his love for Isabelle de Lautrec. As mentioned earlier, Dumas didn't finish The Red Sphinx so Ellsworth adds the novella The Dove, composed of letters sent between Moret and Lautrec, as its ending. The Dove is flowery and sentimental, not at all from the same vein as The Red Sphinx, but it does draw part of the preceding novel to a close.

It isn't necessary to have read TTM to enjoy The Red Sphinx. It isn't Dumas at his sharpest—at times it feels like he's trying to wring more life from the successful franchise—but there are still plenty of good moments in with the clunky ones. I would hazard to say if you read TTM and enjoyed the second half of it (focusing on d'Artagnan's seduction of Milady de Winter and her revenge), then this will appeal to you. Recommended.

Links:
An introduction to the novel by the translator, Lawrence Ellsworth

Supplementary notes and comments by Ellsworth

An interview with Ellsworth, including a helpful breakdown on the many musketeer novels and why the titles can be confusing, plus details on his intention to translate all of them

Quotes from the book: 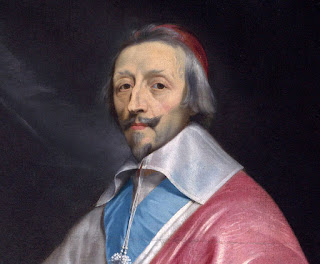 Portrait of Cardinal Richelieu by Philippe de Champaigne
(1640)
Picture source
Posted by Dwight at 7:02 AM

i started this but got distracted by "Life: A User's Manual", which i liked pretty well... must get back to "Sphinx", now... tx for the encouraging post...

While it is uneven, there are some really good scenes, such as a duel fought between men in sedans. Good luck!