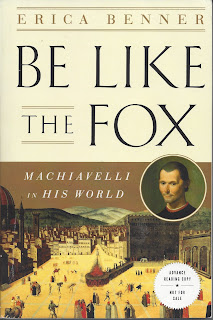 Be Like the Fox: Machiavelli in His World by Erica Benner
W. W. Norton & Company, 2017

Erica Brenner's study of "Machiavelli in his world" is being released today. I obtained an advance reading copy secondhand and wanted to pass on a few of my thoughts about the book since I found it helpful and enjoyable. I'll keep quotes from it to a bare minimum since these were uncorrected proofs.

Having your name end up as a common adjective seems to be a mixed bag. Sometimes it has a positive or at least neutral connotation, such as platonic, ritzy, or socratic. Many times though, such eponymous usage is not intended to be something nice, as in the cases of Sisyphean, chauvinistic, or draconian (actually existing is optional in some of these usages). In the case of "Machiavellian," it's rarely meant as a compliment since the intent is to describe someone as cunning and deceitful.

Much of Machiavelli's reputation stems from The Prince, his political treatise dedicated to Lorenzo di Piero de Medici (although initially intended for Lonrenzo's uncle, Giuliano). Instructing a Medici to be ruthless, tyrannical, and immoral may seem like asking a fish to be wet, so what is really going on here? And how can certain messages in The Prince be reconciled with Machiavelli's other writings supporting a republic and extolling positive virtues? Is it possible to reconcile contradictory passages in The Prince itself?

Benner addresses these questions of Machiavelli's apparent contradictions and ambiguities by reviewing his many works—"political and military writings, histories, personal letters, diplomatic dispatches, poems, and plays"—as well as writings of his contemporaries. What she ends up with is a splendid history bringing Florentine society to life, showing how the republic's political life impacted Machiavelli and influenced his writings. I'm not sure I completely buy into her explanations on some of Machiavelli's writings, but she provides a useful guide in listening to his own voice instead of his reputation.

Despite many scholarly books, papers, etc. showing Machiavelli isn't the demonic figure the adjective implies, the question remains on how to read The Prince. In his 1972 essay on "The Originality of Machiavelli" Isaiah Berlin noted there were "over a score of leading theories of how to interpret The Prince and the Discourses" and over three thousand items on a bibliography of the same. One can only imagine what the multiple of that number is up to today.

So is The Prince to be read in a straightforward manner, as if it's Machiavelli's job application for the Medicis? Or just the opposite, as if it were satire at the Medicis' expense? Benner chooses a different approach, arguing that The Prince should be read ironically, an approach close to what some of his defenders in the sixteenth and seventeenth centuries proposed (see Diderot, Bacon, Spinoza, and Rousseau for examples). She says she has found it helpful to place Machiavelli "squarely in his world" when trying to interpret his writings, which is what she presents in this book. Note the U.S. subtitle of Machiavelli in His World, which I think does a better job of summing up the book's achievement than the U.K. edition's subtitle of Machiavelli's Lifelong Quest for Freedom. Not that freedom isn't addressed...Benner notes that no one did more to advance the freedom of the Florentine republic...but my preference is with the former.

Machiavelli seems to have been on the outside of the Florentine "in crowd," even when he was serving important roles for the republic. His knowledge of classical history, especially of the Roman republic and empire, paints him as a man out of his time. Coursing through much of his writing is the influence and domination of Florence by outside forces, such as France, Spain, the Holy Roman Empire, and various popes as well as the undue influence of insiders like the Medicis or Savonarola. His disappointment in such influence and domination doesn't stop with those acts but also in how locals responded to them, many meekly accepting events while others tried to profit from them. Along the way of displaying Machiavelli's life and times are portraits of many larger-than-life characters he saw or dealt with: Giraloma Savonarola, Caterina Sforza, King Louis XII, Paolo and Vitellozzo Vitelli, Pope Alexander VI, and Pope Julius II. Machiavelli's biography places him in a fascinating place and time in history, where he becomes an actor in the many dramatic conspiracies and political intrigues of the day.

I'll skip much of Machiavelli's biography here in order to talk a little about Benner's approach. She notes that in her own repeated reading of Machiavelli's work she finds some of the more bombastic statements (especially in The Prince) are undercut by caveats and insinuations. Machiavelli admitted that he didn't always say what he believed, hiding the truth among many lies. But if we're supposed to read between the lines, how do we know when we get it right? Benner's approach is to look at all his other writings and find the consistent voice, even if it's in a lower or softer register. It seems there may be a further problem, though, in trusting that baseline too much, especially from someone that admits to writing lies. What are we supposed to do when we see some of the outrageous lines from The Prince echoed in other works? I'm not saying Benner is wrong, just that reading Machiavelli's intent seems even trickier to intuit given the many challenges she highlights.

Since there is so much source material available, Benner weaves in many quotes and abridgments in reconstructing Machiavelli's life, making the work more conversational. While some fictional embellishments are added with this approach in order to increase the dramatic effect, fortunately they seem to be kept to a minimum. My concern with the reliance on the quotes (and abridgments) lies in their chronological accuracy. In other words, can something Machiavelli wrote in The Prince or the Discourses or correspondence accurately reflect his intent or meaning in something he wrote a decade earlier? The worst case, I guess, is that we're reading what the older Machiavelli thinks of earlier events (assuming we're taking him at face value correctly or reading between the lines properly). Another potential drawback is that we don't get to see the development of his political thought over time.

"Take Nothing on Authority," "Build Dykes and Dams," "Be Like the Fox," and "Simulate Stupidity" are some of the chapter titles, using parts of Machiavelli's quotes to provide themes for the different stages of his life. Some like "Beware of Doctors" also provide an example of the undercurrent or two-register writing Benner alerts us to since medici means doctor. So what does "Be Like the Fox," the title of a chapter and the book, imply? While we often associate foxes with craftiness and deceit, Machiavelli defines this simile to highlight the fox's ability to avoid snares, something Machiavelli ultimately was unable to do.

Even with the caveats or questions above, I still recommend the book. Benner provides a great introduction to Machiavelli's life and times, assisting the reader to understand his influences and challenges during these tumultuous years. It's a complicated time period to try to explain, but Benner's conversational style helps in presenting the events. Machiavelli may be represented too much on the idealized side, swinging the pendulum away from demonization, but that makes reading his works all the more important in order to listen to his voice and make up your own mind. Highly recommended.

Regarding other features of the book (and noting again I don't have a final copy yet), the inclusion of a "Dramatis Personae" proved to be helpful, especially since several names are similar and I needed occasional reference to distinguish between family members. While not entirely necessary, I found myself wishing for a map or maps to show proximities of and directions between the republics and principalities. Assuming there isn't one in the finished book, Benner does a fine job of including helpful details to stand in for maps, plus there are some to choose from online such as this one.

Lastly, many thanks to Tyler Cowen for mentioning this book in one of his "What I’ve been reading" posts.

Link: The publisher's page for the book

Update:
An excerpt I enjoyed from the book, showing what a playful character Machiavelli could be (at least in this case)

Update (13 May 2017):
I just got a copy of the official release and it has two maps—one of Italy in the late 15th century and one of Florence. Both are well done and should prove very helpful for readers!
Posted by Dwight at 7:31 AM