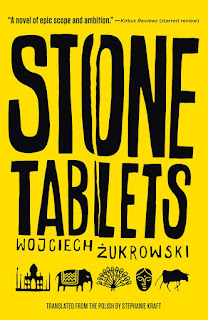 One may shake the Ten Commandments in helpless anger, but no one is exempt from them. They are always with us, etched on our consciences; they weigh every action, affixing their sign of approval or condemnation so as to crush us in the last hour and accuse us for eternity. (page 587)

Many thanks to Will Schofield at Paul Dry Books for sending me a review copy of this book earlier this year. I hate that it took so long to post on it, but that's been the fate of many things this year. I hope this serves as a partial offset for the delay.

Wojciech Żukrowski (1916 - 2000) was a new name for me, but his biography made me want to explore some of his work. Stone Tablets, published in 1966, was banned by the Polish authorities because of its comments on Stalinism. Set in India in 1956, Stone Tablets tells of a love affair between the Hungarian cultural attaché stationed in New Delhi and an Australian ophthalmologist. The diplomat, Istvan Terey, proves to be an unusual diplomat. He's not a particularly dedicated Communist party member, preferring to write poetry instead. While married and with two sons, his family remains in Budapest instead of joining him in India. Margit Ward, the Australian, works with Unesco to stop the prevalent spread of trachoma in the country. From a rich family, Margit throws herself into her work from the grief of losing her fiancé during World War II and from the guilt of her privileged status. We are introduced to her as looking for another cause, and she seems to view Istvan as just that. She wants Istvan to return with her to Australia so he can work on his poetry in a free country. For his part, Istvan seems torn between his concern for his family's safety and his desire to be free of them.

The affair between Istvan and Margit is central to the novel, and sadly it's the weakest part. Fortunately, other areas are extremely robust and well done. 1956 turned out to be a tumultuous political year. Nikita Khrushchev's speech denouncing Stalin and his protégés caused many ripples in the Communist world that year. The promise of change led to demonstrations in Poland and Hungary, where initial concessions emboldened further revolts. Istvan, thousands of miles away from home, is at the mercy of infrequent and incomplete information about events in Hungary. The brutal crackdowns in Poland and Hungary are swept away from the world's focus as the Suez Crisis begins.

While all these events unfold, Istvan searches for news from Hungary. He finds occasional updates through other diplomatic channels, but the most insightful comments come in letters from Bela, a reporter and close friend from Hungary. Through Bela, Istvan learns of the "fresh evidence of cruelty" from the past coming to light, where party members are "forced to feel the cruelty of the machine in which he had been one of the cogs," the changes in fortune for those once powerful in the Communist hierarchy. Istvan's boss refuses to change, believing that de-Stalinization had to proceed with caution since "if unleashed without restraint, may lead to internal upheaval." The party line is that moving too fast would favor Communism's enemies.

The political promise in Hungary of shaking off its past resonates with Istvan, who's unsure which direction he wants to go in his personal life. Like the upheaval back home, he realizes that it isn't possible to be passive and stay on the sidelines. He lacks the fortitude to commit to a decision in his personal life, though, choosing to continue acting as he has—in a sense, behaving just like his boss. His actions, or rather his inability to come to terms with what is happening around him, also mirrors some of the British he sees in independent India. Even though India is no longer one of their colonies, they feel more comfortable there than they do back home, where changes not to their liking are taking place.

The Hungarian embassy turns out to be a political cauldron. Istavan acts as if he is above the political dynamics there (he's a poet, after all), but like Hungarians realizing their country's insignificance in relation to others when other global events explode, Istvan comprehends too late he's just a small cog in the political machine.

The political discussions and events exhibited in the novel aren't its only strong point. Żukrowski's portrait of India, still feeling its way on the stage as an independent country, contributes a lustrous travelogue component to the novel. And it's a powerful portrait he paints. There's a political angle in these descriptions, where there is much talk about the potential that has yet to be realized. As some of the native characters realize, it was "easier to get rid of the English than to control" what was set in motion with their independence.

Żukrowski served in Poland's diplomatic service in India and it shows in his descriptions of everyday scenes. One of the characters describes India as a Breughal painting, and Żukrowski's portrait of India details a love of and appreciation for the lower classes similar to that of the painter's depiction of peasants. One example: there's a striking scene where Istvan finds himself in the middle of a demonstration made up of prostitutes and blind men (who play music in the brothels). These groups are protesting new rules relocating brothels outside the city, meaning a loss of their steady income. It's something so outlandish but presented in such a sympathetic light I have to think Żukrowski saw or read about a similar event. There are many such wonderful details and events shown in the novel as Istvan travels around India. Some of it is glamorized, but Żukrowski's love of the country shines through.

Even though the love affair central to the novel is the weakest component, the strength of the other parts, the political component and depiction of India in particular, made for a gratifying read. Recommended.

Additional links:
Stephanie Kraft discusses translating famous Polish novel into English: a fun five minutes on some of the difficulties on translating the novel

Paul Dry Books' reading guide to Stone Tablets. Contains a chronology of important dates around Żukrowski's life and the book, a character list (I found this handy), and chapter summaries (with spoilers).

Michael Orthofer has a more detailed review, including the insight below. It's one of the many parallels running through the novel that makes it enjoyable to read:

The lack of privacy Terey experiences is nicely presented, as he finds himself unable to keep even the locals who work for him from closely monitoring all his affairs, an amusing twist on the surveillance state he has otherwise been able to leave more or less behind... .