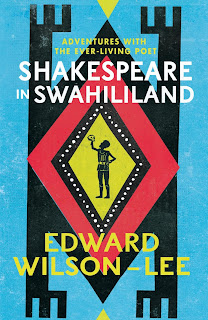 One of the most striking things I found as I followed Shakespeare on his travels through East African history was the fact that the works were present at every stage of life in the region during the very period when the region was struggling to free itself from colonial rule. The plays were set as compulsory reading at school, yes, but they were not dispensed with after that as nothing more than rote learning. Many—even most—of those who would go on to become post-independence political, social and cultural leaders went on to study English literature at Makerere University, where the emphasis was heavily on the reading and performance of Shakespeare's plays. And though this odd fact in itself was the result of a curious set of historical circumstances, these readers of Shakespeare did not simply shake off their reading after graduation as so much colonial propaganda. Instead, they too Shakespeare with them out into the world, and he was woven into every part of the fabric of African life, into the speeches of politicians and lawyers, but also into the folklore of rural villages. Shakespeare even followed in times of crisis, into riots and guerrilla warfare and into concentration camps. Yet any temptation to write this love of colonial masters even as they overthrew them, is quickly dispelled as the trail is followed: these are wholehearted commitments to reading Shakespeare, and ones as likely to Africanize his works as to preserve him as a pristine European fetish. (137-8; quotes are from the U.K. edition)

Edward Wilson-Lee, raised in Kenya, teaches Shakespeare at Sidney Sussex College in Cambridge. He ran across the fact that one of the first books printed in the Swahili language had to do with Shakespeare, "a slim volume of stories from Charles and Mary Lamb's Tales from Shakespeare, published ... on the island of Zanzibar in the 1860s." Traveling through the countries where Swahili was common (plus Ethiopia), Wilson-Lee found "a hidden history that brought both Shakespeare and the land I thought familiar into richer focus than I had ever known them." Shakespeare in Swahililand records his journey and what he unearthed in these southeastern African countries, part travelogue, part literary and theatrical development, combined with the region's history. Many colorful characters, political and theatrical, grace the pages.

Early explorers to Africa's Lakes Region made a point of noting they carried Shakespeare (and other weighty works) in their safari kitbag, not to share with the natives but rather to remain in touch with civilization. Wilson-Lee visits Zanzibar, where the volume of the Lamb's Shakespeare translation was published, only to find that most archived documents of the mission house are in various stages of disintegration. While the man responsible for the publication of the translation, Edward Steere, initially came to the area as a missionary, it seems clear that in publishing this volume, and in other of his reports, he wanted to establish a shared culture, too. Explorers and missionaries lifted Shakespeare's narratives in writing their reports and memoirs, showing how integral the poet was in their lives and, possibly, how they thought he captured aspects of civilization and savagery.

I enjoyed the tie-in between the history of a region and how it impacted the theater, such as the use of Indian workers to build the East Africa Railway, running from Mombasa at the coast to the interior lakes. The side-effect of this was a "vibrant culture of East African Shakespeare performance in the early years of the twentieth century." All play performances had to obtain a license from the colonial authorities at the East African Protectorate, and Wilson-Lee includes an appendix showing approval for eight approved plays in Mombasa that are either performances of or adaptations from Shakespeare during February and March 1915. Reports of these and other performances provide interesting detail, especially surrounding the changes to Shakespeare's plots. There was also music added, of which Wilson-Lee was able to find two gramophone recordings on shellac (crushed battle-shell). The changes to Shakespeare's texts, or maybe better described as liberties taken, demonstrate an interaction with the poet, highlighting his appeal to audiences throughout time, language, and place.

Wilson-Lee illustrates presence of Shakespeare at the stages of life in the region by showing how Shakespeare may have been present in colonial run schools, but more importantly he wasn't discarded with colonial propaganda on the countries' roads to independence. His language "was woven into every part of the fabric of African life, into the speeches of politicians and lawyers, but also into the folklore of rural villages." What the people of East Africa did was take Shakespeare's writing and make it their own. Or as Wilson-Lee puts it, "the Shakespeare made in Africa has come to replace the one that was taken there."

I think it a little dangerous to view what happened through the lens of Shakespeare, such as British explorers viewing natives through The Tempest, but Wilson-Lee makes it clear when he does something like this it's only speculation. The book is a marvelous guide to the life of Shakespeare's writings and performances in the eastern Africa region, a travelogue of the poet's influence in the area. Even though his writings are understood in differing ways, his works have been available to the residents of East Africa for a while, open to their interpretations, and made their own. East Africa has appropriated Shakespeare, just as Shakespeare did with other works. Very highly recommended.

The abrupt withdrawal of Shakespeare from the front lines of East African life [at the end of the Cold War, post-1989] gives a strong indication of the extent to which his place there was sustained by power struggles rather than by disinterested love of his works. This, like so many other aspects of the story I have been pursuing, makes clear how difficult it is even to ask questions about Shakespeare's universal appeal. The Victorians' idolization of Shakespeare meant that he would have a place at the foundations of language learning in their colonies, and would serve as a totemic standard of beauty for the peoples over whom they ruled. In this respect there was a certain inevitability to the central place that he would have in East African history—first as something kept from the natives, then a test through which they could prove their allegiance to their colonial masters, then as something they could take over and make their own, and finally as something to be cast off, as the final and most internalized form of colonial power. It is possible that something would have serve this role even had it not been Shakespeare's works. (220-1)

A more detailed (and much better) review by Ramnik Shah.

"The resulting book is bursting with stories about reading in unexpected places and how it changes what we read, but at its heart is always the question of whether there is anything that is beautiful and significant to everyone—whether, in a sense, in a world deserted by shared values, there is any voice that can speak to us all." 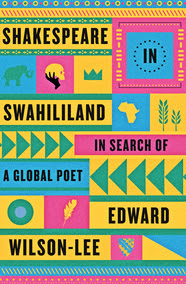 Shakespeare in Swahililand: In Search of a Global Poet
by Edward Wilson-Lee
Farrar, Straus and Giroux; New York: 2016
Posted by Dwight at 11:20 AM

i find this astounding! it makes me wonder whether we really know anything at all about history; there must be so many unknown or unconsidered threads contributing to what we think we know that we'll never be able to say we know anything at all! anyway, fascinating post, tx...

Thanks so much. I think it's more of a case of an area many of us don't know much about. The building of the East African railroad was completely new to me, but the ripple effect of it...of bringing in so many people from India, for example...is just as fascinating.