Romeo and Juliet by the Kenneth Branagh Theatre Company 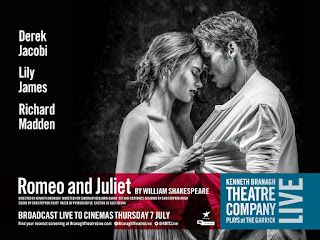 Last night I went to see the movie version of Romeo and Juliet presented by the Kenneth Branagh Theatre Company. It was a little eerie being one of only four people in a sizable movie theater watching this marvelous production, but I thoroughly enjoyed it.

Richard Madden was solid as Romeo, showing progress from self-absorbed youth to a lover and husband, but Lily James as Juliet stole the show for me, one of the most impressive performances in that role I've seen. Interestingly enough, she doesn't seem that ... ahem ... inexperienced at the start of the play, displaying a pronounced amorous side from the beginning. Casting Derek Jacobi as Mercutio might have seemed a little odd, but having an older, more experienced friend works extremely well since his advice and entreaties to Romeo seem more credible. This is a Mercutio that has been around the block, the city, and the state. The rest of the cast was solid. I'll only point out Meera Syal as the Nurse, who adds a frisky quality to the role, seeming to look forward to Juliet's amorous meetings as much or more than her charge.

The setting was moved to mid-20th century Italy. Given that the print was in high-contrast black and white, the play at times had the feel of a Fellini film. I loved the set design of towering columns, with fluid changes between scenes. My only complaint was that the sound was tinny at times, but since this has been a consistent complaint I've had with similar screenings, I guess I wasn't too disappointed.

I wanted to post on this production since Fathom Events sometimes provides encore screenings. If you get the chance to see it, I highly recommend it.

Sounds great. Only four of you?

Yep, only four of us. For what it's worth, it was in Salinas, California. None of the usual suspects were screening it in the San Jose area.

Last year the attendance at the Stratford Festival's screenings through Fathom Events was poorly attended as well, which is why (I'm sure) their screenings were scaled back and done through another company this year. Much to my chagrin...I really wanted to see Pericles (and more). I guess I'll have to wait for the DVDs from Stratford.

I highly recommend everyone check out Fathom Events for some of the remaining screenings they have this year. The highlight may be an encore performance of Hamlet with Benedict Cumberbatch, as well as some operas and ballets I'm anxious to see.