The Galdós Portrait in The Realists by C. P. Snow 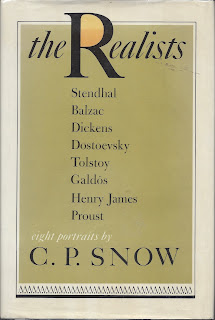 I stumbled across a copy of The Realists: Eight Portraits by C. P. Snow (Scribners, 1978) in our library and promptly checked it out when I saw Benito Pérez Galdós listed. I had no idea this existed, so I wanted to pass this on. I thoroughly enjoyed Snow’s essay and highly recommend it for readers wanting to know more about Galdós.

I quote from the Preface in order to credit the people that helped Snow in his portrait on Galdós. There were

two friends who have given me the most generous help about Galdós. I came to him, unlike all the others in the book, late in life. As soon as I read him, I had no doubt that he was one of the major realistic novelists. But I was very ignorant about him apart from the texts I was reading. Then I had the good fortune to get in touch with David Ley, now the London editor of the Revista de Occidente and for years the cultural attaché at the British embassy in Madrid. Through him I met Pedro Ortíz Armengol, at present minister-counsellor at the Spanish embassy in London, a devoted Galdós scholar who has remarkable knowledge, not only of Galdós’s work, but of the history and geography of Galdós’s life, including the streets he walked in nineteenth-century Madrid. Señor Ortíz is engaged himself in preparing a new edition of Fortunata y Jacinta and writing an introduction to that great work. Both of these friends have provided me with their own material, published and unpublished, answered and discussed matters of judgment. It was an unusual piece of luck to have come to know them, and I am more grateful than I can easily say.

If you are at all interested in Benito Pérez Galdós, whether you’ve read a little bit about him or even one of his books (or several, for the lucky ones), I highly recommend Snow’s portrait. It gives plenty of personal background on Galdós that I have not seen in English. What follows is a superficial summary of what Snow provides (and note that Snow mentions only two of Galdós’ novels were in print in English translation at the time…not much has changed on that front).

One of the most beneficial things that Snow covers is Galdós’ personal life. While growing up, the emphasis is on his unobtrusiveness while taking in everything that was going on around him. Anyone who has read Galdós will understand the…well, the understanding that the author provides. And also the irony and contradictions in his writing, which seems to have been present in his life from the start. His family provided both the desire for him to make a name for himself professionally, which for some (like his mother) didn’t include being an author, while others supported him emotionally and financially.

Galdós seemed happy to follow family advice to go off to Madrid, not because he would be studying law, since the faculty repeatedly reported that he had failed his courses because of insufficient attendance, but because he was in Madrid instead of Las Palmas in the Canary Islands. He earned a nickname from the tertulia group he hung out with: “While the other young men talked for hours about politics, religion, women, he sat unobtrusively making paper birds. … Galdós also made paper figures of celebrated Madrid prostitutes. In most student circles, that must have been even more popular. Some of them nicknamed him El chico de las putas.” By dubbing him “the child of whores,” his classmates seemed to have figured out at least part of what he had been doing instead of attending class. More on that proclivity later…

Then the family packed Galdós off to Paris, which is difficult to see how this would redirect his thoughts toward practicing law. It was this trip that Galdós probably immersed himself in Balzac and formulated what he wanted to do. And also highlights his peculiar devotions. It’s clear from his writings that he loves Spain, but he also thought that Spain needed a rebirth, which could only come from individuals. His novels show models of behavior he admires as well as behavior that didn’t. While seeming to be a very religious person, Galdós constantly lampooned the Church, pointing out that “in its medieval power and in blank ignorance, … kept Spain primitive.” (226)

Galdós’ first success were in his historical novels, which led to him becoming a best-selling author in Spain. Some of these novels were translated into other languages, but unfortunately few cared to read about a country waning in power and outside the mainstream. Once translated and ignored, it’s difficult to get a second chance.

His episodes of Spanish history make him successful in Spain, providing fame and money, but it’s at this point he began his greatest works. Snow spends a lot of time covering Las Desheradada (The Disinherited) and Fortunata y Jacinta, probably because those were the only two translations available in English at the time of Snow’s portrait. Snow highlights the historical events underlying these novels, royal abdications and restorations for example, that isn’t what makes the novels successful. It’s the detail Galdós spends with the characters, usually from the Spanish middle class and below. These are the people that Galdós knew from his time in Madrid through direct interaction or from exploring Madrid’s under-/other-side.

Galdós’ success in his novels for me (and notably for Snow) is the voice and understanding he gives to female characters. And then there’s the accusations of Galdós going over to Zola-type naturalism, which don’t interest me at all in the distinctions between realism and naturalism, but Snow provides what he describes as an alleviating difference Galdós provides that keeps him closer to realism: “There is always an interpreting and personal intelligence” (238).

Snow goes into much more detail about Galdós’ personal life and habits in Madrid than I’ve seen elsewhere, even highlighting some of the self-recriminations (and possibly admissions) he included in his novels. It’s clear Galdós knew the streets of Madrid, both upscale and otherwise, and his proclivity for afternoon trysts with women may have been a major reason for his financial difficulties. Some of the best portraits of characters in his novels are from the lower classes, and while it may be too much to say he had a comfort with the people on this level he was describing, I think it's not too much of a stretch to say that he understood them extremely well.

These assignations and hideouts of Galdós are detailed more than I’ve seen elsewhere, and I think they help explain the incredibly detailed and compassionate descriptions of such interiors in his novels. As friends of his used to say, Galdós had two passions: writing and women.

Snow continues with Galdós’ career as he turned his attention to plays and his difficulty with money. His poverty became a cause célèbre in Spain, with subscriptions raised and royal stipends granted. Worse, though, was the stroke he had in his mid-sixties and his failing eyesight. He had operations for the cataracts he had in both eyes, but they failed and he was effectively blind. The last seven years of his life he had no sight, and this was a man that “lived more through the eye. It was a dark and at times a Lear-like end.” (253) He was able to dictate plays and didn’t stop visiting the women, with help on both fronts—someone to take dictation for the former, and a manservant escort for the latter. Snow describes his funeral train, with possibly twenty thousand people following it, comparing it to the demonstrations of grief for Dostoevsky’s and Hugo’s deaths.

Snow’s portrait is no substitute for Galdós’ writing, but it does help explain some of what I've seen in his writings and what he was thinking when he wrote. Because it is much more detailed that anything else I’ve seen on Galdós’ literary and personal life that is available in English, I highly recommend it.