Head to head with Alexander the Great

I found an interesting article on an upcoming paper about Alexander the Great and the possible cause for his erratic behavior: CTE (chronic traumatic encephalopathy), the same problem many American football players experience after multiple concussions. A quote from the article on Alexandra Morris' goal:

“I believe Alexander deserves better than to be thought of as an out-of-control drunk,” Morris said. “A lot of warriors probably had this type of injury. At present, I am probably the only person in the world working on this thesis. Everyone thinks Alexander was an able-bodied warrior, but he wasn’t.”

I hope this gets reviewed seriously. Obviously we're trying to piece together something long ago with limited resources, but it seems plausible. OK, and exacerbated by the "out-of-control drunk" thing.

For examples of CTE effects, my first thought was watching the November 1984 Chicago Bears/Oakland Raiders game, where player after player was carted off the field, only to return later (usually briefly) in the game. It was brutal, and the turning point for my love of football after seeing the damage done to these players. A couple of years ago, an article about a childhood hero of mine, Terry Beasley, cemented that aversion. I'm anxious to see how Alexandra Morris' paper and follow-up research develops.

Note: I had forgotten I had mentioned the Bears/Raiders game in an earlier post. Here's the previous post on capturing the sounds of autumn.

Update (25 Jul 2016): I just read an update on the health challenges that the other half of the picture, Pat Sullivan, has been going through.

Update (1 Dec 2019): It's always sad to hear when one of your childhood heroes passes away. Pat Sullivan died today, and it's remarkable to hear the positive impact he had on others. It's great to hear that someone you idolized when you're young turns out to be a genuinely good person. 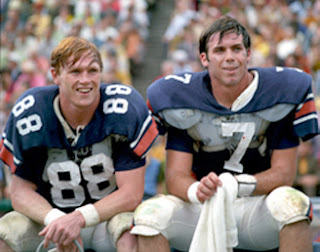 Terry Beasley and Pat Sullivan
Posted by Dwight at 12:16 PM