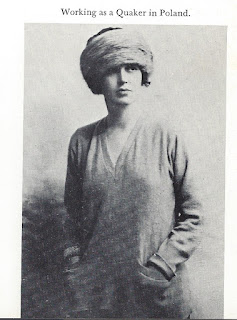 ...and bid them that they shall make them fringes in the borders of their garments throughout their generations, and that they put upon the fringe of the borders a ribband of blue: and it shall be unto you for a fringe, that ye may look upon it, and remember all the commandments of the Lord, and do unto them.
Numbers 15

The second section of Joice Nankivell Loch's autobiography opens with her determination to travel from her home in Australia to Europe. At this point in her life, she has published some of her writing and wrote a regular column for a newspaper but she wanted to be a more serious writer. She recounts her dangerous voyage to England in 1918: armistice had been declared but ships were still being fired upon. Joice had known Sydney Loch while they were in Australia and she had reviewed a book of his on the Gallipoli campaign. They married in 1919 and move to Dublin as freelance writers during what she called "the final eighteen months of the Sinn Fein war." While in Ireland the couple moved in colorful circles, especially the artistic group around George Russell (AE). In response to concerns of family members about her safety while writing about the fighting, she comments, "[I]n those days newspapers were not ruled so much by political gangsters as now, and journalists occasionally aimed at accuracy."

Despite the "period of madness" she describes, it's clear she loved Ireland, probably even more so because of the eccentricities and quirks of the people she portrays. With the peace, though, Joice notes how everything fell apart as everyone quickly turned on each other. She and her husband decide to go to Russia, so they contact Quakers who ran relief organizations there and in parts of Europe. They are assigned to go to Poland instead and Joice promptly falls in love with it. "I lost my heart to Poland. It was breathtaking in its summer dress, and equally so sheeted with winter snow." (69) Her love of nature, developed in the Australian bush, shines through in her descriptions of the country.

The history of the eastern part of the country, where they were assigned, reads like a horror story. Before, during, and after World War I saw massive population migration, uprooting millions of people. Three to four million people were displaced, many dying in transit to a new home, but the end of the fighting offered no relief:

After the war came the Russian famine, and those who had fled from the easter provinces of Poland began to stream back again to the forests, trenches, and barbed-wire where their homes had been. Again they died as the travelled, of hunger, typhus, and cholera. Those who arrived crawled into underground trenches, dug themselves holes in the ground, and mad bough shelters. ... Eastern Poland was a vast soldiers' grave. I have seen tall forests of silver-birch saplings growing in goodly thickets through the heaped skeletons of Russian soldiers. Hills were covered with skeletons laid one over the other in the manner of their falling, and one could not imagine any left to attend to those idea. Their arms were stretched in front of them, their skulls shot through. They were piled before barbed wire, or heaped on the brink of trenches; or the hundred ways of the Stochod [River] were blocked with them. Boots still clasped their legs, but for the most part the bones were picked clean. (70, 74)

Joice and Sydney work with the Quakers in medical and reconstruction units along the eastern border of the country. Despite the difficulties and dangers, her love of the people and the country shines through in numerous vignettes, whether she's describing how a famous school trained bears to dance or how peasants dealt with sickness and scarcity. The couple took advantage of an opportunity to go to Russia for a few weeks and observe life in Moscow after the revolution, a strange mix of beauty and brutality. They are able to visit a Tolstoy museum and a Tolstoy Colony, each run by daughters of the writer. Even though there was much to enjoy, at least as observers, Joice began to sour on the country. Or at least what she was hearing while there. "[I]t was not the bloodletting and cruelty, the slavery and starvation, that disillusioned us. It was the awful boring platitudes. Nothing new; not one original note. It amazed us to find how much of a pattern all political upheavals are." (89)

They return to Poland, finding beauty in the harshest of places and elements. It was at a party held for the French General Foch that Joice explains where the title of the book originated. She was wearing a black silk taffeta dress with a blue-bordered fringe when a Polish general quoted from the Book of Numbers (above), saying it was an omen that she would serve others all her life. In 1922, with the work of the Mission in Poland winding down, Joice and Sydney attend a meeting detailing the mass movement of people that was about to take place between Greece and Turkey under the direction of the League of Nations. Carl Heath, from the London Committee of European Relief, tells the crowd, "Any of you who do feel a 'concern'...will be preparing to help in the next world war," prophetic words to a shocked gathering who hoped that the war to end all wars had just ended. The chapter closes with the couple deciding to go to Greece.

Aside: Since the book is out of print, I picked up a used copy that had been a gift from Aletheia Pattison to one of her family members. Her obituary was pasted on the inside cover (shown below). It was in this chapter that Joice describes meeting Pattison (spelling her name Alethia) "along the Russian frontier." Despite lavishing praise on Pattison and saying, "She was always most generous in giving help where her interest was roused, and is one of the few friends left with whom I have had constant contact down through the years," there must have been something in Joice's account of their meeting that rubbed Pattison the wrong way. Most of one sentence is inked over and remarks are scribbled in the margin. It's just one of the fun finds from used books.

Thanks. I really need to finish posting about this wonderful book!