I reviewed Tristana by Benito Pérez Galdós about two years ago. The version of the booked I posted on was Tristana: Buñuel’s Film and Galdós’ Novel: A Case Study in the Relation Between Literature and Film by Colin Partridge (New York: The Edwin Mellen Press, 1995). My summary post links to the following posts related to the novel:
Far from the desired feminist manifesto
Don Lepe
Tristana
Horacio
A Fortunata and Jacinta quote that fits in nicely with Tristana

I'll be posting on the recent NYRB edition, translated by Margaret Jull Costa. The main reason of this post, though is to mention that Luis Buñuel's 1970 movie adapted from the novel is available for instant viewing until February 1, 2015. My notes on the movie adaptation can be found here. You've been notified—watch it early and often. While making some major changes from the novel, the movie is exceptional. As I've mentioned several times, Buñuel and Galdós make a perfect pairing. 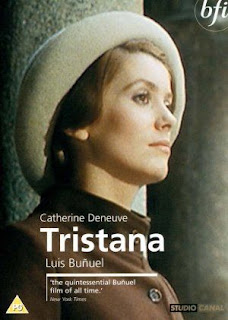 Dwight - I'm very much looking forward to your post(s) on the new translation (which I read in November). Thanks for the heads-up regarding the film.