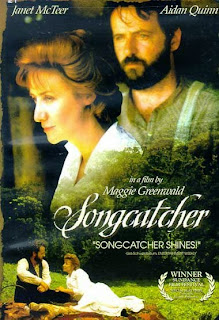 I usually enjoy the Coen brothers' movies, I really do. And as much as I love O Brother, Where Art Thou? I find myself not watching it when I have the chance in order to avoid a certain feeling of fatigue. It had been a while since I had seen Songcatcher...actually last viewed upon it's release...and I wanted to revisit it. (Like too many other movies, I can say I contributed 0.001% or more of its gross upon its release.) The movie is erratic, extremely moving one minute and melodramatic the next, but the performances are a joy.

The storyline provides both strengths and weaknesses to the film. About a decade into the 20th century, music professor Dr. Lily Penleric is denied a promotion at the college where she works even though she has done much more than her colleagues. She leaves the college in order to visit her sister, a teacher in the Appalachian mountains of western North Carolina. Lily discovers that the local residents have preserved many Scots-Irish ballads, most of them identical to their origins centuries earlier. Seeking to document and collect as many songs as possible, Lily transcribes them to sheet music and records several on phonograph cylinders. The story from there takes a turn to the soap opera-ish, usually based on stereotypes of the mountain folk and the imposition of progress in the backwoods.

One of the strengths of movie centers on how different the view of music is between Lily and the mountain people. To her it's something to document and write about. The "savage mountaineers" view music as an important part of life, something to perform and savor. To them it's to be experienced, not a specialty to be analyzed in a sterile institution. Not recognizing the importance of her presence, Lily is so wrapped up in her work that she is blind to the impacts her single-minded pursuit causes.

To the film's credit, it makes fun of the same stereotypes it sometimes falls back on. Even then, though, the effort can feel contrived at times. There are several characters who are trapped between their roots and having visited or being part of "the other world"—anything outside the mountain community. David Patrick Kelly does a nice turn with his portrayal of Earl Giddens, a coal company representative. He tries to convince locals to sell their property to the company, for a fraction of its real worth, of course. Showing up at a dance, drunk and belligerent, he gets knocked out in a fight. Awakening and starting to leave, he tries to show he's still part of the community by launching into "Conversation with Death," a nice twist but as I mentioned, a little clumsy and contrived. He helps demonstrate the traditions of the mountains have been kept alive because of their isolation. And as the central figure, Janet McTeer does well as Dr. Lily Penleric, although her doe-eyed responses wore on me after a while. Add to that an ending where Lily descends to a level of exploitation that Tom was fighting against the whole movie (but now helps) and you have a slightly confused movie.

The supporting cast helps me in recommending the movie, even with the concerns mentioned above. Jane Adams is fabulous as Lily's sister Elna, who recognizes the limitations of her role and her sex but works to make a difference within the given system. Emmy Rossum, in her first big-screen role, captivates as Deladis despite the awful (at times) accent she affects. Aidan Quinn portrays Tom, a Spanish-American War veteran displaying the difficulty of a mountaineer who has been to "the other world" and returned. Concerned that locals will be exploited, he vigorously defends their rights to live and let live, without (always) resorting to violence like some of them do. And the musical performances...whether by Emmy Rossum, Taj Mahal, Iris DeMint, or many others...are lovely. They provide the heart of the movie around which the framework, solid or contrived, hangs.

At one point Tom chides Lily "We have very different notions of what enjoyment is." That's apparent in the performances, too, marked by the difference of the mountain folk performing for themselves (with apparent joy) versus performing for Lily (starting as fun, but quickly descending to work). I'll watch the movie again because of the music and the sheer joy I can feel in those performing it.