Stonewall Jackson: An iron sabre vowed to an iron Lord 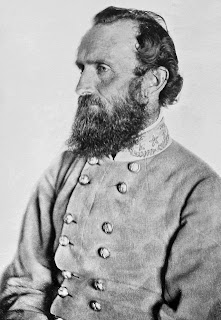 
Stonewall Jackson, wrapped in his beard and his silence,
Cromwell-eyed and ready with Cromwell's short
Bleak remedy for doubters and fools and enemies,
Hard on his followers, harder on his foes,
An iron sabre vowed to an iron Lord,
And yet the only man of those men who pass
With a strange, secretive grain of harsh poetry
Hidden so deep in the stony sides of his heart
That it shines by flashes only and then is gone.
It glitters in his last words.

I wanted to do a separate post on a few of the appearances by Stonewall Jackson in other literary works. The first I wanted to point out, as noted above, is from Stephen Vincent Benét's book-length poem John Brown's Body. Benét goes to great lengths in his opening note to say that he is writing a poem, not a history, and fiction will be intertwined with actual facts. With events and people I was familiar with through my readings, I was surprised how well Benét captures the essential element. His line on Jackson, "An iron sabre vowed to an iron Lord," perfectly captures in a few words a sizable part of the portrait as presented in S. C. Gwynne's Rebel Yell: The Violence, Passion, and Redemption of Stonewall Jackson. Other parts of the poem fill in the gaps of the 'portrait' very well. I don't want this to turn into a review of Benét's poem, but I do want to say I recommend it. The poetry is clunky at times, the effects he tries with meter can be painful to watch at times, and the length can test you. But overall Benét humanizes the war extremely well, using multiple perspectives from individuals who truly come to life. What I like best is that Benét rarely went for simple answers—people are flawed, so their actions and their creations (including nations) will be, too. The images he creates can be heart-rending, especially in their tragic beauty. The poem can be found at Project Gutenberg of Australia (depending on your country's copyright laws).

On a side note, Jackson was a professor at Virginia Military Institute and part of the group charged with providing security at John Brown's execution. Two pages with more on Jackson's account of Brown's death:
- from the VMI archives, and
- at Civil War Saga (also see their post on one of Jackson's strange habits, which provides detail on the separate burial of his left arm).

Dead is the Man whose Cause is dead,
Vainly he died and set his seal—
Stonewall!

A tear on Jackson's bier, is allowed (it seems) but not a wreath. Echoing the vain war theme, but much more sympathetic of Jackson's self-imposed duty (or following "his star"), comes from an anonymous Virginian in a poem following Melville's on this page.

I'll close with one of the more famous poems about Jackson, written by John Greenleaf Whittier. "Barbara Frietchie" was published in 1864 and quickly became a sensation. Whittier describes the real-life Barbara Frietchie as having retrieved her American flag from the Confederate troops (on their way to Harpers Ferry in 1862). Catching the flag after rebel troops have shot it down, she yells at Jackson and causes him shame:

"Shoot, if you must, this old gray head,
But spare your country's flag," she said.

A shade of sadness, a blush of shame,
Over the face of the leader came;

The nobler nature within him stirred
To life at that woman's deed and word.

"Who touches a hair of yon gray head
Dies like a dog! March on!" he said.

All day long through Frederick street
Sounded the tread of marching feet.

All day long that free flag tost
Over the heads of the rebel host.

Ever its torn folds rose and fell
On the loyal winds that loved it well;

And through the hill-gaps sunset light
Shone over it with a warm good-night.


Despite acknowledging the incident couldn't have happened as he paints it, Whittier relies on a "fake but accurate" excuse for his work. Regardless of the veracity or conflation of events, "Barbara Frietchie" was a tremendous hit (the poem can be found here). As S. C. Gwynne puts it in his biography,

None of this ever happened. But to the Northern nation—the wartime nation—the incident was as good as documented fact. What it said to them was that Jackson was a gentleman and a Christian and a decent person in spite of his role in killing and maiming tens of thousands of their young men. But it also said that he was, fundamentally, an American. It was his Americanness that had "stirred" in him and redeemed him.

Jackson had that effect on the Union troops and public. Gwynne recounts several times that Union POWs cheered Jackson as he passed. For someone so reserved and taciturn, Jackson's popularity was a surprise as well as a burden to him. More on these aspects of Jackson's life when I actually get to a review of Gwynne's book...