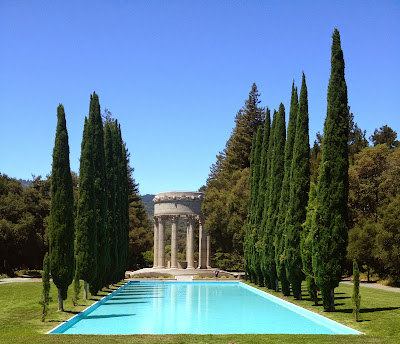 Located in Woodside, California, the Pulgas Water Temple commemorates the completion of the Hetch Hetchy Aqueduct (more on that below). The original temple, erected in 1934, was replaced four years later with the current structure of fluted columns supporting a ring inscribed with words from Isaiah 43:20: "I give waters in the wilderness and rivers in the desert, to give drink to my people." There is another plaque near the base with the same inscription. 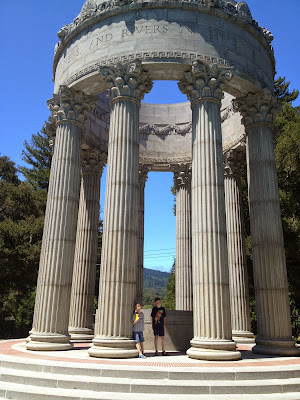 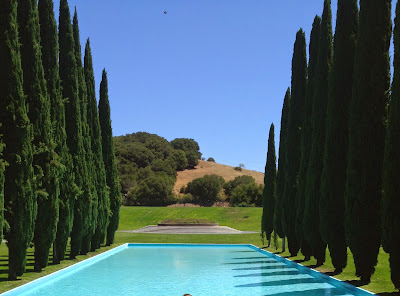 Looking east from the main structure
Photo by Dwight Green

Water no longer flows into the water temple. The aqueduct now ends at a treatment plant a few hundred yards south of the temple. Before the redirection, over two billion gallons of water from the Sierras would flow into a tile basin underneath the temple, then emptied into nearby Upper Crystal Springs Reservoir. 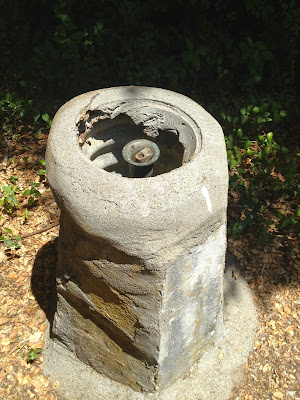 A sad sight: a broken water fountain at the water temple
Photo by Dwight Green

While there is a parking lot near the water temple, it's only open on weekdays. On weekends you either have to bike or hike to the temple grounds. My first visit there was after a 4-mile Sunday hike. I emerged from the surrounding woods to hear a string quartet playing at the temple. I sat nearby and watched a baptism...sometimes you get lucky on your timing. It has affected the way I've always looked at the place ever since then. It's a beautiful, peaceful place to visit.

So let's back up a step...why the aqueduct? 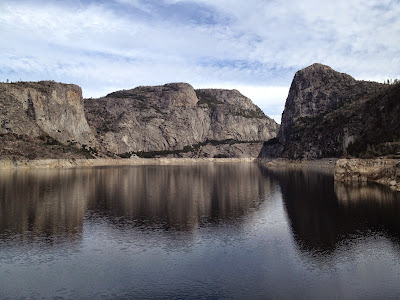 After the 1906 earthquake and fire, San Francisco officials began looking for more adequate water supplies. They applied to the U.S. Department of the Interior for development rights of the Tuolumne River in Hetch Hetchy Valley. An act of Congress was needed, though, since the valley lay in Yosemite National Park. John Muir vigorously fought that approval, believing the Hetch Hetchy Valley to be more beautiful than Yosemite Valley. Muir died the year after the Raker Act was passed in 1913, which allowed flooding of the valley and construction of a dam. (For more on the repeated violations of the Raker Act by the city and Pacific Gas & Electric see this chronology). 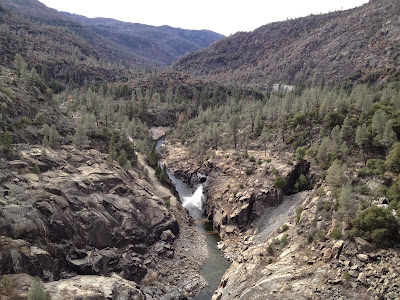 Water released below the dam
Photo by Dwight Green

The dam was finished in 1923 and the aqueduct system completed in 1934. Crystal Springs Reservoir, where the water from the valley used to flow, is closed to the public but several trails wind around parts of the two reservoirs.

Signs of the aqueduct system can be found all around the bay area. For example, if you've ever been to Great America in Santa Clara, you've walked right over one spur of the aqueduct (it crosses under the parking lot between Levi's stadium and the amusement park).


Sidenote: there's also a Sunol Water Temple located in the San Francisco Bay area, which may be the subject of a separate post.
I need to find a good book on the history of California water rights. What little I've read on it is fascinating. (See the post on California Water Wars for just some of the fun.)
The pictures of the Pulgas Water Temple were taken in July 2013. The pictures around Hetch Hetchy Reservoir were taken in January 2014.

Update (29 Dec 2018): Smarthistory has a short video on Albert Bierstadt's painting Hetch Hetchy Valley, California and a little bit on the history of the valley that is now underwater.
Posted by Dwight at 9:26 AM

I did not know of the Pulgas Water Temple, but will put it on the list of local wonders to visit.

Hetch Hetchy is magnificent, but one can scarcely imagine how much more magnificent it would have been prior to the dam. Still, I like seeing "Hetch Hetchy water" proudly printed on many San Francisco restaurant menus.

Pick a warm, sunny day and pack a lunch (and of course bring a book). During the week there's usually few visitors, and you may have the place to yourself. The last time I visited there were 5 other people there (4 were foreign tourists) over a 45-minute stop.

If I remember correctly, the parking lot says 30-minute limit, but I've never had any problems running a little over.

I will do it, thanks!