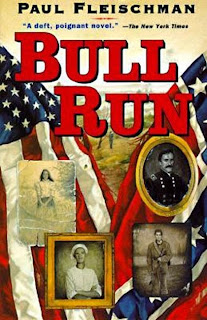 I'm in the process of finishing Bull Run by Paul Fleischman with my oldest son and we both really enjoyed it. The book covers the first major battle of the U.S. Civil War (and leading up to it) from sixteen different voices. Northern and Southern, male and female, black and white, young and old characters are included. I thought Fleischman did a great job of including many different topics that we were able to delve into on our own, such as

There's more we'll cover, but this gives you an idea of the rich topics covered or touched on in the book. To help keep the many characters straight, we colored in a map of the U.S. for the Union and Confederate states (noting the Border States differently) and writing in each character's name in the state they were from with a one- or two-word description of them ("slave," "horse lover," "photographer," "cab driver," etc.). This probably helped me more than my son, who had no problem keeping up with the characters.

I don't see an age recommendation for the book but this was included in a curriculum that is geared for 10 to 12 year-old students, which seems about right. Obviously some of the topics are going to be sensitive and need to be addressed according to age, but this was an excellent introduction to the war in general and to the battle in detail. Having just read an account of the battle in a different source (a review forthcoming soon, I hope), I was impressed with how much Fleischman included in this slim novel.

The amount of accessible literature on the Civil War is astonishing. Someone 10 to 12 may be a little young for such primary sources as Grant's or Sherman's memoirs, but Bruce Catton and James McPherson probably are manageable. I learned to read along about the centennial of Bull Run, so reading about the Civil War seems to me just one of those things one does.

I was surprised how much this slim novel gave us to talk about the war. I've got those memoirs sitting on the shelf for whenever he's ready for them, as some of the other novels/series. I don't want to overwhelm him and will let him go at his own pace, though. We are discussing "Rebel Yell: The Violence, Passion, and Redemption of Stonewall Jackson" by S. C. Gwynne as I read through it and he seems genuinely interested. (That's the book I hope to post on soon.)