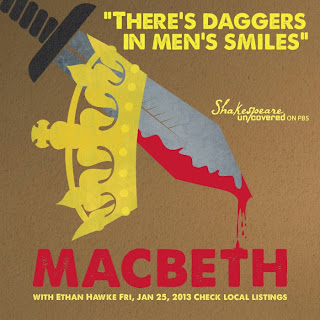 In a unique series of six films, Shakespeare Uncovered combines history, biography, iconic performances, new analysis, and the personal passions of its celebrated hosts — Ethan Hawke, Jeremy Irons, Derek Jacobi, Trevor Nunn, Joely Richardson, and David Tennant — to tell the stories behind the stories of Shakespeare’s greatest plays. Produced by Blakeway Productions, 116 Films and THIRTEEN in association with Shakespeare’s Globe, each episode explores and reveals the extraordinary world and works of William Shakespeare and the still-potent impact they have today. The films combine interviews with actors, directors and scholars, along with visits to key locations, clips from some of the most celebrated film and television adaptations, and illustrative excerpts from the plays staged specially for the series at Shakespeare’s Globe in London.
(From the PBS "About" page)

The series is currently available at PBS.org and for instant viewing on Netflix.

I watched the first episode of Shakespeare Uncovered and quite enjoyed it. Ethan Hawke explores the play with an eye toward understanding the title role in order to play the part. He begins by watching various versions to see how others have played the role. Hawke watches a 1958 interview with Orson Welles talk about his experience with the play: “It isn’t often one gets a chance to do these plays. I’ve done this one. Through my long career, I’ve played it on both sides of the Atlantic, I’ve done a textbook on it. I don’t know what I haven’t done about this play except do it as well as I’d like to. It’s a great feeling to be dealing with material which is better than yourself, that you know that you can never live up to.” Hawke lightheartedly comments, “It’s weird to see such ego and such humility at the same time.”

A lot of this episode is spent evaluating the weird sisters’ trigger of Macbeth’s ambition and how much of the eventual darkness was present at their initial greeting to him. There are many other topics, including the political implications of writing about witchcraft at the time, differences with the historical figure, and Lady Macbeth’s role as a partner in crime.

Hawke walks through the dagger scene (before the murder of King Duncan) with actor Richard Easton. I find it interesting to hear actors who have played Macbeth walk through scenes and relate what they did to prepare or what they thought during the scene. There were two extremely moving sections of the episode for me. The first was an excerpt from Sleep No More, an adaptation of parts of Macbeth using dance, movement, and mime to tell the story. Staging and body language powerfully conveyed the short piece they showed. The second moving section was when Hawke gets to handle and read from a First Folio at New York’s Morgan Library. His excitement about and reverence for the book is palpable.

All of my quibbles with some points raised in this episode are minor, such as my understanding that Macbeth’s “heat-oppressed brain” (and other mentions of fever) go beyond the literal fever or feverish imagination and were meant to provide then-current medical clues to demonstrate Macbeth’s state of mind as frenzy instead of madness.

Many of Hawke’s points can seem painfully obvious but it doesn’t hurt to say them. As he points out to close this episode, the power of the play comes from not holding Macbeth at arm’s length—what is inside him might be inside us. Reviews of Hawke as Macbeth called his performance underwhelming but as I mentioned above I found his exploration of the play very enjoyable. I’m looking forward to watching other episodes of this series and may post on a few of them.

Didn't know that - about the heat-oppressed brain. Thanks for posting.

Just saw there is more detail on this in the current Shakespeare online course I'm taking. Professor Jonathan Bate mentions a work by Andrew Boorde published in the 1550s: "The Breviary of Health." In it he has the following quote:

‘In English, it is named madness or woodness, like a wild beast. It doth differ from a frenzy, for a
frenzy is with a fever and so is not mania, this madness I do pretend to speak now of.’

The book was frequently reprinted in Shakespeare's time so it wasn't just an obscure reference.

Almost forgot this…see this post for more on the non-fever aspect of madness while looking at melancholy in Hamlet (courtesy of Robert Burton).

Thank you. Would be interested know what David Tennant has to say about it all.

Yes, I'm looking forward to that episode since I liked Tennant's version of Hamlet quite a bit.

The Henry IV and V with Jeremy Irons was pretty good--I really enjoyed him as H IV in "The Hollow Crown" series recently.