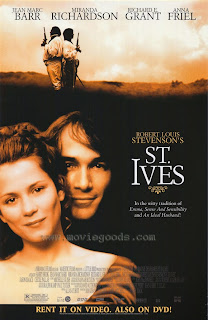 I stumbled across this film on Netflix's instant viewing and decided to watch it since I was familiar with Robert Louis Stevenson's book, although it's been quite a while since I've read it. I not sure why I wasn't expecting much, especially since I thought it would be a solid cast, but I think I enjoyed the movie more than the book on which it's based. The original UK broadcast title was All for Love. The movie's plot: Jacques de Keroual de Saint-Yves (Jean-Marc Barr) fights as a captain in Napoleon's army and, given his reputation in love, duels against many fellow soldiers. After being demoted to an infantry private he is captured by the British and sent to a POW camp in Scotland. The camp's commanding officer, Major Farquhar Chevening (Richard E. Grant), asks Jacques to help him learn the art of wooing Flora (Anna Friel), who lives with her worldly aunt (Miranda Richardson). Jacques and Flora become smitten with each other while the aunt lusts after the major. It turns out Jacques' grandfather fled France at the start of the Revolution and has an estate not too far from the castle used as the POW camp. Jacques escapes from the camp, making his way to his grandfather's estate and finds his brother Alain. Jacques thought his brother had been murdered during the Revolution. Alain, angry and violent, harbors a corrosive secret and tries to murder Jacques. The remainder of the movie follows improbable twists and turns on its way to a happy ending for the love rectangle.

Robert Louis Stevenson did not finish St. Ives: Being the Adventures of a French Prisoner in England before he died. Stevenson's stepdaughter knew the outline of the story and engaged Arthur Quiller-Couch to write the last chapters (if you're interested in the novel, find a copy that has all 41 chapters). It's a fun story, well told, that any reader that likes Stevenson will enjoy. The differences between the movie and the book are too numerous to list—let's just say the movie and the novel share a loose framework. The movie emphasizes swashbuckling aspects of the novel and adds a few of its own. It's as if writer Allan Cubitt and director Harry Hook used Richard Lester's version of The Three Musketeers as an inspiration and made changes to the story to fit that mold. It's a fun romp, even if some of the variations defy logic or possibility. The political overtones in Stevenson's story are mostly dropped, which makes the changes to Jacques' family and their situation feel forced and incomplete. The movie is only 90 minutes, which dictates how much is in and how much out of the story.

What the story and consistency lacks at times the four actors I've listed above more than make up for it. Richard E. Grant threatens to steal the show. Where the novel's major was perceptive, Grant perfectly portrays a soldier competent in the ways of warfare but clueless when it comes to other people (especially women). Overall I thought it a fun, well done romp. Enjoy!