Miklós Szentkuthy and the man beyond every variant of cultures 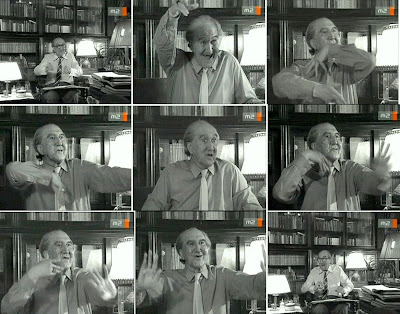 I’m not going to post much about István Vas’ article “Miklós Szentkuthy: a True Avant-Gardist”, although I do recommend reading it for his insight into the author and his work. I will draw attention to this extended quote since it highlights Szentkuthy’s own guide to the Orpheus books:

In 1942, after the first of these [Orpheus] “Notebooks” had appeared, Szentkuthy published a guide to the [five] parts that had appeared up till then. This editorial skeleton was produced with the same approach as twenty years later — this shows how Szentkuthy was a precursor even in such minutiae — as the handy guide to contents in the Pléiade edition of Proust to facilitate finding one’s way around the huge structure of In Search of Lost Time. The first page of the guide summarized the ultimate import of Orpheus so succinctly as to astonish us all, just as it would still astonish anyone who knows the author only from his works. This brief directory, in itself, is proof that the complexity of his style does not derive from simple inability to simplify, or as non-professionals often put it so appositely: he can write well, if he wants to. This summary, among other things, states the aims of Orpheus in the following way: “it seeks the man beyond every variant of cultures, all promise and failure of sciences and mythologies, the most distant periods and far-flung regions, the vast yet nevertheless finite shades of psychology. What remains of the masses of experience left behind? What can be utilized in the future? What is the play of time and what is the indispensable essence and possibly a permanent positive?” Then, even more clearly: “what should the new man be like, and what should he do?” That kind of reference to the future was not at all fashionable at that time, least of all among our generation, most of the best of whom, as a defense against the incursions of the horror of the present, became completely absorbed in the past, in memories, turning resolutely away from any thought of the future. If, therefore, Szentkuthy referred to the future, there could be no prescriptive “pointing to the future” either, just a serious intention to settle accounts with the past, and not with the filth of the recent past but the finest legends of human culture.

This “settling of accounts” only becomes evident, of course, if one can have some purview of the work’s structure. Perhaps the most fundamental point of László Németh’s acute, early analysis — against the charge of formlessness that was raised in most criticisms — is the sentence: “Nonetheless it is the structure that is most important in this work, not the structure that fits the details together, but the structure that sees the details; the perspective almost regardless of object…” Looked at from the standpoint of structure alone, the fictions and absurdities of the Orpheus Notebooks also serve this settling of accounts. It is quite natural that in this settling of accounts there should also be nostalgia for, even identification with, the role that is being played, or in other words, historical enchantment — for without that it would not be authentic or effective. Nietzsche was justifiably concerned about the historicism of recent times, but sympathetic cures are not without effect here either, and anyone who has imbibed as much history as Szentkuthy has, and furthermore is a strong enough personality, cannot be said to be a captive to, but is a grand master of historicism: history stands before him like a mighty organ, and he knows, as initiates do, how the surest harmonies come out of defending it.
(pages 45-46)

I would love to find that guide! Until then I’ll make do with what he wrote in his own words in Prae: Recollections of My Career, also in the Hyperion issue, translated by Tim Wilkinson. He calls it an abbreviated curriculum vitae but think of it as a blog post titled “Thirty-eight things about me.” There is lots to savor here, with several entries referred to and expanded on in the introductions to Marginalia on Casanova and Towards the One and Only Metaphor. A few notes and quotes follow:


There are plenty of stories and anecdotes about his work, but I will end this post by pulling two long paragraphs from §28. This section talks about his struggle to fund publication of the Orpheus books by subscription as well as providing his intentions behind the series. Could some of this be from the guide mentioned in Vas’ essay? Szentkuthy does mention he started these recollections in 1941, just before the guide was published, so there may be some borrowing or overlap. I include them because they should prove helpful to keep in mind when reading the series.

I started the prospectus for the first of the Orpheus Booklets with the following text:

The work, larger continuous installments of which will appear quarterly, comprises an interlocking Essay series. At the beginning of each chapter there will be a longer or shorter life of a saint, and, appended to that, historical essays, extracts from a novel, short stories, lyrical poems and aphorisms that are connected with aspects of the life and times of the saint who stands at the chapter head. The designation ‘Breviary’ in the title refers to this manner of composition. The name “Orpheus” expresses the underlying conceptual tone: Orpheus wandering in the underworld is an eternal symbol of the brain straying among the dark secrets of reality. The aim of the work is, firstly, to portray the reality of nature and history with ever more extreme precision, and secondly, to display through variations in the history of the European mind an observer’s every uncertainty, the fickleness of emotions, the tragic sterility of thoughts and philosophical systems. The reason for placing the epithet “Saint” before “Orpheus” is because the work seeks to portray both European history and the vegetative world of nature from an essentially religious, supernatural viewpoint. Although both the lives of the saints, as well as the other figures, famous books and cultural manifestations of history are, in point of fact, nothing more than different features of a lyrical self-portrait, the various roles and masks of the author as it were, the work is in essence “religious,” because from love to politics the emphasis throughout is on the battle of the body-politic of God and the body-politic of the world.

The goal of Orpheus: to find the human ideal and the most acceptable lifestyle that the reflective cerebrum and happiness-seeking sentiment could wish for after the widest-ranging historical, the most universal religious, and the most profound natural-scientific experiences. Its goal, therefore, is most unmistakably a humanist goal: to seek what is human beyond every variant of culture, every promise and failure of sciences and mythologies, beyond the remotest eras and most distant lands; psychology’s myriad and yet finite shades: what is left behind out of all these masses of experiences? What will be usable in future? What part is the play of time, and what the indispensable essence and possibly eternal positive?