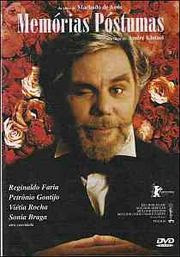 Director André Klotzel successfully keeps the playful nature of Machado de Assis’ novel The Posthumous Memoirs of Brás Cubas in this 2001 movie (IMDb.com page). The movie plays off the abundant irony in the book, touching on many of the same subjects. While it avoids the literary references that provide depth to the novel, Klotzel inserted scenes to smooth the narrative and add more humor, all of which proves successful. Human nature, good and bad (mostly bad), is presented with compassion and wit.

The story begins with Brás Cubas’ death and then turns to his life story. His education goes beyond school, including lessons on women, money, and love. Returning to Brazil when his mother dies he rekindles an interest in an old flame, now married. This plotline provides the central focus of the movie while including the insights and wit of the novel. Reginaldo Faria as the older (and dead) Brás Cubas interacts with the camera/audience as well as in the novel, providing sounds and tics that mimic the ellipses and dashes on the printed page. The disappointment and frustration of Brás Cubas’ death, just as he has discovered a potion that will provide fame and fortune, seemed to hit me even harder in the film than in the novel.

Parts of the book, faithfully reproduced, can provide a jarring effect such as the child Cubas riding one of the slaves like a horse. Other parts, such as the child Cubas embarrassing his teacher, create less sympathy than the novel. Which isn’t to say there is inconsistencies or problems—just that the difference in media can cause differing reactions. These differences can be used to great effect, such as when Cubas muses on the role of clothing to generate desire we get to see exactly what he means.

All of the actors did well, my favorites being Faria as the older Brás Cubas and Marcos Caruso as Quincas Borba. While I recommend the movie in general I highly recommend it for anyone that has read and enjoyed the book. I had some trouble finding a copy to view, but it was well worth the effort. All in all a lot of fun.

My comments on the book can be found in these posts. 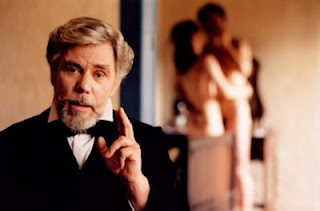 Reginaldo Faria as the older Brás Cubas
Posted by Dwight at 1:03 PM

Email ThisBlogThis!Share to TwitterShare to FacebookShare to Pinterest
Labels: Movies, The Posthumous Memoirs of Brás Cubas

I have not read Machado de Assis but I want to. It is always interesting comparing a worthy literary work to its film version. I am not one who thinks that all adaptations need to be faithful, that is just one way that a film can go. Sounds like this film did a descent job of replicating some of what was in the book.

I love comparing a good movie adaptation to the book, and this was a very good adaptation of both the novel's content and the spirit.

I'd phrase my outlook a little differently: I enjoy a movie that is faithful to the book but that doesn't mean it has to replicate everything exactly. Take advantage of the different medium...add...subtract as needed, but remain faithful to the spirit. As hopefully my comments on the many adaptations I've posted on shows.