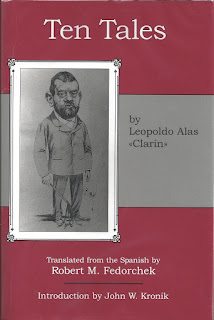 In this post I’m going to focus on the story “Doña Berta,” one of the richest and most perplexing short stories/novellas I’ve read. I commented on the other nine stories in this collection in this post. I’m hurrying to post this today because I think it makes a great Valentine’s Day story (just like “The Burial of the Sardine” is the perfect Ash Wednesday story).

I’m going to rely on John W. Kronik’s introduction on Alas to highlight the difficulty of this story (emphasis is mine):

Students of Alas, availing themselves of differing criteria, have made efforts to classify his body of stories. Such attempts have demonstrated, more than anything else, the broad range of themes that they treat, their multiple aims, the disparate techniques on which their confection relies, in sum, their rich variety of styles and content. These studies, as any reader of his stories quickly confirms, have also discerned common denominators among them, notably two main components: on the one hand, an acerbic sense of humor borne as a piercing critical weapon; on the other, a sensitivity, a consummate tenderness that elevates the lowliest of creatures to the highest emotional pitch.

What I found in “Doña Berta” was one or both of these components. While I’m not sure which of the two he intended I have my suspicions through Alas’ plot devices, so the usual notice of spoilers is in place here. A summary of the story: Doña Berta de Rondaliego lives with her four brothers in an estate in the Asturian countryside. The family remains withdrawn from society, valuing honor and “purity” over everything else. During the first Carlist War a captain from the Whites (followers of the queen regent Doña María Cristina) stumbles onto Posadorio (their estate). Even though the brothers are firmly on the Black (Carlist) side, they take pity on the captain and, while his body is mending, his company. Berta falls in love with him and …well, I’ll let Alas cover what they valued, how romanticism warped Berta’s mind, and what happens next:

All the brothers were confirmed bachelors; they were cold and apathetic, although kindhearted and courteous. Their idol was their untainted honor, their immaculate noble blood. The sanctuary of that purity was to have been in Berta, the sister, but Berta, even though like her brothers—fair-skinned, stout, gentle, and relaxed in her gestures, voice, and walk—had inside her tender qualities unknown to them. The second-oldest brother, somewhat of a man of letters, would bring home contemporary novels, translations from the French. They all read them. On the men they left no impression; on Berta they wreaked interior havoc. Romanticism, which for so many men and women in cities and town was merely a topic of conversation, at most a pretext for roués, in Posadorio had a veritable priestess, even though it arrived there as an echo of itself in ponderous newspaper serials. The brothers could never have suspected the existence of the flames of idealism and pure sentimentality under their roof in Posadorio. Not even after the misfortune did it occur to them that romanticism had caused it; they attributed it to chance, to opportunity, to treachery, which were also to blame. Perhaps the most evil-minded of the four [brothers] even ascribed it to lust, which was nonexistent in Berta, whereas nobody gave any thought to innocent love, to a heart that melts on making contact with the fire it adores. …

The captain had departed from Zaornín the day after he knew happiness in the garden; nothing was learned of the dishonor that he left there until, to the amazement and horror of the brothers, and to the amazement and lack of horror in Berta, the wretched young woman fell ill with a disorder that ended up in a mysterious, secret baptism that was treated like a disgrace.

The brothers entrust the infant to the care of a religious order, telling Berta that he had died. Feeling betrayed by their sister, the brothers leave the estate. Two die in the second Carlist War, the other two bankrupt themselves in supporting the losing side. Berta stays on the estate, insulated from the rest of the world until one day at 70 years old, she meets an artist tramping around the countryside. They feel a connection and the artist provides her with two new paintings of his: a copy of a portrait of the young Berta, capturing her better than the original, and the bust of the subject of his last painting. The subject, the painter’s friend killed in the second Carlist War, looks just like “her” Captain joined with herself—she believes the subject to be her son. She mortgages the estate and sets off to Madrid with only her cat to find and acquire the original painting. A rich Latin American tycoon has bought the painting and is about to ship it to his mansion in the new world, but he allows Berta to visit every day and look at the painting. On the day the painting is to be packed for shipment, Berta is hit and killed by a horse and streetcar. Her cat, caged because it could not conform to city life, dies forgotten in the attic of the boarding house.

This summary obviously doesn’t do the story justice. I would have expected to hear such a story in the Gentleman’s Club of Vetusta (yet another La Regenta reference). The excerpt gives a hint at Alas’ wonderful prose, the subtlety building over the course of the story until you realize you’ve been hooked by this haunting tale. The story follows a razor’s edge between satire and tenderness. Other characters laugh at this old deaf woman, sheltered all her life from an evolving society, but the narrator doesn’t. There is the obvious contrast between settings—the idyllic, verdant country, untrampled and undisturbed (except, of course, when it is), and the busy, dusty Madrid, with dangers of death or theft at every turn. But there’s plenty of irony housed in these settings. Berta is “disgraced” in the countryside. Even though the family helps with local charities, officials turn a blind eye (through “their slowness and apathy”) to thefts of estate property. The local notary fleeces Berta with “cold shears” in her business dealings with him. Offsetting the cold Madrid side, residents of Madrid turn out to be friendly toward the seemingly mad woman, helping her in the streets and providing contacts she had no rights to expect.

One of the most interesting details for me is Berta’s love of romantic stories. In Alas’ longer books, characters enjoying such fare are clearly inferior readers and people. In this case, it’s almost all she has—the estate library is limited to “religious tomes of withdrawn, secluded devotion and books of heraldry.” Her love of these stories doesn’t condemn her because that is all she has…she’s limited by her experience and capabilities. Mimicking this symbolism is her deafness—she can’t hear because of her old age while other characters refuse to hear or understand (through a choice she doesn’t have).

But getting back to the ambiguity of the story…
The bust that the artist gave to Berta provides certainty for her that the subject was her son. She mortgages her estate, knowing she will never see it again, basing everything on the bust. Once she sees the original work of the artist, though, she’s not so sure. She debates whether the subject might be her son until she surrenders certainty for faith: “In the end Doña Berta felt the sublime, austere joy of faith in doubt.”

In the end, though, she meets a similar fate to that of her son—a death in the fog of war/city that would be completely forgotten if it weren’t for art. The son’s last charge is perfectly captured by an artist. Doña Berta’s last moments (OK, and the son’s) by Alas. Both works capture a look, whether in the painting or in the story, of certain defeat as well as determination. In either setting, both carry through on the faith of their mission.

So we come to the ending, anticlimactic in several ways, but I don’t think Alas could have done it differently if he wanted to convey sympathy for Berta. In the end she loses everything—son, estate, painting, life. The denouement focusing on the fate of her cat adds to my certainty that Alas means Berta to be viewed sympathetically instead of critically.

It’s a beautiful story and I highly recommend finding a copy to read (it’s about 50 pages in this version). There are some issues, and if you’re of a practical nature you’ll note a few. But for anyone that has tried to tackle La Regenta and felt there were too many moving pieces and storylines, this is Alas telling a complex story with a tight focus. It’s a great introduction to his work.