Off the Beaten Track in the Classics by Carl Kaeppel: Pytheas and Massilia 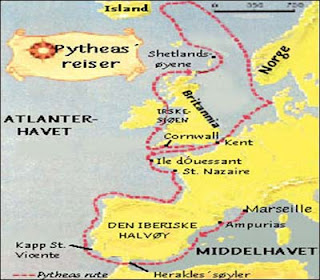 Pytheas' route
Picture source
Fridays with Off the Beaten Track in the Classics by Carl Kaeppel (Melbourne: Melbourne University Press, 1936) continues, although a little late...


Of the three great explorers of the ancient world Pytheas has had the worst fortune. Of none of them has the personal narrative survived, but the work of Hippalus and Hanno, although not permanent, had results that endured for centuries. Pytheas had no successors, his voyage was of no material benefit to the city he served so well, and he was even, some two hundred years after his death, denounced as an imposter, as a precursor of the Zenos or Frederick Cook. But in certain respects Pytheas is greater than either Hanno or Hippalus; he was not only an intrepid explorer but a scientist of more than considerable merit and achievement; ‘his journey was more fruitful in scientific discovery than any preceding the age of Henry of Portugal.’

Kaeppel begins with a quick glance through the history of Mediterranean travel, focusing on the western part. He also touches on Tartessos, which controlled Atlantic Ocean trade until around 500 BC. As long as the Tartessians were powerful, Phoenicians and others were mostly kept out of the Atlantic.

Kaeppel then looks at the history of Massilia (modern day Marseille). Some of what Kaeppel covers can be found in the prehistory and classical antiquity section of the city’s Wikipedia entry, including the story of Protis’ marriage to Gyptis (recorded by Justin but probably ultimately from Timaeus). Despite the continual change of power in the Mediterranean, Massilia flourished: “The real cause of Massiliot prosperity was the discovery and use of the gateway from the Mediterranean up the Rhone Valley into northerly Europe. … They swarmed into what is now French and German territory. The volume of trade was enormous.” The use of the knowledge is stressed since so often many discoveries lay dormant, not to be used or exploited for many years (see the introduction to this section as well as several of the preceding essays in Kaeppel’s book).

The Massiliot didn't publicize their experience but “one written record, corrupt, it is true, but of superlative value and interest, has survived.” The Ora Maritima attributed to Avienus provides “a more or less confused version of the guide book of a Massiliot trader—a guide book to both overland and sea trade.” Avienus mentions the voyage to Britain for tin as well as the exploits of Himilco, the first known Carthaginian to sail in the North Atlantic (and may have been an approximate contemporary of Hanno).

Pytheas of Massila’s date assigned by Kaeppel is in the window provided by his Wikipedia entry, but he focuses on the likelihood it would have happened while Carthage was engaged in fighting Syracuse from 310 to 306 BC. While Massiliots traded with Britain, their route had been through Gaul. Pytheas’ “primary object was to break up the Carthaginian monopoly of Atlantic trade, particularly in Cornish tin.” But that only partially explains his journey since he circled the island and explored many other areas. His practical application of astronomy was far ahead of others in his day.

Kaeppel labels Pytheas as unfortunate, not just because his work perished but also from attacks by later writers such as Polybius and Strabo “whose excerpts from Pytheas are as meagre as his own comments are bitter and skeptical.” Diodorus and Pliny end up being the more reliable sources of his journey. Kaeppel believes that, like Hanno, the details receiving the most question are proofs of Pytheas’ veracity.

A few points Kaeppel highlights in what has survived about Pytheas' journey:
Next week’s chapter has the wonderful title “Poison-Damsels and the Pseudo-Aristotle.”

Email ThisBlogThis!Share to TwitterShare to FacebookShare to Pinterest
Labels: Carl Kaeppel, Off the Beaten Track in the Classics, Pytheas