The title may be a little unfair—each of these books have been recommended by others, too. As it were, though, I came to each of these books based on his recommendations, either at A Commonplace Blog, during his stint at Commentary, or from his Twitter feed. I'm glad he recommended them and I'm happy to pass them along. Two have links to his reviews. 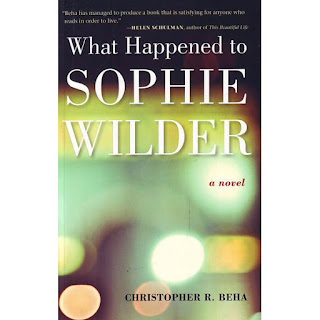 What Happened to Sophie Wilder by Christopher R. Beha
I avoid most recent releases in fiction because I find most of what I've read less than satisfying. Mr. Myers has been recommending this book for a while and I thought I would give it a try. I'm glad I did. I'll let his review in the above link speak for the book.

I'll just note that the title isn't a question and as the reader finds out more about what happened to Sophie Wilder the implications of everything preceding the revelations deepen and take on a sense of urgency. My favorite line of the novel fits in nicely with those revelations, as Charlie (the narrator) desires Sophie to abandon her idea of leaving:

“Do you really have to leave?”

“I wish things could be different.”

She leaned over the bed to kiss me.

“Then write it different.” 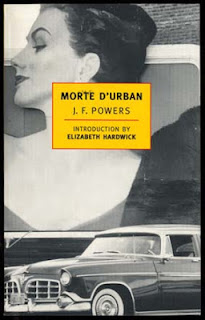 Morte D’Urban by J. F. Powers
Where has this novel been? Or rather, where have I been? I loved this novel and can't believe I waited so long to read it. There are plenty of problems with the church that Powers portrays, not the least of which includes the fact that priests and administrators are human. Or as Father Urban puts it as he remembers the life of Father Phil Smith:


Phil hadn’t been popular with laity or clergy. He represented a type of gentleman-priest no longer being produced in seminaries—now thoroughly Americanized and turning out policemen, disc jockeys, and an occasional desert father.

Or self-proclaimed marketing specialists in a stagnating order, putting their faith in a ministry by brochure. One storyline in the novel focuses on the wasting of Father Urban's talents, giving him a backwater assignment that he slowly improves despite not being in charge:


The Clementines, competitors [with other Catholic orders] not so much for the alms and stipends of the faithful as for their hearts, had got nowhere until Father Urban entered the lists. He, unlike Wilf, had taken good care to conquer the profane world before tackling the other one, and, for that reason, was able to deal with the clergy from a sitting, rather than a kneeling, position. They loved a winner. It was as simple as that. That was what was really behind the great change.

Unlike Arthur in the allusion to Thomas Malory's work, Father Urban does not literally die but does become a changed person through several adversities, including physical ailments (after perhaps the funniest and tensest golf scenes in a novel, although there aren't that many books in the running for that award). Highly recommended. 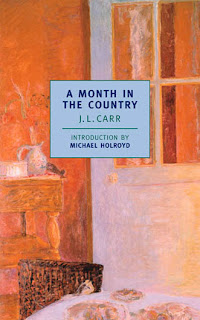 A Month in the Country by J. L. Carr
This recommendation came via Twitter around Veteran's Day and was seconded by several people. Tom Birkin, a veteran of the Great War, spends part of the summer of 1920 in the remote Yorkshire village of Oxgodby restoring a Medieval ceiling painting. While the war doesn't take much space in the novel, its effects are still keenly felt:

“What are your feelings about growing old, Birkin?”

It wasn’t an inconsequential question: I could tell that he really wanted an answer, a second opinion.

“I can’t imagine,” I said. “I mean I can’t imagine it happening to me,” I said. “It’s too far away now. Well, do you wonder? You know what it was like [in the trenches]. There can’t have been many of us who thought we’d need to worry about growing old.”

“Or what comes after that?” he said.

“Oh come on,” I said irritably. “We went in and we came out. That’s good enough for me. We’re here on borrowed time, and I’ll take what’s to come as it comes.”

Trying to piece together his own life while he slowly uncovers the mural, Birkin also tries to picture the artist who painted the masterpiece of five centuries earlier. The power of art and...love? desire?...help partially heal Tom as he looks back at the summer from years later. The importance of savoring what we have while we have it, not taking time for granted, proves to be one of the lessons he learned that summer:

Then (and I can’t explain it) the numbness went and I knew that, whatever else had befallen me during those few weeks in the country, I had lived with a very great artist, my secret sharer of the long hours I’d labored in the half-light above the arch. So I turned and climbed the ladder for a last look. And, standing before the great spread of color, I felt the old tingling excitement and a sureness that the time would come when some stranger would stand there too and understand.

It would be like someone coming to Malvern, bland Malvern, who is halted the thought that Edward Elgar walked this road on his way to give music lessons or, looking over to the Clee Hills, reflects that Housman had stood in that place, regretting his land of lost content. And, at such a time, for a few of us there will always be a tugging at the heart—knowing a precious moment gone and we not there.

We can ask and ask but we can’t have again what once seemed ours for ever—the way things looked, that church alone in the fields, a bed on a belfry floor, a remembered voice, the touch of a hand, a loved face. They’ve gone and you can only wait for the pain to pass.

Oh, I love A Month In The Country. It packs such a punch for a small tale in a deceptively gentle setting!

And the symbolism of their work is so...obvious (Moon and Birkin digging deep or uncovering what's there) but somehow still feels like it was done with a light touch. Not to mention his descriptions of the summer--I could feel it as I read it.

I meant to ask if anyone has seen the 1988ish adaptation with Colin Firth and Kenneth Branagh and how it compares to the book.