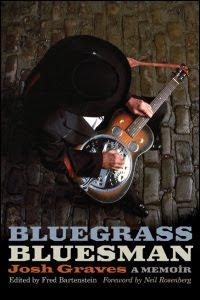 If you would like an alternative to the rock autobiographies piling up lately I’ve got a recommendation. Josh Graves (1927–2006), the legendary Dobro player, gave several interviews over the last ten to fifteen years of his life, several specifically for an “as told to” autobiography. Fred Bartenstein compiled these interviews, allowing Graves to tell the story of his life in an extremely fun format, full of anecdotes and ruminations. It’s a loose, rambling presentation I think works extremely well.

After kicking around the bluegrass circuit and building a name for himself, Graves joined The Foggy Mountain Boys, the backing band for Lester Flatt and Earl Scruggs, as a bass player in 1955. He switched to Dobro, adding to the group’s distinctive sound since no other bluegrass group used the instrument. The rest, as they say, is history as Graves became known as a Dobro pioneer.

Growing up in east Tennessee, Graves was greatly influenced by the blues he heard and friendships he made with black musicians. As Bartenstein comments in the introduction to a chapter,

Lest anyone think that bluegrass arose in simpler, gentler times, a few sample stories of Grave’s wild and reckless relatives will set the record straight. His formative musical experience took place in a time when violence and poverty roved through the mountains like a fiddler through the bands. (page 79)

Growing up in the depression, Graves recalls his mother sending the kids down to the highway to see if they could find any roadkill. Contrary to his father’s wishes, Graves quits high school and sets out on his own to play music. Kicking around different groups, he eventually was invited to join Flatt and Scruggs, staying with them until the two parted ways in 1969. Heavily in demand as a session player, Graves also recorded many albums and became a member of both Lester Flatt’s Nashville Grass and the Earl Scruggs Revue. Graves tells about life on the road over the several decades, always including insight on the money involved in such an endeavor.

Included in Graves' ruminations are some things in (the then) modern bluegrass world that had been lost over the last few decades (including technical aspects, which I’ll skip here). An area he relishes talking about is the comedy routines he and Jake Tullock performed as Uncle Josh and Cousin Jake. While he doesn’t feel shows need to keep a comedy act, he does lament the general lack of interaction between performers and audience. As part of that interaction, Graves places a lot of emphasis on performers encouraging their fans, recalling how when he was about nine years old he almost wet his pants when meeting Cliff Carlisle (a Dobro player for Jimmie Rodgers and other groups). Carrying on that tradition, Graves fondly tells about meeting and encouraging a twelve-year old Jerry Douglas. The final chapter provides testimony from Graves’ contemporaries and many people he influenced, including Douglas who recalls the meeting and getting to play “the Holy Grail of Dobros” when Graves takes time to give him a lesson around a campfire after a show.

Here are a couple of excerpts to give you a flavor of Josh Graves’ anecdotal style:

When I’m doing my shows, I like to do one gospel tune especially. I like to do that for the old people out there, and I just love to do it. But I won’t do over two…. If I did I’d have to go out there and take up a collection, you know. (page 67, ellipsis in original)

The younger guys, they don’t know it. They think they do, but they don’t. If you spend as many hours as I have sitting and studying that stuff, you’ll know what I’m talking about. You go to some of these shows and you watch it. I’ve been so bored, I’ve got so I won’t even go out and watch a group anymore, because I get mad with the fact that they don’t put any drive in it. Maybe I’m getting senile now. (page 73)

Two of my sons are having a little controversy now; they can’t get along. I said, “I’ll do you like my Uncle Bud did his boys.” They couldn’t get along; they was drinking and all this, and he said, “Next time you come around like that, I’ll fix you.” A couple of weeks went by and they done it again. He lined every one of them up and shot them in their ankles. He got their attention. My cousin told me, “I picked buckshot out of my ankles for three months.” But he never had no more problems. (page 80)

If you're not familiar with Josh Graves, there are several tunes featuring Graves on YouTube. While Fireball is one of the more famous tunes featuring him, I enjoy songs like Foggy Mountain Rock that highlight his blending of bluegrass and blues.

I'm sure I'm showing my redneck roots, but Bluegrass Bluesman is a memoir I thoroughly enjoyed and have no hesitation in recommending.

If anyone reading Neil Young's book comes across a passage where he talks about a drunk hockey fan spilling some beer on him, then making things worse when apologizing by calling him "Mr. Young," just know that it is a lie. I was only tipsy while naturally uncoordinated, not drunk.