Our Friend Manso: the education of Manso 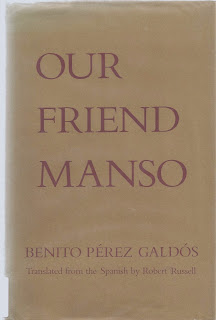 Previous posts on Our Friend Manso:

I do not exist: on Manso’s special status
The education novel: from a “simple and pleasant story” to instruction
Female characters and the education of women: searching for the golden mean

The same perverse friend who had brought me into the world took me out of it, repeating the same magic words he’d said way back then, and also the diabolical sorcery of the bottle, the drop of ink, and the burnt paper which had preceded my incarnation.

“My dear fellow,” I said to him, “will you please have done with me once and for all and take back this mortal flesh you’ve put me into just for your own amusement? It’s not the least bit amusing to me…!”

As he let me slip from between his fingers, the serenity I felt made me realize that I was no longer a man. (page 258, ellipses in original)

The irony lies in the fact that a) Manso, in self-confession, was never a real man, just a character in a novel, and b) even as a character Manso wasn’t much of a man. Galdós telegraphs the last fact since “manso” means docile or meek, a fitting description for Máximo Manso. Even though he is an excellent narrator, Manso turns out to be a poor author of his fictional life in a tale where there is little separation between art and reality. Even though the novel highlights the idea that fictional characters aren’t in the real world, it also reinforces the belief that the logic and laws that govern fiction do not differ from reality.

Manso is a poor author of his own life inside the novel because he fails to fully participate in it. While everyone respects his professional work, his insistence on avoiding many aspects of life isolates him from much that makes the other characters human. Even though Manso sets things in motion to lead to a happy ending for most of the characters, he has marginalized himself in most every context. Supporting this marginalization lies a demonstration (by the “author,” not Manso) that there is no place for a man of honor and principle in (then) modern-day Spain.

In a novel focusing on education, Manso’s epiphany represents, possibly, the most education a character receives in the novel. During his epiphany, Manso identifies the reason for the problem with his passion for Irene—it was based on ideals, not reality:

What had happened to that repose and marvelous equilibrium of the North European woman I had seen in her? In those fine qualities, as in others, I had got the notion that she was, among all the creatures I had seen on earth, the most perfect. Oh, those perfections were in my books, they were the product of my penchant for thinking and synthesizing, and of my too-frequent dealings with an idea of unity and with the great laws of that deadly gift for perceiving archetypes and not persons.

Without a doubt, it’s a Cervantean resolution in a Cervantean world, where Manso’s idealism gets in the way of reality. In addition to Irene’s beauty, manner, and bearing, her education and (apparent) interest in books and learning attract Manso to her. Once he sets his ideals aside, reality turns out to be much more interesting for him:

My new affliction consisted of having a vision of her bereft of all the perfections in which my ideas had clothed her, and in realizing I found her more interesting and loved her more this new way. In a word, I reached the point of feeling a burning idolization of her. A strange contradiction! When she was perfect, I loved her in a Petrachan way, with cold sentimental feeling that might have inspired me to write sonnets. Now that she was imperfect, I adored her with a new and tumultuous affection, stronger than I and all my philosophizing. (page 227)

At one point in the novel, Manso stands admiring the portraits hanging in Doña Cándida’s living room. Both pictures depict shipwrecks, which highlight the shipwreck of his life and his ideals. Unfortunately for Manso, his realization came too late to assist in his passion for Irene—she was about to be married to his former student, Manuel. Perhaps if he had been more of a real man…OK, a fictional real man…things might have turned out differently between Manso and Irene. But in a wonderful little novel highlighting the distance between the fiction and real life, Galdós emphasizes the real-life logic that novels follow to appear realistic.