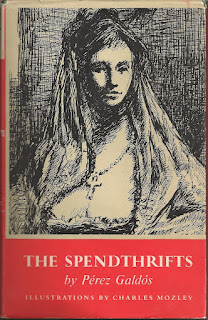 My previous posts on The Spendthrifts:

One: a Spain that does not understand anything except eating and digesting

Two: The ceremony? It was nothing.

My introduction from the first post on the novel:

Set in 1868, the year of Spain’s Glorious Revolution, the novel takes place in the Royal Palace of Madrid among members of the court’s bureaucracy. Galdós’ title of the novel was La de Bringas, but the translated title reflects many residents of the Palace were ruining themselves through extravagance. Galdós uses these individuals as symbols for the decay that has progressed throughout the entire administration. From the introduction by Gerald Brenan:

The rottenness of the whole regime becomes apparent and when, at the close of the sweltering summer, the Army, the Navy and the entire country rise with one accord and the queen flees to France, the curtain falls on this phantasmagoric society, so brilliant when viewed from outside but built on poverty and debt and emptiness. Thus The Spendthrifts is both an allegory of the ruling classes of Spain and a sermon on the classic Spanish theme, made familiar to us in Don Quixote, of illusion and reality. It is also a very brilliant, well designed and amusing novel.

Galdós has a message, but he seems to have more fun with the way he delivers it. At several points I wondered if he creates his characters in order to play with them—acting like a god, alternately rewarding or punishing them whether he agrees or disagrees with them. Don Francisco de Bringas represents the sober side of what Galdós would like to see in Spain, a willingness to spend within its means and recognize its limitations. Yet Galdós toys with him, having him blinded at one point. Every prediction Don Francisco makes about the revolution proves wrong. He turns out to be the least adaptable to the post-revolution Spain, although Galdós seems to admire him for holding fast to his ideals.

Galdós, a lifelong bachelor, paints extremely strong female characters. Refugio Sánchez Emperador, “a girl of doubtful character remotely connected with the Bringas family,” may be financially naïve but she is remarkably insightful when evaluating people. Her values are aligned differently from many of the other women who look down on her, although Galdós casts her in a favorable light and provides her the delicious scene of toying with Rosalía de Bringas, Don Francisco’s wife, in Rosalía’s hour of greatest need. Rosalía incorporates many aspects of Spain that Galdós wanted to show—willing to do almost anything to satisfy her fashion fix, only worrying later about how to get out of debt. Rosalía learns from her mistakes, eventually, and turns out to be the most flexible of the family in adapting to post-revolution Spain.

The opening chapter of The Spendthrifts starts with the narrator describing a mausoleum and the landscape surrounding it. Soon the reader realizes he’s describing a “beautiful work of art.” Eventually he provides the detail that the “cenotaph was, in fact, a hair picture, a form of art which once had a certain vogue.” The hair picture provides the novel’s conceit, a memorial for a bygone era that has passed, not to mention being at the center of several key plot points. For anyone not joining in the Fortunata and Jacinta read-along, The Spendthrifts is a wonderful introduction to Galdós. The scale is much smaller, although just as detailed, plus the narrator-games are just as playful. A “very brilliant, well designed and amusing novel” indeed. Highly recommended.

Article: Imagery of light and darkness in La de Bringas

Galdós, as a man of the self-conscious nineteenth century, was indelibly impressed with the many advances and changes of the epoch in which he lived. The century was self-contradictory; it contained both stifling darkness and blinding light. The Monarchy fell because it was an emblem of darkness in a more and more light-filled world. In this sense, the antinomy of light and darkness serves as a political symbol. ... By extending Galdós' light and darkness imagery in the novel further, however, we see his implicit hope that the twilight and darkness of the Isabelline reign would give way to a dawning of political glory with the new republic to follow.