Deliverance, the movie, 40 years on 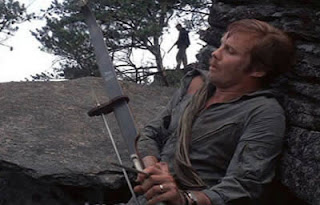 While I'm away from wifi service I have a few miscellaneous posts lined up...

Many thanks to Sheila O'Malley for the link to Kim Morgan's interview with the four stars (Jon Voight, Burt Reynolds, Ned Beatty and Ronny Cox) of the movie Deliverance. She only had ten minutes for the interview. Ten minutes. As Sheila asks (and answers), "How do you interview these four powerhouses about this seminal film in ten minutes? Watch Kim work her magic." A wonderful interview.

My favorite part is the tie-in between the book and the movie and Voight's role at one point:

Kim Morgan: (To Voight) One of my favorite scenes is when you have to scale that mountain, and you have to take over the “hero” role, but it’s not as simple as that. And I know you really did get on that mountain, so the feelings there are so authentic and it’s so sad and terrifying. One of the most powerful moments is when you lose your family photos, when they drop out of your hands… it’s just so heartbreaking.

Voight: Yes, yes. When he's losing his touch with his family. What that reminds me of is all the guys that we send to war. You understand what they go through. They go through all of those feelings and then they have to put themselves on the line… they don’t know if they’re coming back. All of those guys -- that’s true bravery. Anyway, that piece of the film in the book is brilliantly written, of course when you’re doing a film, as opposed to the novel you can’t get all this stuff in. But with these two brilliant imagists, Dickey on the one hand and Boorman on the other -- one gives you the visual poetry and the other gives you the verbal poetry. But in the book it goes on for five pages… It was exciting to participate in that [scene]. It was the one thing that drew me to the film, that scene, that moment that you’re talking about. When he has this catharsis in the middle and a crisis and he almost breaks apart halfway up the climb, and he loses his touches with his family and civilization, and then he has to get himself together and then continue on the way. It was exciting to be the person to embody that one chapter in the book.

As the saying goes, read the whole thing.