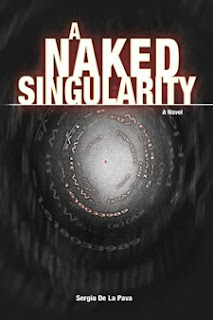 Note: I read the Xlibris version of the book (pictured above).
The University of Chicago Press is scheduled to release the book May 1.

Last Fall Levi Stahl noted that this book would be released by The University of Chicago Press this Spring. I'll plagiarize part of his post to give you a feel for the book:

It's linguistically inventive and simmering with anger at social and legal injustice, all told in the unforgettable voice of the protagonist, Casi, a wunderkind public defender in Manhattan who's never lost a case. It's as funny and smart as anything I've read since Helen DeWitt's The Last Samurai, and it ranges widely in its concerns, scenes, and style: it offers courtroom drama, media satire, a ridiculously long scat joke, snappy dialogue, immigrant stories, boxing commentary, and even a heist worthy of Richard Stark. It's indebted to Melville and Dante, kin to David Foster Wallace and William Gaddis, and still not quite like anything else I've ever read.

There are plenty of links on Mr. Stahl's post that I recommend in order to find out more about the book. I was planning on ordering the upcoming release but happened to see a copy of the self-published version in a used bookstore. Obviously my self-restraint needs work. Regarding the excerpt I quoted, I haven't read some of the writers he mentions but I will agree with the descriptors--inventive, simmering, funny, smart, unique.

Steve Russillo has provided an A Naked Singularity page, a "mish-mash of impressions," that will be helpful when encountering any confusing part of the novel.

So...what is a naked singularity? Without going into much detail (that’s what the link is for), it’s a black hole that can be observed from the outside. For the book, the metaphor is explicitly used toward the end as Casi’s world collapses on itself and we’re allowed to view it. But for the rest of the novel, it’s a metaphor for the reader’s ability to watch ___________(fill in the blank: the breakdown of Casi’s world; the black hole of the modern criminal justice system; other mentioned failures of modern life).

The commentary on the criminal justice system proves to be fairly devastating. As a public defender, Casi doesn’t hide the fact that his clients are guilty and often screw-ups of the highest order. Yet they deserve a fair trial, something difficult in a system rigged for…well, it’s difficult to tell exactly what it’s supposed to do at times. Early in the book there is an exchange between Casi and the judge that sums up that confusion:

One of the sub-themes I enjoyed, and there are many, involves the question of what makes a person real to us? “How does someone go from being a collection of flesh and bone who generally occupies the same space as us to being a real person who has an inner life that we, on some level, care about.” How do you get beyond the self? What makes you respond to one person in need while remaining indifferent to others?

If you think you might be interested in the book, please read the links—they will provide more information on it than I will here and their praise is warranted. I’m not up to adding more commentary on a book that is wonderfully all over the place while retaining its focus.

My recommendation will be more guarded than the referenced links, though. That's probably more a reflection of me than the book. I loved the first half but when it shifted to the planning and execution of the heist that part didn’t hook me the way the rest of the book did. There are several reasons for that—some have to do with my preferences but others have to do with consistency in the book that I found lacking at this point. Other readers will enjoy that part much more than I did.

I’m happy to see The University of Chicago Press picking up this book and I hope it does well. If you’re a fan of any of the referenced and compared works mentioned in the links you should enjoy this one, too.

Update (28 Aug 2012): In which I exert minimal effort to find out if The Orchard existed.

Update (9 Oct 2012): An interview with Sergio De La Pava at "The Believer Logger"