Georg Letham: Physi­cian and Mur­derer by Ernst Weiss: “Illnesses interested me, the ill did not" 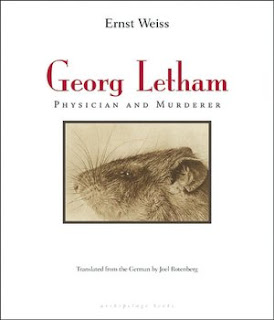 As you can tell from the list of sections in this post the focus of Georg Letham: Physician and Murderer goes well beyond the murder and trial of his wife. After Georg’s conviction for the murder of his wife he is exiled to the penal colony of C. (somewhere in South America). While there he becomes an integral member of a medical team searching for the cause and a cure for yellow fever. Among the many characters we meet are Georg’s misanthropic father, fellow-prisoner March with a tremendous crush on Georg, Georg’s classmate Walter heading the medical team on C., and the young yellow-fever patient Monica with whom Georg falls in love. Yet the account “of such a life”, the task of this particular modern novel, covers so much more than a simple recap would provide.

The novel is a modern horror story, a worthy descendant of Mary Shelley’s Frankenstein. In Georg’s mind, fate arranges the circumstances leading to the murder of his wife and makes the outcome preordained. The reader realizes otherwise, of course, and the events continue to unfold in a gruesome manner. To make the novel more intense there are several similar horror tales. Some are subtle, such as the torture the prisoners endure while waiting to board the ship which will take them to the penal colony in addition to the ongoing tension once onboard. While working on yellow fever research Georg watches a horrific event unfold, doing nothing to halt it, the results of which could have been comparable to his wife’s murder. That’s the appeal of the book and the part that makes it horrifying—here is a man, morally detached from humanity, operating in fields with life or death implications for patients and subjects. Georg introduces the book as his study into why he did what he did, noting his unreliability as a narrator.

The section I found most effective in the horror mode was Georg’s father’s expedition to the North Pole (one of the many shadows of Frankenstein). Let’s just say there is a reason a rat is on the cover of the book. Wait, make that more than one reason. I found I couldn’t put the book down during this section. Another reflection of Frankenstein includes the focus of science separated from morality. As mentioned in the introductory post, Georg viewed wealth and knowledge as the only things that could give a person a foothold in the world. Since wealth was denied him while married and inaccessible in prison he focuses solely on knowledge. His clinical approach in the attempt of scientific progress adds to the reader’s revulsion toward Georg as he shows little mercy toward anyone or anything while advancing his cause. Georg's rationalization for his behavior includes his belief that man is an experiment on the part of nature so his actions are a natural continuation of that dynamic. I have seen the book described as an allegory for fascist mentality for just this separation of actions from morality as well as his search for the greater good regardless of cost, which it is, but it is also so much more.

The novel is also a story of redemption—one of the haunting questions is whether or not the reader believes Georg achieved it. His service in finding the source of yellow fever proves to be admirable but there are several moral bumps along the way. The complexity Weiss provides makes any judgment a hazardous guess. Georg pins his redemption on science and what he can achieve, but his methods and actions make his intentions problematic. Early in his narration he reveals the level of his interest in science and mankind which follows for most of the book: “Illnesses interested me, the ill did not.”

The novel is also part love story, although almost all of the relationships are unhealthy. Maybe it would be more correct to say that Weiss highlights the power of love's absence. Georg’s emotional arrestment, fostered in part by his father’s misanthropic behavior, shapes a man unable to connect with anyone else. His descriptions of his relationship with his wife are as horrific as other parts of the novel. A fellow prisoner, March, falls in love with Georg but is crudely and consistently used to Georg’s advantage. The one relationship that could have had redemptive qualities—Georg’s feelings for the yellow fever patient Monica—proves to have its own problems. Georg’s disdain for those with “loving hearts” permeates the novel as he openly shows contempt for those that think they can provide comfort and love. Paradoxically he displays and desires such benefits when he longs to see his brother on the day he boards the Mimosa for the penal colony or when he sees his love for Monica as part of his redemption (and there are more examples). Such is the complex nature of Georg and the novel.

Update (30 Jan 2013): Life imitates art in Helen Rittelmeyer's post on The Redemption of Nathan Leopold, Maybe. While there are important differences between Leopold's and Letham's stories, the similarities can be eerie at times.