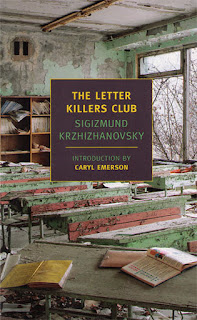 I’m at a loss. I liked this book. Or rather I liked the concept of this book and most of what I read. But I’m having trouble thinking of anything, or at least anything original, to say about it. I’ve had a draft sitting in the queue for publishing for two weeks (which is, now that I think about it, most appropriate). Trevor at The Mookse and the Gripes provides an enthusiastic review of it. Lisa at Lizok’s Bookshelf had a guarded review, intrigued about certain aspects while disappointed by others. Lisa also provides additional online reviews of the book. I find myself somewhere between Trevor and Lisa—I liked it…I recommend it (it really is a fun read)…and yet I can’t find much to say about it.

Update: Scott Esposito has a good review at The National, too.

Instead of a normal post, I’ll include a few of my thoughts as I read it. My notes won’t mean much unless you understand the format of the novel: the book focuses on a secret group of men who see conceptions as purer than what is committed to paper. These “conceivers” meet each Saturday in an empty personal library to relay their conceptions, challenging each other to perfect their tales.

A few of my notes:

• The introduction by Caryl Emerson is one of the best intros in the NYRB Classics series I’ve read.

• The book begins with an introduction to the club and the “president” of the group:“Yes, remember this, my friend: if there is one more book on the library shelf, that is because there is one less person in life. If I must choose between the shelf and the world, then I prefer the world.” (page 5) After selling his books in order to attend his mother’s funeral: “The boards, though relieved of their burden of books, were still bowed, as if the emptiness were weighing them down.” The sold books would prove to make themselves felt long after their departure. They proved to mean more in their absence as the writer “turned them into manuscripts, and the manuscripts into money.” Although by using then as a source of writing he dried up their influence. (pages 6 – 8)

• “Writers, in essence, are professional word tamers”. “I knew that I was turning into a professional killer of conceptions”. (page 9) Focusing on “conceptions” instead of the written story, the host of the club decided to kill “those freaks and dealt ruthlessly with my old writerly ways.” (page 10) Thus the beginning of the club. So a question to keep in mind—how does Krzhizhanovsky’s written story fit into this mold? He is not “letterlessness”, obviously cultivating his “garden of conceptions” in direct contrast to a “burden of empty shelves”. (page 11) Who has the “right” to an idea? And what gets displaced when a new idea, one’s own or someone else’s, enters the mind? (page 12)

• The first story…rather, concept…playing on the doubling of character in Shakespeare, Hamlet in particular, proves to be the most fun of all the concepts. Not only is there a doubling of character, Krzhizhanovsky highlights separate existence of a character’s role. “As an actor, a professional speaker of other people’s words, he may not be able to find his own words to explain himself—his reflected self—to his reflection. I think this is all fairly simple: every three-dimensional being doubles himself twice—reflecting himself outwardly and inwardly. Both reflections are untrue: the cold, the likeness returned by the looking glass is untrue because it is less than tree-dimensional; the face’s other reflection, cast inward, flowing along nerves to the brain and composed of a complex set of sensations, is also untrue because it is more than three-dimensional.” (page 20)

• This story proves to be a fun romp as an actor, losing himself in a role, explores the many existences of Hamlet..his provisional existences, that is. Those that want to see the role will, those that don’t will not. Burbage: “The let’s trade places: why shouldn’t a role play an actor playing roles?” (page 26) Straight out of (or rather into) the movie Tropic Thunder.

• The second story, The Festival of the Ass, looks at the power of words, then is reassembled into a different story exploring the importance of appearance. The conceiver loses control of the story since people and characters are “outside the authorial design”. He then explores the difference between people-plots and people-themes:”[P]eople-plots are very troublesome for a writer—their lives contain so many acts, encounters, and conincidences; put them in a story and they expand it to a novella, or even a novel; people-themes exist immanently, their plotless lives are off the main roads, they are part of an idea, reticent and passive… .” (page 47) (Shades of Miguel de Unamuno, which is to say a natural continuation of Don Quixote, Part Two)

• The third story runs along the lines of a science-fiction tale, where human bodies are controlled by something else—what happens to the mind? The “I”? It’s easy to read too much politically into this (1920’s Russia), but it’s interesting to wonder how much of that was intended. He explores the difference between freedom of will and freedom from will. He also dabbles with the theme more famously explored by Orwell—those that control language controls all. The paranoia and mistrust that arises in the story also plays itself out within the storytellers’ group.

• Telling stories versus sharing them (by writing or other means)—can conceptions withstand the test of the sun? Stories cultivated without light are like plants—“fragile, withered, and pale.” (page 81)

• The fourth story, “Tale of Three Mouths”, looks at the fixation on symbols instead of what lies behind a symbol, giving it its power and meaning. Also, how riddles are “always made up of its answer”, regardless of the many places we look for it. (page 99)

• The final story looks at a dead Roman scribe, his coin for the ferryman Charon stolen so is trapped on this side of the river Acheron.

• All the stories explore what it means to step outside the “I” as well as the limits imposed on the "I".


Update (15 Nov 2013): an excerpt from Adam Thirlwell's introduction to The Autobiography of a Corpse by Sigizmund Krzhizhanovsky can be read here.

Thank you for mentioning my post about The Letter Killers Club... it was interesting to read your "in-between" take on the book. It's difficult to explain why the book didn't grab me as much as I might have liked, though I think the fact that I enjoyed the first story--the Hamlet piece--the most is probably telling!

Despite my disappointment with this book, I truly am looking forward to trying more of Krzhizhanovsky.

My pleasure on the mention--I was happy to see a similar response as mine.

I'm looking forward to exploring more from him as well. I found him intriguing even if this didn't completely grab me, either.