Debits and Credits: The Changelings and Sea Constables 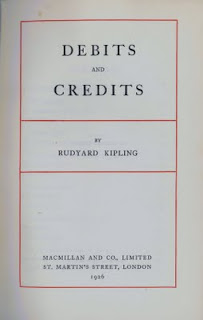 I’ve started Debits and Credits by Rudyard Kipling and I’m impressed once again by Kipling’s storytelling power. Not to mention I’m at a loss as to why I haven’t heard more about this collection since it has some of his best writing. But then I’m only a few stories into the collection. We’ll see how it goes over the next couple of weeks. So what’s in Debits and Credits? Nineteen poems, fourteen stories, and two scenes from a play (unfinished).

Or ever the battered liners sank
With their passengers to the dark,
I was head of a Walworth Bank,
And you were a grocer's clerk.

I was a dealer in stocks and shares,
And you in butters and teas,
And we both abandoned our own affairs
And took to the dreadful seas.

Wet and worry about our ways---
Panic, onset, and flight---
Had us in charge for a thousand days
And a thousand-year-long night.

We saw more than the nights could hide---
More than the waves could keep---
And---certain faces over the side
Which do not go from our sleep.

We were more tired than words can tell
While the pied craft fled by,
And the swinging mounds of the Western swell
Hoisted us Heavens-high...

Now there is nothing---not even our rank---
To witness what we have been;
And I am returned to my Walworth bank,
And you to your margarine!

To say the poem takes a dark turn may be a misstatement since the opening two lines telegraph what the banker and grocer’s clerk will see during World War I. Nothing fits in this scenario—not seeing more than the waves or night can hide nor returning to the pre-war life after witnessing such horrors. The last stanza contains a disturbing twist as well—“To witness what we have been”. Not “seen”, which would come close enough to fit the rhyme, but “been”. It’s light verse that becomes more disturbing every time I read it.

The story that follows the poem, “Sea Constables: A Tale of ‘15”, fits the same disturbing pattern. The structure of the story is simple---four men eat at a luxury restaurant in a London hotel while comparing experiences of serving in the Royal Naval Volunteer Reserve. Their conversation focuses on a blockade runner that several of them dealt with recently. The meal they eat and the wine they consume (yes, I’m jealous on this point) are exceptional, leading to a physical numbness that mirrors the moral detachment in their stories.

It helps to understand the background of the story, where the British employed private yachts for a ‘soft’ blockade of ships to or from Germany, although the context can be figured out from the story itself. As a couple of the diners tell their experience in dealing with the declared neutral party, they make it clear there is no such thing as neutrality for oil-runners like “Mr. Newt”. But Kipling also highlights the moral cost and degradation possible in war through the actions of several members in the party. Will they be able to go back to selling groceries or work in the bank after what they’ve been? The most disturbing part of the story may be that they think so.

Kipling is, I think, now out of fashion due to the perception that he is too into his Euro-centric few of the world-very few can get beyond seeing him as a racist-

Eh, their loss at an inability to see both sides of the equation in Kipling's worldview. Not to mention Kipling's change...these stories come from a very different Kipling. Or as Edmund Wilson said about some of his late work, the Kipling that nobody read.