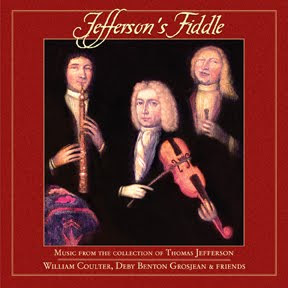 "Jefferson's Fiddle is a delightful collection of modern arrangements and readings of classical and traditional repertoire that showcase Thomas Jefferson’s extensive music library."

I expect the interest in the music on this recording to be limited but I also post this for the liner notes available. Here is the note for "Jefferson and Liberty:

In Jefferson’s time, as today, music was a key component in political campaigns. His 1800 presidential campaign song was set to a traditional Irish jig, called “The Gobby-O.” Our modern arrangement sets the tune in three different keys. Though our version is instrumental, the lyrics came from a poem attributed to ornithologist-painter Alexander Wilson. Today, it is regularly performed at contra dances.

The refrain:
Rejoice, Columbia’s sons, rejoice
To tyrants never bend the knee
But join with heart, and soul and voice
For Jefferson and Liberty.

The local community radio station played parts of this during my drive home from work on Friday and I found it enjoyable, both the music and the history behind the songs.