Gang of One: hearing the heart's laughter 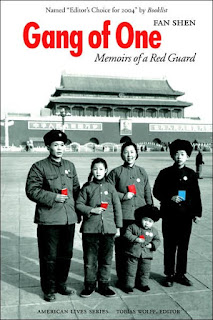 Gang of One: Memoirs of a Red Guard by Fan Shen (University of Nebraska, 294 pp.)

From the University of Nebraska Press page:

In 1966 twelve-year-old Fan Shen, a newly minted Red Guard, plunged happily into China’s Cultural Revolution. Disillusion soon followed, then turned to disgust and fear when Shen discovered that his compatriots had tortured and murdered a doctor whose house he’d helped raid and whose beautiful daughter he secretly adored. A story of coming of age in the midst of monumental historical upheaval, Shen’s Gang of One is more than a memoir of one young man’s harrowing experience during a time of terror. It is also, in spite of circumstances of remarkable grimness and injustice, an unlikely picaresque tale of adventure full of courage, cunning, wit, tenacity, resourcefulness, and sheer luck—the story of how Shen managed to scheme his way through a hugely oppressive system and emerge triumphant.

Gang of One recounts how Shen escaped, again and again, from his appointed fate, as when he somehow found himself a doctor at sixteen and even, miraculously, saved a few lives. In such volatile times, however, good luck could quickly turn to misfortune: a transfer to the East Wind Aircraft Factory got him out of the countryside and into another terrible trap, where many people were driven to suicide; his secret self-education took him from the factory to college, where friendship with an American teacher earned him the wrath of the secret police. Following a path strewn with perils and pitfalls, twists and surprises worthy of Dickens, Shen’s story is ultimately an exuberant human comedy unlike any other.

A memoir that lives up to its billing, Gang of One relays some of Fan Shen’s experiences during the Cultural Revolution and his struggle to leave China. His disillusionment and reaction leads to a triumph of the will and intellect. One aspect of his book I though might resonate with blook bloggers/readers was the recurring theme of the importance of literature in his life. A few examples of this theme in the book:

- The book opens with Shen’s participation in a book burning event at the start of the Cultural Revolution. Eager to participate, knowing it will earn admiration from his “revolutionary” parents, the rebuke he earns from his sister (whose books he took from her shelves) stings him.
- One of Shen’s childhood friends takes him to a house used for storage of confiscated “bourgeois” property, their target a room that includes stacks of books. Grabbing a set of world literature in addition to other books he becomes enamored with heroes in books such as The Red and the Black and Martin Eden. “Love of Life” is another London story that later provides symbolic importance to Shen.
- Shen’s interaction with Li Ling, an intelligent woman from a formerly privileged family, inspires him to read widely and deeply in order to understand and discuss the books she mentions. His chance meetings with Li Ling over the years sound like something out of Doctor Zhivago.
- Forced to report to state agents once a month, Shen spins tales designed to baffle and bore the investigators that include twists and turns from Maupassant and O. Henry stories.

When reading a history book’s sweeping, calculated acts of cruelty on this scale it’s easy to lose sight of the plight of individuals as the body count rises to the hundreds of thousands or millions. Shen’s book does not attempt to transcend his experience or try to explain what happened from 1966 until his escape in 1985 on a national level, instead choosing to relay his experiences as well as that of the individuals whose paths he crossed, whether it was someone who strove to escape or tried to succeed in the administrative games. Those who stumble through their assigned life or attempt to escape through suicide provide some of the most poignant moments in the book.

Shen’s thoughts as he flies from China to the U.S. summarize the lengthy struggle it took to escape:

Through my blurred vision, I looked at the crystal water in my hand and thought of the bittersweet victory that I had won. After trying to escape for so many years—four years in the countryside, six years in the aircraft factory, four years in college, and two years in Tanggu and Tianjin—I had finally done it; I had beaten the Great Leader and I did not have to pretend to be a revolutionary anymore. … I took a sip of the salted water [from his tears], and for the first time in my life, I let my heart laugh.