The Road to the Open: a prophet without wrath 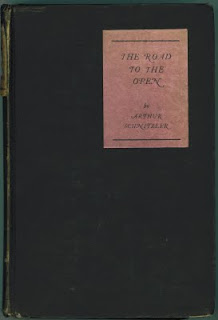 Previous posts on The Road to the Open:
Fin-de-siècle Vienna
My art is mediocre and so is my character
Grotesque and repulsive peculiarities

The version of the book I read was the translation by Horace Samuel, which can be found here. (Note that a couple of pages are missing in the scan)

I’ve finally finished The Road to the Open by Arthur Schnitzler and while Blogger is temporarily allowing me into my account I’ll try to post about it. I’ll start with the end of the review by Carl E. Schorske in Fin-de-siècle Vienna: Politics and Culture (Vintage, 1981):

The novel has no real end, the hero no tragic stature. Schnitzler was a prophet without wrath. The scientist in him avenged itself on both the moralist and the artist. As social observer and psychologist he drew the world he saw as necessitous, but not—like the true tragedian—as justified. Morality and the dynamics of both instinct and history were incompatible. Schnitzler could neither condone nor condemn.

Yet, as a proclamation of the death of a cultural idea, his novel has power. The break-up of Georg and his artist-sweetheart symbolizes the end of a half-century’s effort to wed bourgeoisie and aristocracy through aesthetic culture. Schnitzler shows that the historical force compelling recognition of this failure was the rise of anti-liberal mass politics. Appropriately, the pure and aesthetic Anna’s own brother is a vicious anti-Semite. While she is doomed to a humdrum petit bourgeois existence by her aristocratic lover’s weakness, her brother embarks on a promising if hideous political career. As for Georg, he is paralyzed by his own hypertrophied sensibilities, conscious of being driven by instincts within and an irrational society without. The social aristocrat can no longer control the reality; the aesthetic aristocrat cannot understand it. He can but feel his own impotence in a bourgeois world spinning out of orbit.

Aspiring to tragedy, Schnitzler achieved only sadness. One of his characters observes that there is no Weg ins Freie [Road into the Open] except into the self. Schnitzler, caught between science and art, between commitment to old morals and new feelings, could find no new and satisfying meaning in the self, as did Freud and the Expressionists; nor could he conceive a solution to the political problem of the psyche, as Hofmannsthal was to do. A despairing but committed liberal, he posed the problem clearly by shattering illusions. He could not create new faith. As an analyst of Viennese high bourgeois society, however, Schnitzler had no peer among his literary contemporaries. Like Ravel, he understood not merely the traditions of the world of the waltz but also the psychology of its individuals in their increasingly eccentric relation to the dissolving whole. He described as no other has done the social matrix in which so much of twentieth-century subjectivism took for: the disintegrating moral-aesthetic culture of fin-de-siècle Vienna. (pages 14 – 15)

Schorske packs a lot more into his short review and I highly recommend his book in addition to Schnitzler’s novel. I think his review is pretty much spot on except for a few minor quibbles…or maybe not so minor. I want to look at the struggle between the generations because I think that is one part Schorske touches on but doesn’t follow up on the implications. He notes that the title “refers to the desperate attempt of the cultivated younger generation of Viennese to find their way into the clear, their road out of the morass of a sick society to a satisfactory personal experience. After noting that many of the young Jewish characters turn “from the path which a just society might have left open” (but clearly Vienna didn’t) he turns to a look at the older generation. “Schnitzler views them positively now. It is as if he had made peace with his father. Though their values are anachronistic, no longer relevant to the social-psychological facts of life, the older characters still offer an example of stability, a basis for engagement in constructive work, and even a certain ground for human sympathy.” Yet the poisonous picture of Vienna Schnitzler paints comes from which generation? The younger generation lives in it and accelerate it, but the trends started earlier.

The disintegration of moral codes ushers in a freedom that opens possibilities, good and bad. “Anna is freed from negative repercussions about her pregnancy out of wedlock, yet that liberation also frees George from any commitment to her. Freedom is a double-edged sword, as Schnitzler presents here and in other situations. Schorske notes the struggle Schnitzler finds himself “between a renewed allegiance to traditional values and a scientific view of modern social and psychological reality which makes those values inapplicable. But Schnitzler takes pains to show the older generation loosened the traditional values while not providing anything to replace them. I don’t think it is a coincidence the book begins shortly after George's father’s death and George is shown unmoored, drifting even more than usual because of the loss. The father allowed George and his brother to abandon their university studies, amplifying George’s natural tendency to drift. Schnitzler seems caught between admiring and condemning the older generation. It’s nice that George is allowed to pursue his musical studies because of his talent but not everyone is a baron, treated deferentially by the bourgeois despite limited achievements.

There is so much more that can be explored in the novel. One area I think would provide a fun paper or post would be the importance of Wagner’s opera Tristan and Isolde in the story. What aspect of the opera did Schnitzler want to stress? The unachievable desires (driven by Schopenhauer’s influence)? The musical innovation? The topic of frustrated love? Other fun topics could be the importance of dreams. But all of these are secondary to Schnitzler’s study on the role of class warfare and anti-Semitism during the decline of turn-of-the century Vienna. So-called secondary characters provide a rich range of responses to the poisonous atmosphere around them. The metaphor of George and Anna’s stillborn child feels heavy-handed, yet it still works (think of Tolstoy’s use of the thistle in Hadji Murad for a similar example). My final quibble with Schorske: I’m not sure Schnitzler was “aspiring to tragedy”. Rather he seems more intent on documenting the social disintegration of Vienna and its impact, psychological and political as well as societal. Highly recommended.

Email ThisBlogThis!Share to TwitterShare to FacebookShare to Pinterest
Labels: Arthur Schnitzler, The Road to the Open