The Lord of Labraz: final thoughts 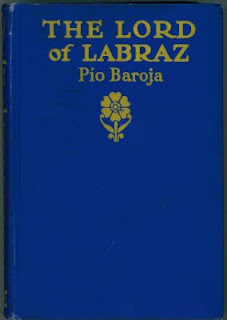 The Lord of Labraz by Pío Baroja, translated by Aubrey F. G. Bell, Alfred A. Knopf, 1926 (originally released in 1903 in Spanish)

I mentioned in an earlier post that decay was a central theme in this book. Labraz, an imaginary town set in the Cantabria region of Spain, fought progress tooth and nail and won (?) the battle. They shunned a railroad line allowing a nearby city, originally poorer than Labraz, to grow and prosper. “Labraz was a terrible town, a town of the Middle Ages. It had not a single level street, and the houses all had stone escutcheons. Nearly all of them were austere and silent; many were almost or completely in ruins.” The abbot spoke for much of the town when commenting on degeneration and the progressive young men pushing for regeneration:

”It is the revolutionary spirit,” he said. “Who is to blame that these young men will be the ruin of Spain? Their parents, their elders, all those who teach them to forget the practice of religion. So the Liberal spirit spreads like a weed; it penetrates into distant corners; and those madmen do not see it, those madmen do not perceive that the Church is threatened and society in danger.”

The irony drips from Baroja’s pen since he makes it clear that the Church and society are already corrupt and not worth saving, at least as represented by the abbot. Baroja’s Spain (in the few books I’ve read) has plenty of good and industrious people but misery and exploitation continually weigh them down. Much of the time characters simply struggle for life in a world caught between clashing principles. No wonder the English Mr. Bothwell loved Labraz enough to settle in it. In answer to a young idealist’s question as to whether or not they should search for the truth, Mr. Bothwell replies in the negative, wishing to stay happy in his agreeable dream, even if it’s an illusion:

“You wish, then,” answered Bengoa, “that we should sleep wrapped in our illusions as in a continual dream.”

“Exactly, but an agreeable dream.”

The blind nobleman at the center of the story suffers more than his share of tribulation but never completely sinks beneath the weight. He proves to be resilient, possessing a strength that occasionally reveals its full power. Ah, but it’s all supposedly a tale from the mind of Mr. Bothwell we’re reading. The narrator from the preface has seen the blind nobleman around town so he never renounced Labraz, nor did he leave for a trek across the heart of Spain. So have we been had or is Baroja using irony and paradox in the story to make a point? I’m not sure since he may be trying to have it both ways, which is fine by me. As I’ve said in previous posts the book feels a little frivolous and frothy at times but I enjoyed it.

My earlier posts on the book can be found at these links:

He was a stomach rather than a man 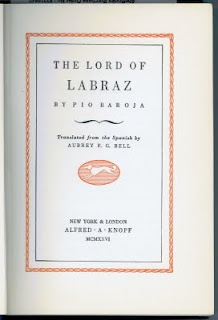 Email ThisBlogThis!Share to TwitterShare to FacebookShare to Pinterest
Labels: Pío Baroja, The Lord of Labraz