The Way We Live Now: A swindler greater than other swindlers 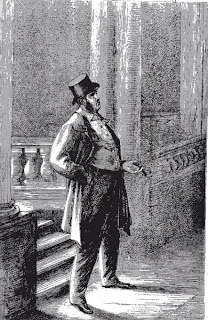 Having had a stomach virus work its way through the family this past week, I’m hoping things are returning to some sense of normalcy. While recuperating from my bout Tuesday, I watched about three-fourths of the BBC adaptation of The Way We Live Now. I hope to have a separate post about it once I finish watching but I will say that it is very well done and enjoyable. The differences from the book range from small to major, but my biggest complaint so far lies with the variances in the make-up of several characters—they may seem small but I think it undermines some of Trollope’s major messages. Well, maybe my bigger complaint is Mrs. Hurtle’s exaggerated accent. But more on that when I’ve finished watching it. What follows are some additional thoughts on Volume Two of the book through Chapter 75:

Melmotte
The reader sees more of Melmotte in this section than in Volume One and his downfall has already started. His arrogance and audacity know no bound even as the first rumors begin to circulate on the potential mortgage-title fraud. Roger Carbury proves to be the one character (in addition to Melmotte) that accurately perceives human nature:

”But we set no example to the nation at large. They who do set the example go to his feasts, and of course he is seen at theirs in return. And yet these leaders of the fashion know,—at any rate they believe,—that he is what he is because he has been a swindler greater than other swindlers. What follows as a natural consequence? Men reconcile themselves to swindling. Though they themselves mean to be honest, dishonesty of itself is no longer odious to them. Then there comes the jealousy that others should be growing rich with the approval of all the world,—and the natural aptitude to do what all the world approves. It seems to me that the existence of a Melmotte is not compatible with a wholesome state of things in general."

Melmotte understands public opinion and human nature, benefiting from their weakness. One of the delicious ironies of the book occurs when those human weaknesses which built him up trigger his downfall. He preys on people’s cowardice to do the right thing as well as the tendency for others to follow the crowd. But it is those weaknesses that cause the first chinks in his armor as people believe the rumors of his fraud (on the mortgage title). He counted on the benefits in acquiring a higher station in life, even if the acquisition was fraudulent:

It was supposed that the working-classes were in favour of Melmotte, partly from their love of a man who spends a great deal of money, partly from the belief that he was being ill-used,—partly, no doubt, from that occult sympathy which is felt for crime, when the crime committed is injurious to the upper classes. Masses of men will almost feel that a certain amount of injustice ought to be inflicted on their betters, so as to make things even, and will persuade themselves that a criminal should be declared to be innocent, because the crime committed has had a tendency to oppress the rich and pull down the mighty from their seats.

I don’t think he considered that that “occult sympathy” would turn on him because he would be perceived as one of the upper class, or rather he seemed to think he would be exempt from such tendencies. The crowd may follow him but once a few head for the exits, more will follow.

More on human nature
Trollope displays a remarkable sense of sympathy for his characters even while showing their frailty. At some point it is difficult not to feel pity for every character…well, except for Felix Carbury, even when he is beaten to a bloody pulp. Paul Montague rivals Felix for the amount of emotional pain he causes, yet he is still a sympathetic character (or at least to me…I can see why he may not be to others). Why is that? It isn’t that he hits a moral snooze button—he does want to do the right thing but he also wants to avoid hurting others. As Trollope stated earlier, “In social life we hardly stop to consider how much of that daring spirit which gives mastery comes from hardness of heart rather than from high purpose, or true courage.” Good intentions are not enough.

Trollope also makes his characters human by introducing imperfections, even in Melmotte’s case. The man may be a monster, but he’s not larger-than-life. His environment is finance and graft, which for him are the same thing. He’s out of his element speaking to crowds (at least when not prepared), his one exception being his impromptu speech in Covent Garden, his dreams on the line by this point. He makes a complete ass of himself his first day in Parliament. It's as if he is an actor but can only handle certain roles.

Price
As you would suspect in a novel that draws parallels between an amoral financial world and untethered social standards, money dominates The Way We Live Now and almost everything has a price tag. Trollope makes the point a bit heavy-handed at times, particularly regarding marriage, but it dovetails perfectly with his overall point on parallels. Several women in the novel remark that they feel “as though my very soul were not my own” or haven’t “any self of my own at all” but are chattel to be disposed of as others please.

Other items with a “price” involve social standing and what it costs to acquire them, whether monetary or moral. Such is Lady Monogram’s dilemma when she has already compromised her standards in acquiring a ticket to the emperor’s dinner reception and debates whether to go: “She had paid her price, and with that economy which sticks to a woman always in the midst of her extravagances, she could not bear to lose the thing that she had bought.”

Trollope pulls no punches on what he shows can be bought and sold. The chapters involving Melmotte’s buying of religious votes provides a sad commentary on where he sees the current state of religion—while he seems particularly harsh on the Roman Catholics, he spares nothing against the Protestants. In a conversation between the Bishop of Elmham and Roger Carbury, Trollope points to the hollowness of Anglican official’s claims:

"We build churches much faster than we used to do."

"Do we say our prayers in them when we have built them?" asked the Squire.

There are so many other areas that could have their own post, but at least a comment on a few of them:

I’ll hold off commenting on the anti-Semitism prevalent in this section because I want to see where Trollope takes it.

While there are many conflicts in the book such as religious, class, or gender, the one that seems to be at once most obvious and most understated is the generational conflict.

There seems to be some inconsistency on the sale of the Longstaffe property and Dolly’s role in it. He initially opposes the sale, then seemingly accepts it (anxious to get his money). Finally we learn that Melmotte definitely forged his signature. While such a change of heart isn’t unreasonable, it seems more like Trollope changes his mind on the importance he wants to place on this episode. I love the fact that while the massive fraud of the Mexican railway gathers steam, a simple signature on a title document begins the unraveling of Melmotte’s schemes.

Maybe one way of describing what the characters have to achieve in The Way We Live Now is facing up to the truth. Not that they have to blindly accept their situation, but realizing what they can and can't change. Mrs. Hurtle gets to this point first, using "such weapons as she possessed" but finally releases Paul Montague from his obligation. I'm not sure this approach or viewpoint will hold with the remaining resolutions.