The Way We Live Now: He does not wish to see 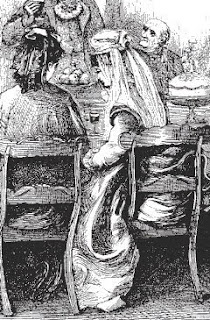 Lionel G. Fawkes, Detail from "Mr Mixet of course made a speech" [Ruby as the "happy" bride], The Way We Live Now
Picture source

While there are many possible topics to cover in the last twenty-five chapters of Trollope’s novel, especially with the avalanche of weddings, I’m going to limit myself to two areas I struggled with in my reading involving Trollope’s direction and intention.

Characterization of the book
Summaries about The Way We Live Now focus on Trollope’s satire about the greed and dishonesty rife in every aspect of society of his age. While this is true, these summaries sound like the author finds nothing redeeming about the current age. On the contrary, there are several instances where Trollope points to improvements in and hope for society. One area involves anti-Semitism, which I’ll save for the next section.

Through Mr. Fisker, an American businessman (and con man, to some extent). Trollope sums up some of his description of America: "After the sort of society you've been used to here, I don't know how you'll get on among us Americans. We're a pretty rough lot, I guess. Though, perhaps, what you lose in the look of the fruit, you'll make up in the flavour." Mr. Fisker points to many good things in America, especially stronger rights for women, to offset many of the rough edges in other descriptions. I found it interesting that the two American characters in the novel, Mr. Fisker and Mrs. Hurtle, redeem themselves in some fashion by helping others. Trollope seems to view some of the changes taking place in America as something to be emulated.

The biggest area for hope lies within the characters, and thus within the readers of Trollope’s time. I’ve repeated Trollope’s aside about what it takes to do the right thing several times and will do so again here: “In social life we hardly stop to consider how much of that daring spirit which gives mastery comes from hardness of heart rather than from high purpose, or true courage.” Characters such as Roger Carbury and Mr. Broune are described at various times as seeming hard of heart while at the same time providing the most help to others. The difficult part for many characters revolves around when to be “hard of heart”. Many times they steel themselves at the wrong time for the wrong thing, mastering themselves but driving headlong in the wrong direction.

Near the end of the novel, Roger Carbury makes a speech about the disposition of property, but Trollope seems to be speaking about additional social obligation:

The disposition of a family property, even though it be one so small as mine, is, to my thinking, a matter which a man should not make in accordance with his own caprices,—or even with his own affections. He owes a duty to those who live on his land, and he owes a duty to his country. And, though it may seem fantastic to say so, I think he owes a duty to those who have been before him, and who have manifestly wished that the property should be continued in the hands of their descendants. These things are to me very holy. In what I am doing I am in some respects departing from the theory of my life,—but I do so under a perfect conviction that by the course I am taking I shall best perform the duties to which I have alluded.

A duty to country, those that depend on you, and to those “who have been before him”…it’s easy to say “how quaint and antiquated” about such an outlook, but those are the very things missing in many of the individuals as they focus solely on themselves. This sense of being part of a continuum and of a community is lacking in their character, leading them to behave foolishly. Roger (and Trollope) makes it clear that choices don’t always have to follow tried and true ways while keeping various responsibilities in mind.

Anti-Semitism
I waited to comment on the anti-Semitism in the novel until I had finished it and I’m glad I did. The Jewish characters at first appear to be a stereotype, unclean beings focused on commerce, banking and money. Most individuals disparage Jewish characters and avoid mingling with them because of the risk to their reputation. While it may be all right to do business with Jews, making them social equals is not a consideration for most of the characters.

With the introduction of Mr. Brehgert and his marriage proposal to Georgiana Longestaff, the stakes increase as does the response from the family. All hell breaks loose as the Longestaffe’s block the marriage with every means at their disposal. The irony lies with their willing and desired association with a swindler like Melmotte while Breghert’s character and behavior is truthful and respectful. Trollope’s portrayal of Breghert highlights the prejudice and shortsighted nature within other characters—not only should someone like Brehgert be an equal but should be emulated. The letter from Mr. Brehgert to Georgiana stands as one of the most open, truthful statements by any character in the book. In addition to pointing out prejudice, the letter allows Trollope to hit on one of his themes in the book about the inability or unwillingness of people to see things as they are. I’ll end with an excerpt from Brehgert’s letter:

As to my religion, I acknowledge the force of what your father says,—though I think that a gentleman brought up with fewer prejudices would have expressed himself in language less likely to give offence. However I am a man not easily offended; and on this occasion I am ready to take what he has said in good part. I can easily conceive that there should be those who think that the husband and wife should agree in religion. I am indifferent to it myself. I shall not interfere with you if you make me happy by becoming my wife, nor, I suppose, will you with me. Should you have a daughter or daughters I am quite willing that they should be brought up subject to your influence. …

But no doubt your father objects to me specially because I am a Jew. If I were an atheist he might, perhaps, say nothing on the subject of religion. On this matter as well as on others it seems to me that your father has hardly kept pace with the movements of the age. Fifty years ago, whatever claim a Jew might have to be as well considered as a Christian, he certainly was not so considered. Society was closed against him, except under special circumstances, and so were all the privileges of high position. But that has been altered. Your father does not admit the change; but I think he is blind to it, because he does not wish to see.