Heart of a Dog discussion 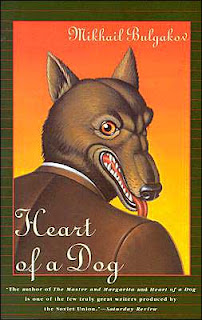 In the previous post I provided a summary from the back cover of Mikhail Bulgakov’s satirical work. You can see a preview of the translation by Mirra Ginsburg at Google books. This was the perfect book I needed after finishing The Histories and I know I will return to it again—I loved it and highly recommend it.

Heart of a Dog is set in Moscow during the early 1920s. Professor Preobrazhenski treats the sexual dysfunctions and aging issues of the powerful and well-connected. For his talent and discretion, he is provided many privileges in the Soviet system. In one of his medical experiments, he transplants the testes and pituitary gland of a recently deceased criminal into a dog, turning the dog into a man. Unfortunately for the professor’s household and the city's cats, the experimental man reverts to the manners of the criminal whose organs he received.

The professor articulates some of Bulgakov’s criticism of the Soviet system but the bulk of the condemnation comes from the parable itself. Mankind shows its ability to perform cruel or evil acts from the very start of the book as shown in the treatment of Sharik (the dog). After the experiment, the “new man” behaves mostly like a dog until his body and organs completely change. No longer with the heart of a dog but that of a man, he performs acts of cruelty. Any system that ignores what constitutes human nature in order to create a “new man” will suffer the same fate.

There is so much to enjoy and analyze in this short book but I don’t want to spoil the fun for anyone coming to it for the first time. I will mention some points I focused on as a first-time reader:

I was also able to watch the 1988 movie based on the book and it was one of the finest book-to-movie translations I have seen. The movie was faithful to the book with a few additional scenes that fit in perfectly. Evgeni Evstigneev as the professor and Boris Plotnikov as his assistant brought a professional acting background to the movie (Evstigneev was one of the bigger names in cinema at the time). Vladimir Tolokonnikov, an unknown, was supposedly found in a bar and chosen for the role of Sharikov (the ‘new man’) because the director thought he would fit the role. He does, holding his own with the professional actors. I highly recommend the movie, also.

Email ThisBlogThis!Share to TwitterShare to FacebookShare to Pinterest
Labels: Heart of a Dog, Mikhail Bulgakov, Movies

I've wanted to read Heart of a Dog for a while - I'm still not sure why I keep putting it off. I think I'm just a little worried that it won't live up to my Bulgakov expectations, after The Master and Margarita. And that's even though The White Guard did. My edition is also surprisingly heavy and every time I look at it, I feel: whew, that's a heavy one. Even though it really doesn't seem that way. And it does sound good.

This was the first Bulgakov I have read so I can't compare it to other works (although I did pick up Master recently at a local bookstore's sale and plan on reading it next year). I will say that Heart is a delight and I plan on revisiting it again since there is a lot there. The good news is that it can be as heavy or light as you'd like.