Off the beaten track, as usual 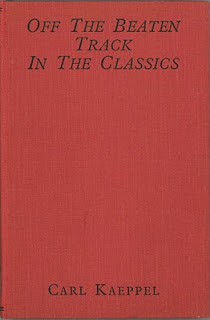 I started Bulgakov's Heart of a Dog this week and quickly fell in love with it. I also have a copy of the 1988 Russian movie that I hope to watch this weekend. For anyone not familiar with this short novel, it

"tells the story of a scroungy Moscow mongrel named Sharik. Thanks to the skills of a renowned Soviet scientist and the transplanted pituitary gland and testes of a petty criminal, Sharik is transformed into a lecherous, vulgar man who spouts Engels and inevitably finds his niche in the bureaucracy as the government official in charge of purging the city of cats." (from the back cover)

The other recent acquisition that I'm eager to dip into is Off the Beaten Track in the Classics by Carl Kaeppel. I found out about this book through a review by "Dr. Beachcombing" at Beachcombing's Bizzare History Blog. This excerpt is from Kaeppel's entry in the Australian Dictionary of Biography:

After the Armistice Kaeppel studied archaeology in England, his researches in the British Museum laying the foundation for his profound knowledge of ancient geography. He returned to Australia in August 1919 and next year was appointed classics master at Melbourne Church of England Grammar School where the headmaster R. P. Franklin, a former fellow teacher at Shore, was a close friend.

A voracious reader with a photographic memory, Kaeppel excelled as scholar and teacher. Although he lacked an ear for phonetics (and could not pronounce an r), he had not only an intimate knowledge of Greek and Latin but 'explored with indefatigable thoroughness' the lesser-known ancient languages. A short man, in grey slacks and a well-worn sports jacket, he was a firm disciplinarian in the classroom; he carried an ash walking-stick which he banged on the ground to emphasize points and reputedly could inspire even the recalcitrant idler. His 'lads' greatly respected him.

He lived in the school lodge, made generous, impulsive gifts to his friends from his extensive library, and was an habitué of the Savage and Naval and Military clubs. He was a spell-binding conversationalist. However, his heavy drinking increased with the years and in 1931 he was forced to leave Melbourne Grammar. He moved to Sydney where he lived by coaching and by freelance journalism. In 1932 he wrote A Short History of Latin Literature and in 1935 the fascinating Off the Beaten Track in Classics.

A. R. Chisholm, who considered him 'one of the three or four most eminent scholars that Australia has produced', described him as 'exuberant, but moody; purposeful, but nostalgic; almost blatant at times, but fundamentally shy'.

The index page is at the end of this post and the listed essays "are based, in the main, upon the author's reading when working in the British Museum." (from the jacket cover) I'll probably mention these essays in posts as I get to them. (For anyone not familiar with the term "periplus", which until this week included me, a definition can be found here). 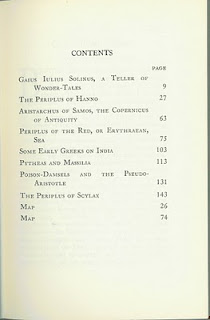 Email ThisBlogThis!Share to TwitterShare to FacebookShare to Pinterest
Labels: Carl Kaeppel, Footnotes, Nonfiction Essays, Off the Beaten Track in the Classics