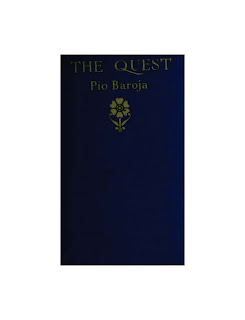 The Quest by Pío Baroja
Translated by Isaac Goldberg
Alfred A. Knopf, 1922, 289 pages

Online resources for Baroja and The Quest, including links to the text, can be found here.

La Corrala was a seething, feverish world in little, as busy as an anthill. There people toiled, idled, guzzled, ate and died of hunger; there furniture was made, antiques were counterfeited, old embroideries were fashioned, buns cooked, broken porcelain mended, robberies planned and women's favours traded.

La Corrala was a microcosm; it was said that if all the denizens were placed in line they would reach from Embajadores lane to the Plaza del Progreso; it harboured men who were everything and yet nothing: half scholars, half smiths, half carpenters, half masons, half business men, half thieves.

In general, everybody who lived here was disoriented, dwelling in that unending abjection produced by everlasting, irremediable poverty; many sloughed their occupations as a reptile its skin; others had none; some carpenters' or masons' helpers, because of their lack of initiative, understanding and skill, could never graduate from their apprenticeship. There were also gypsies, mule and dog clippers, nor was there a dearth of porters, itinerant barbers and mountebanks. Almost all of them, if opportunity offered, stole what they could; they all presented the same pauperized, emaciated look. And all harboured a constant rage that vented itself in furious imprecations and blasphemies.

They lived as if sunk in the shades of a deep slumber, unable to form any clear notion of their lives, without aspirations, aims, projects or anything. …

From time to time, like a gentle sunbeam amidst the gloom, the souls of these stultified, bestial men,—of these women embittered by harsh lives that held neither solace nor illusion,—would be penetrated by a romantic, disinterested feeling of tenderness that made them live like human beings for a while; but when the gust of sentimentalism had blown over, they would return to their moral inertia, as resigned and passive as ever.

At one point in The Quest Pío Baroja plays with what his novel should look like, musing that elevating his language will get him elected to the Spanish Academy. Thank goodness he didn't go that route. The Quest’s language is anything but pedestrian as he explores Madrid’s coarser side. The Quest follows Manuel, the son of a boardinghouse maid, as he bumbles through adolescence and poverty. The colorful characters that Manuel meets make the book a pleasure to read. At times Baroja paints an ugly picture, but because he avoids the “noble poor” trope the examples of kindness and integrity shine all the brighter.

Manuel survives various changes in status, starting with his uncle sending him to Madrid and his mother (Petra) in order to learn a trade. The summary from The Nation (at the resources link) lists Manuel’s different jobs: “He is the servant in a boarding-house, a shoemaker's apprentice, a ragpicker's assistant and the associate of thieves, passing through the strangest scenes and constant fluctuations of good fortune.” The good fortune, such that it is, occurs infrequently or on a limited basis for all the characters. Good luck can involve earning, finding or stealing a couple of céntimos. Or in the case of the student Roberto Hastings, making progress on restoring his family fortune (worth millions) buoys and sustains him.

Manuel, a shy and sensitive teen, is more a spectator of life than a participant. He views much of the action around him, whether that of the urchins or polite society, with detachment and disgust. The malevolence of the urchins repulses him and keeps him on the sidelines of many schemes. The plots he participates in are done half-heartedly. Branded a loafer several times, honest work does not scare Manuel although the mindlessness of some tasks or the disproportionate share he is required to perform drives him to shirk his duties at some point. His dreams are limited: “Manuel thought that if in time he should become the owner of a little house like Señor Custodio’s, and of a cart and donkeys, and hens and a dog, and find in addition a woman to love him, he would be one of the almost happy men in this world.” (page 259)

Manuel’s burgeoning sexual desires, causing feelings he can’t control the same as others, frustrate and distract him. “It was during these libidinous spells that dark, sinister thoughts assailed him,--the notion of how useless his life was, the certainty of an adverse fate,--and as he considered the vagabond, abandoned existence that awaited him, his soul walked with bitterness and sobs rose in his throat….” (page 270) His normal melancholy transforms into despair as he realizes he cannot obtain his heart’s desire, Justa. The examples of love he has seen have usually been perverse or violent, adding to his confusion and frustration. Manuel finds love, just like the rest of life, inscrutable.

A word about the title The Quest (La Busca). Plenty of characters, including Manuel, search throughout the novel for food, shelter, pleasure, or love. Manuel’s search goes deeper, examining society and his life, looking for meaning and his place within it. Near the end of the book, Manuel passes a worker commenting on all the urchins, “There’s no good left in any of them”. This remark bothers Manuel. “Why wasn’t he good? Why? He examined his life. He wasn’t bad, he had harmed nobody. … Then contradicting himself, he imagined that perhaps he was bad after all, and in this case the most he could do was to reform and become better.” (page 287) Considering all that life had dealt him, this would be easier said than done. Yet the book ends on a positive note as Manuel watches people thronging the streets at night, sliding in and out of cafes, gambling dens, and brothels. “He understood that the existence of the nightowls and that of the working folk were parallel lives that never for an instant met. For the ones, pleasure, vice, the night; for the others, labour, fatigue, the sun. And it seemed to him, too, that he should belong to the second class, to the folk who toil in the sun, not to those who dally in the shadows.” (page 289)

Baroja takes the reader through the coarser side of Madrid and its suburbs, providing laughs in addition to heartbreak. While following Manuel along these paths, there is an undercurrent that the current situation of disparity cannot hold. Baroja’s portrays all of his characters with the vitality and dignity of experience, providing what feels like a record of Madrid 100 years ago. I look forward to reading the next two volumes in the trilogy.

Email ThisBlogThis!Share to TwitterShare to FacebookShare to Pinterest
Labels: Pío Baroja, The Quest