"I was attended, I now know, by an angel—a presence of trust" 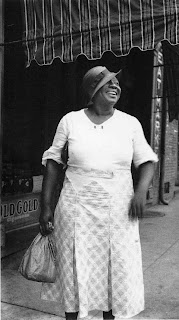 "In the Bag" by Eudora Welty
Picture source

This month's Transatlantica has several pieces on the Eudora Welty centennial last year. Of interest to me was Welty's photographs, taken in the 1930's when she worked as a publicity agent for the Works Progress Administration. Alison Goeller writes in her essay accompanying the above picture that

“In the Bag” was one of dozens of photos of impoverished black women that Welty shot as a junior journalist for the WPA in the 1930’s. Although she was white and middle-class, she was not met with the hostility that some of her fellow journalists and photographers faced. In fact, Welty said her subjects seemed to trust her in ways that were unusual. “In taking […] these pictures, I was attended, I now know, by an angel—a presence of trust. In particular, the photographs of black persons by a white person may not testify soon again to such intimacy. It is trust that dates the pictures now, more than the vanished years”.

Several of her stories, including "Why I Live at the P.O.", were inspired by her photography project. 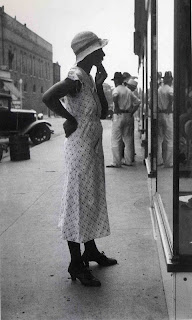 Excellent side-trip and reminder. Thanks.