Automedon with the Horses of Achilles by Henri Regnault
Picture source

And Iris racing the wind went veering off
as Achilles, Zeus’ favorite fighter, rose up now
and over his powerful shoulder Pallas slung the shield,
the tremendous storm-shield with all its tassels flaring—
and crowning his head the goddess swept a golden cloud
and from it she lit a fire to blaze across the field.
As smoke goes towering up the sky from out a town
cut off on a distant island under siege…
enemies battling round it, defenders all day long
trading desperate blows from their own city walls
but soon as the sun goes down the signal fires flash,
rows of beacons blazing into the air to alert their neighbors—
if only the’ll come in ships to save them from disaster—
so now from Achilles’ head the blaze shot up the sky.
(Book XVIII, lines 233 – 246, all translations by Robert Fagles)


Achilles came to Troyland
And I to Chersonese :
He turned from wrath to battle,
And I from three days' peace.

Was it so hard, Achilles,
So very hard to die ?
Thou knewest and I know not-
So much the happier I.

I will go back this morning
From Imbros over the sea ;
Stand in the trench, Achilles,
Flame-capped, and shout for me.
-- excerpt from an untitled poem by Patrick Shaw-Stewart

One of my favorite sections so far, but I’ll only be able to do it partial justice. I will focus on a few of the themes and motifs from this section:

Achilles armor—the tie-in between Achilles’ armor and death becomes explicit. After Patroclus dies, Hector puts on the armor while Zeus watches and comments on his impending death. The original audience would know of Achilles’ later death in battle as well as the greater Ajax’s suicide (over not being granted the armor), making it one of the most cursed props in literature. The new armor made by Hephaestus stuns all Achilles’ countrymen so much they can’t look at it. There has been much written elsewhere on the shield, the centerpiece of the new armor. I’ll just mention that the entire cosmos is presented, with special mention on the two cities depicted. One city is at war while the other depicts a wedding and a trial, showing many of mankind’s characteristics and achievements: life, death, joy, sorrow, agriculture, justice, kindness and malice. While it is a cliché, in a sense Achilles carries the world on his arm into battle.

Man’s lowly state—there have been many references by the gods on the pitiful state of mankind, but many more comments and allusions to our lowly state populate this section. Some comments are direct, such as Thetis’ mourning for Achilles’ short life or her resistance to marrying a mortal man. But I wanted to expand on one device used by Homer that directly and subtly addresses the gods’ view—Achilles’ immortal horses. I believe it was in Book XVI when these horses, yoked to one regular horse (which died in battle and was cut loose), were introduced. But in Book XVII the immortal horses weep over Petroclus’ body (and had been since his death).

And Zeus pitied them, watching their tears flow.
He shook his head and addressed his own deep heart:
“Poor creatures, why did we give you to King Peleus,
a mortal doomed to death…
you immortal beasts who never age or die?
So you could suffer the pains of wretched men?
There is nothing alive more agonized than man
of all that breathe and crawl across the earth.

A no-so-great view of the human condition, but one that makes sense coming from a god. The gods are immortal, never suffering the “doom” of death but they are aware of it. Animals die, but they are not aware of their looming death. Man will die and is aware of his impending death, elevating (or rather lowering) them in the gods’ eyes the most pitiful of creatures. The gods have their favorites among the humans, especially their offspring, and the death of a beloved usually yields the only time they show emotion at a mortal’s death. Zeus mentions that “the mortals do concern me, dying as they are.” By yoking immortal horses to a human, Zeus realizes that he has involved them with “wretched men” and they will suffer because of that. There is grief even when the gods grant everything that man wants, as Thetis reminds Achilles that Zeus has done given him all he wanted (while taking away a lot as well). Death is part of the human condition even if a mortal chooses not to accept it. The irony of the warrior culture and of kleos comes from man achieving glory (and a type of immortality) through actions centered around death.

Glory and death—the resolution between Achilles and Agamemnon is a bit of a let-down after the rancor shown between them. Agamemnon offers to give all the gifts offered from the embassy visit, but Achilles says he doesn’t care if he receives them or not. Achilles is beyond the traditional concepts of timê or kleos, focused solely on revenge. Agamemnon still operates based on those concepts however, forcing the soldiers to view the conferment of gifts. Hector operates under these concepts as well, explicitly linking glory and timê when offering half of his spoils to the soldier who secures Petroclus’ body: “His glory will equal mine!” Another linkage, implied up until this point, occurs when Achilles explicitly chooses death and glory after Petroclus’ death by seeking revenge. 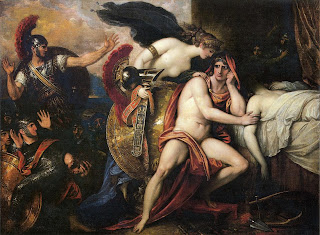 Achilles: dead or god-like?—also at this point Achilles seems anything but human. On hearing of Patroclus’ death, he sprawls in the dirt with grief, appearing dead himself. When Thetis arrives at Achilles’ tent she cradles his head, mimicking the Greek artistic convention of mourning the dead. At times, the language used to describe Achilles portrays him as lifeless, while at other times he turns his back on life and death. He refuses to bury Patroclus until he has killed Hector, in a sense not accepting his death (although Thetis also encourages him to do this). For himself, Achilles shuns food and drink and other normal human activity. Athena infuses Achilles with ambrosia and nectar to offset his fasting. While this seems to associate him with god-like activity, it also resembles Thetis’ treatment of Patroclus’ body with ambrosia and nectar in order “to make his flesh stand firm” and not decay. At other times, Achilles is so far beyond normal or acceptable behavior, his anger diffused toward everything around him. He vows human sacrifice. He does not consider a suppliant’s pleas. His rage, supplemented with help from the gods, makes Achilles appear like a force of nature.

Achilles and flames--The use of flame imagery has been used in The Iliad several times up to this point, but starting with Book XVII the description of Achilles or his armor in terms related to fire is repeatedly hammered home. Fire was a stolen gift from the gods, useful to man when controlled but dangerous when out of control. Achilles’ actions take him well beyond any sort of control. Just a few of the references: flame-capped Achilles appearing before the Trojans (see the quote at the start of this post), his armor made by the god Hephaestus, similes to nature “like inhuman fire raging on through the mountain gorges”, and his blazing armor. The repetition adds to the feeling that Achilles is beyond human, a force of nature. In an interesting foreshadowing when the gods choose sides and line up against each other now that they are free to enter the fray (early in Book XX), Hephaestus lines up against the river god of the Scamander. File that tidbit away for the next discussion.

Aeneas--On the Trojan side, Hector claims the role of principal or greatest fighter. Very few other Trojan soldiers are shown over the course of the work, Aeneas being one that is given a higher supporting role. He distinguishes himself in battle each time and directly faces Achilles in Book XX. While this is a minor point in the overall tale, the reason the gods protect him from death at Achilles hands will lead to the basis of Virgil’s The Aeneid. It has been interesting to mentally note his exploits and Book XX is where he is given the most exposure in the tale.

The final four books are next. I wasn’t sure what else to do in conjunction with The Iliad. I’ll see if my library has An Iliad by Alessandro Baricco as I would like to see how her first persons’ narrative compares to the original. 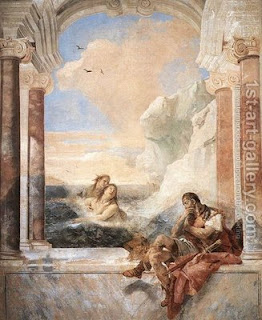 Email ThisBlogThis!Share to TwitterShare to FacebookShare to Pinterest
Labels: Homer, The Iliad

Thanks Bill. Take a look here for links to the other posts about The Iliad.