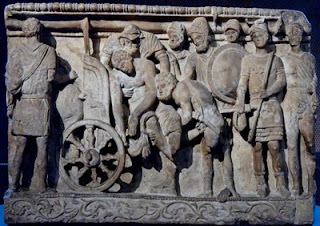 Book XIII continues the battle among the ships. The Achaeans are now fighting a defensive battle, trying to protect their only way home. The ebb and flow of the battle changes as the gods participate. Zeus has instructed no interference from other gods, but Poseidon disobeys while Zeus’ attention is elsewhere. The gods inspire and hinder the humans in battle, influencing a marked change in the individual they choose to manipulate. I had mentioned in the previous post about memorable deaths in The Iliad and this book contains another two that stayed with me long after the first reading. The first one is Imbrius:

So the rampaging, crested Aeantes hoisted Imbrius high,
stripping his gear in mid-air, and the Little Ajax,
raging over Amphimachus’ death, lopped the head
from the corpse’s limp neck and with one good heave
sent it spinning into the milling fighters like a ball,
right at the feet of Hector, tumbling in the dust. --all translations by Robert Fagles

The second involves Alcathous, a spear struck through to his heart while “the heart in its last throes jerked and shook the lance— / the butt-end quivering into the air till suddenly / rugged Ares snuffed its fury out, dead still.” The work pulls no punches in depicting the reality of battle.

The involvement of the gods in battle calls forth comparisons and contrasts with the humans. The basic premises regarding differences between mortals and gods are always front and center—in particular, the immortality of the gods. But there are additional subtle comparisons that accumulate and add significantly to the differences. In Book XIII, Poseidon travels to the battle in his chariot with “the bronze axle under the war-car never flecked with foam”, which is in direct contrast to a recent description of the underside of soldiers’ chariots soaked in blood. Also, in The Iliad a soldier’s aristeia (his preparation for battle, the description of his armor and arms, and his performance of outstanding exploits) has an amusing contrast with Hera’s aristeia (or at least I think it can be so described) in Book XIV. She dresses and “arms” herself to seduce Zeus in order to distract him from the battle in the same manner as a soldier. The contrast between her preparing for seduction and Diomedes (or Petroclus, or Hector, or Achilles, etc.) arming for battle highlights the difference in what is at stake between humans and gods.

Hera’s seduction of Zeus becomes comic relief to the slaughter around Troy. The scene itself is humorous, compounded by Zeus’ comments on how aroused he feels. Their interlude happens while the battle continues, Hector being hit and stunned on what was supposed to be his day of glory. Meanwhile, Agamemnon suggests yet again that the Achaeans should leave under cover of night, the third time he has said this and apparently the second time he has meant it. Odysseus and Diomedes upbraid him again on his fecklessness. The arguments against leaving start with the soldiers’ code and appeal to honor, ending with discussing how impractical such a retreat would be.

The speeches on glory stand out even more in this section since the fighting is at its most intense. Poseidon encourages the Achaeans in many ways, including shaming those holding back in the lines (“the worthless coward who cringes from fighting”). In Book XV there are several stirring speeches appealing to the code of the warrior. The first is from the great Ajax:

Dread what comrades say of you here in bloody combat!
When men dread that, more men come through alive—
when soldiers break and run, goodbye glory,
goodbye all defenses!”

Nestor’s admonition takes the same tack and goes even deeper:

”Be men, my friends! Discipline fill your hearts,
maintain your pride in the eyes of other men!
Remember, each of you, sons, wives, wealth, parents—
are mother and father dead or alive? No matter,
I beg you for their sakes—loved ones far away—
now stand and fight, no turning back, no panic.”

A topic I found of special interest in this section revolves around the interaction of gods and fate. In Book XV Ares sets out to avenge the death of his half-mortal son, Ascalaphus, until Athena talks him out of it. Ares’ and Athena’s main concern is retribution from Zeus for interfering in the battle. More complicated is Zeus’ feelings toward his son Sarpedon. Early in Book XV, Zeus lays out what will happen regarding all the principle characters including the death of Sarpedon, having foresight into the fates of humans. Yet in Book XVI Zeus wants to save his mortal son from death at the hands of Patroclus until Hera talks him out of interfering in the battle. While the gods could change a human’s fate, the obstruction of what was fated is definitely frowned on (especially since the intrusion into one fate would cause a proliferation of interference from the gods). Sarpedon’s death and Zeus’ actions to protect the corpse foreshadows divine interaction after Hector’s death.

Book XVI focuses heavily on Patroclus’ aristeia, which leads to his death at the end of the chapter. There is a lot that can be read into the relationship and comparison between Patroclus and Achilles, but even at just the superficial level (Patroclus caring for wounded a wounded soldier while Achilles stews in his camp) is enough to highlight the differences. Achilles compares Patroclus’ concern for his fellow soldiers to that of a little girl clinging to her mother’s skirt. After his amazing speeches in Book IX, revealing his dual fates and musing on the ultimate end of all mortals, his speeches to Patroclus seems to be a major step back to a one-dimensional character. His concern for Patroclus is less on his proxy’s safety and more on potential imposition on Achilles’ glory. Achilles admits he was not planning on staying angry at Agamemnon forever. While he doesn’t mention his dual fates directly or his choice between them, the resolution has been spelled out already by Zeus. In addition, the choice is implied with Achilles’ focus on glory—if it is glory he seeks, the outcome is preordained. I suppose the selfish focus of Achilles is not completely at odds with his speeches in Book IX, but his earlier concern for extending life is in contrast to achieving glory.

The appearance of Patroclus in Achilles’ armor demonstrates the respect given Achilles. The interaction between humans and gods takes on additional dimensions throughout these books. At one point in the ensuing battle Hector panics and flees due to the fear put into him by a god. Patroclus tries to lessen Hector’s glory in battle, noting that Hector was the third one to inflict damage. The first was Apollo who stripped Patroclus of some of Achilles’ armor, setting him up for death (the start of the relationship between Achilles’ armor and death). The ancient Greek connection between near-death and prophecy surfaces as well, with Patroclus (as he is dying) foretelling Hector’s fate. Hector laughs at the prophecy, saying he may be the one to strike Achilles instead. Yet Zeus has already foretold what will happen, making Hector’s taunts sound hollow. Like the earlier speech to his wife, it is as if Hector comes close to seeing what will happen but is unable or unwilling to fully recognize it. The death of Patroclus sets into motion the final actions sealing the fates of Hector and Achilles. 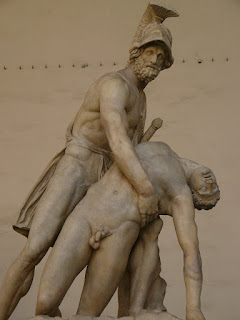 Menelaus supporting the body of Patroclus
Picture source
Posted by Dwight at 11:11 PM

Email ThisBlogThis!Share to TwitterShare to FacebookShare to Pinterest
Labels: Homer, The Iliad