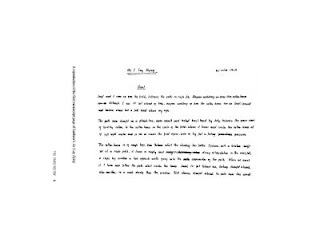 A reproduction of the first manuscript page of As I Lay Dying
Picture source
(Warning: large .pdf file)

I finally have a few moments (and an internet connection) to write something on the first third of As I Lay Dying and I’m at a loss on how to approach it. The first thing most analyses note on the book is the string of interior monologues that moves the narrative along. The monologues follow a semi-linear chronology with an occasional overlap. In school I always resisted the teachers’ advice to focus on aspects about the narrator, but at some point the importance of doing so finally sank in. For this work it is crucial. While listening in on the characters thoughts, the reader has to judge how much to believe. For example, in section six Cora Tull makes several statements contradicting what Darl said in the preceding section. Which character’s report is to be believed? Most of the monologues are upfront about what the characters see themselves versus what is second-hand information, but, as always with Faulkner, revelations can be piecemeal and out of order.

The reader’s questions have to go beyond characters judging each other or reporting what happens and extend to the characters’ self-analyses. Dewey Dell’s excuse that she couldn’t help her actions with Lafe indicates important characteristics regarding her make-up (buttressed, among other things, by her inability to ask Peabody for assistance while obsessing on how much he could help her). Other attributes in the narration reinforce and highlight qualities within characters. Darl’s knowledge of things without being told (Dewey Dell’s pregnancy for example) extends to his ability to narrate events happening elsewhere (Addie’s death scene or Jewel in the barn) while every other character is limited to their own experience. For lack of a better description, he is a “knower”, an amazing (but I find not very likeable this time through the work) literary creation.

The actions of the Bundrens provide a fascinating glimpse in family dynamics. Jewel’s only monologue of the book in section four shows him wanting to protect Addie, not so much from outsiders as from the family. What she needs protecting from becomes more apparent as the reader finds out about the members of the family. The dysfunction manifests itself in what each family member hopes to get from Addie’s death and the resulting trip to bury her. That Addie wants to be buried with her family in Jefferson, forty miles away, instead of New Hope with the Bundren family (only three miles away) highlights the alienation that can be felt even when surrounded by family/people. Aloneness, a theme throughout the book, stands in contrast with the solidarity demonstrated by the family at times. The unified front the family demonstrates toward most outsiders comes through in this section while watching the family interactions with Vernon Tull and Dr. Peabody.

The relationships within the family develop as the monologues unfold. How Darl and Jewel act when leaving Addie (who will possibly die before they return) does not necessarily reflect how they feel about her. The inability to say or show feelings leads the reader to watch the characters’ actions for clues on their true thoughts. In this manner it is easier to understand Cash constructing Addie’s coffin under her window, the way he shows his compassion as well as his way of feeling useful. Dewey Dell and Darl’s relationship proves to be one of the more troubling parts of the book. Most analyses of As I Lay Dying describe it as almost incestuous, but I’m not sure that is correct. Dewey Dell is aware of her sexuality, and with Darl’s seeming gift of being aware of other’s thoughts he will be aware of it as well. Lost in his thoughts and emotions (as compared to Cash’s grounding in physical things), Darl will muse on the implications of her heightened sexuality. Which is not to say they aren’t close, but (I think) the incestuous feelings described in some analyses simplifies what is going on with both characters. Their closeness manifests itself in many ways. Their ability to communicate without speaking shows just one of many uncommon aspects of their relationship. In some ways, their interaction reflects their self-identity.

The character’s view of themselves—working through their existence and identity—permeates the monologues. Darl focuses on this theme often, giving a Hamlet-like feel in section 17.

In a strange room you must empty yourself for sleep. And before you are emptied for sleep, what are you. And when you are emptied for sleep, you are not. And when you are filled with sleep, you never were. I dont know what I am. I dont know if I am or not. Jewel knows he is, because he does not know that he does not know whether he is or not. He cannot empty himself for sleep because he is not what he is and he is what he is not. … And since sleep is is-not and rain and wind are was, it is not. Yet the wagon is, because when the wagon is was, Addie Bundren will not be. And Jewel is, so Addie Bundren must be. And then I must be, or I could not empty myself in a strange room. And so if I am not emptied yet, I am is.

This echoes earlier sections by Vardaman and Dewey Dell who use similar language in raising questions or phrases about existence. Vardaman, with a child’s voice, is limited in describing things as “are” and “are not”, as the fish he caught becomes a “not-fish” after cleaning it. He expands this concept to include his mother as he tries to understand her death. Darl’s focus turns more and more inward. He begins to lose his grip on reality and, it seems to me, realizes his increasing distance from it. His language slips to the level of Vardaman at times. These two are the most focused on existence, working well beyond simple semantics and questioning meaning and, in turn, causing them to perform the most damaging actions in the book. Additionally, Dewey Dell begins to see everything through the lens of her pregnancy, the encounter with the cow (extremely sensual in detail) leading her to muse on women’s role and the impact it has on her.

There is a religious feel underpinning the book, with Cora Tull the central character (so far) embodying a Christian outlook. The problem comes from her being a poor example, embodying the worst aspects of it while shunning most appealing tenets. While some language alludes to the Bible, they are infrequent. Yet these appearances, along with the upcoming journey (a cross between Exodus and the Apocalypse) give a biblical feel to the story beyond just the language and Cora’s sermonizing.

There are other themes that get more development in the upcoming sections so I’ll save them for later.

Email ThisBlogThis!Share to TwitterShare to FacebookShare to Pinterest
Labels: As I Lay Dying, William Faulkner

Oh Dwight--where were you and these posts when I read this book several years ago? I read The Sound and the Fury as an undergrad and adored it. But I also had a wonderful teacher guiding us through the difficulties of Faulkner. The next semester we read Sanctuary, which is much more accessible. I read this one on my own--and goodness gracious. Love the Burdens and find them fascinating--as I do all of Faulkner's intensely complicated characters. Love Faulkner and his long sprawling sentences and paragraphs...but...

I do have A Light in August on my "want to read one day" list, though. Not giving up on Faulkner yet!

Light in August is by far my favorite Faulkner, and while it is accessible it is also a profoundly troubling work. I "discovered" Faulkner while dating someone from Ole Miss and read as much as I could the summer I was visiting in Oxford. I remember reading a description of a house, presumably in Memphis, and looking up (in Oxford) to see the house upon which he must have modeled it...a strange feeling, indeed.