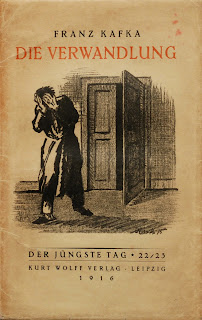 Picture source
From the Franz Kafka Biography site: The cover illustration is a lithograph by Ottomar Starke. When Kafka learned that Starke was to do an illustration, he wrote: "The insect itself must not be illustrated by a drawing. It cannot be shown at all, not even from a distance".

Online resources for Franz Kafka and The Metamorphosis can be found at this post.

There has been much scholarly ink spilled on The Metamorphosis so I know I won’t be bringing anything new to the table. Instead I’ll focus on a few of the areas that interested me upon my first reading of this powerful story.

The narration of the story struck me immediately, with most of the narration through Gregor Samsa’s consciousness and an occasional shift to a third person narrator. When reading it is important to keep the perspective in mind in order to know what is fact and what is opinion. The motives of the family members are usually described through Gregor’s eyes and he is extremely generous when attributing the reasons for their actions. Because he is so charitable in his dealing with his family, he assumes their actions toward him spring from feelings similar to his. Is he right or wrong? Kafka is a master at ambiguity. The actions of the family members after Gregor’s death, narrated (necessarily) from an omniscient third person, help shed some light on what they might have really felt during Gregor’s transformative stage.

Even with those clues, it is still difficult to fully explain the reasons behind their actions. The title of the work could have easily been titled The Metamorphoses since all of the family members undergo dramatic changes. It is clear that selfish reasons drive much of their behavior, but at some point their behavior does change in order to plan for the future and help the family (or what is left of it in their eyes). Even then, the comparison with Gregor paints them in an unflattering light since he selflessly sacrificed in order to help the family versus their constant complaining “Why did this happen to us?” attitude. I don’t recall Gregor ever questioning events. Instead he tried to help the family and was relieved to see things improving for them. His feeble and ineffective attempts at communicating with them is in stark contrast to their thinking him incapable of understanding (and thus they stop trying).

Kafka’s writing connects on several levels and I think it is easy to read as much as you want to into his work. For example, I don’t think the relationship in the story between Gregor and his father is meant to represent the relationship between Kafka and his father. Yet it is part of a family dynamic that Kafka wants to highlight, that home is not always a warm and nourishing place. The marginalizing shame and impotence that the father feels after his business fails gradually transfers to Gregor after his metamorphosis. The mother is the one family member that still believes (or at least is open to the idea) that the insect is still Gregor, that he can understand what is being said and how they are treating him. Yet she is too weak, both in physical and character strength, to improve his treatment by the other family members. The distance between Gregor and his family seems to be represented by the ever-present doors between them.

Gregor’s physical transformation happens overnight, but it takes a while for him to lose his “humanness.” His family, on the other hand, seems to be the true insects (or parasites) during the story, rarely achieving human or humane status. Gregor’s gradual loss of senses and ability mirrors his shrinking as a human—speech, taste, sight, mobility all diminish over time. All of these losses also diminish his contact with other humans and his family—his alienation begins with the outside world, moves to his family, and ultimately lodges in himself. The marginalization of Gregor is a huge blow as he took pride in his accomplishments and contributions at work and at home. As the chance of his resuming that role in the family weakens, he initially feels relief that they will be all right, but that is gradually replaced by something akin to nihilism. There is no longer a reason for him to exist. The one feeling that remains for Gregor is pain, which started when he awakened in an insect state and he tried to move his body. His body is in constant pain after the apple is lodged in his back, and while that dulls somewhat over time, his mental pain increases. He had been able to justify the inconveniences and sacrifices he made, but now that is no longer possible.

The term “Kafkaesque” seems to be overused at times, often simply describing a situation that is puzzling or surreal. So what makes The Metamorphosis Kafkaesque? To answer that question, I would point to the strictly rational action that follows the improbable, grotesque transformation. Gregor wakes up as a giant insect, and instead of pondering the change, he plans to catch the next train to work. In order to accomplish that, he looks at the (ordinarily) minor hurdles he must now transcend—getting out of bed, opening the door, etc. Everything flows in a completely rational manner as long as you accept the enormous transformation premise in the first sentence. The change unmoors Gregor and his family, but it also reveals what is underneath the fragile surface. It is as if a grotesque and impossible presentation exposes the true nature of things. Another Kafkaesque treatment is the inability to identify how to solve the problem. Because the situation itself is inexplicable, there is no possible valid solution despite multiple attempts in a rational manner to find one.

There is a risk that comments on this work would exceed the length of the story. So to avoid that fate, I’ll simply note a few other items that interested me:

That Kafka’s ambiguity and uncertainty can resonate within the reader on multiple levels is a testament to his achievement. I have avoided reading his work since college because I found much of it troubling and exasperating. If my enjoyment of The Metamorphosis is an indication, I intend to read the beauty, troubling and comic, within more of his works.

Email ThisBlogThis!Share to TwitterShare to FacebookShare to Pinterest
Labels: Franz Kafka, The Metamorphosis

I think in this case the 'metamorphosis' (singular) refers to that of the sister Grete. (The ending of the story seems to confirm this impression of mine.) Her initial 'sympathy and kindness' towards Gregor, I think, is perhaps symbolic of a sort of power shift dynamic, that Grete sees her opportunity for control over his well-being as a way of sort of taking over his initial role (as provider/ dominant figure in the family).

In that sense I think the entire narrative is just one huge detractor - and this is why, unlike the readers, none of the characters seem struck by the absurdity (as opposed to the catastrophe) of the whole situation. The physical metamorphosis is far less absurd compared to the true intents of the family that are revealed through their reaction to it.

Sorry for such a long rant on a two-year-old post. :)

No need to apologize Milly...it's a wonderful story and open to multiple layers of interpretation on the different metamorphoses or singular metamorphosis, as you lay out.

The thing that sticks with me a couple of years later is the humor. I definitely want to visit this again soon as well as other Kafka works.

I wonder if the cockroach in the story is really a representation of how the father felt about himself, but because Gregor (and Kafka) basically identified with the father, they also "agreed" to take on the father's self-hatred and despair so he didn't have to. Gregor says, "what's happened to me?" Well, maybe he unwittingly became what his father actually felt about himself but was too much of a coward to acknowledge and address himself and instead dumps it onto his son.

Interesting approach. I'll have to re-read this and keep that in mind!